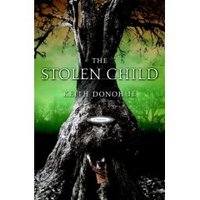 I admit that when I started The Stolen Child by Keith Donohue, I didn't think I would finish it. At first it struck me as a bit twee and I felt as though it was talking down to me, as though I had only ever heard of fairies like Tinkerbell and needed to be informed of the much darker myths. What with the popularity of Jonathan Strange and Mr. Norrell (which I quite enjoyed), I think much of his readership is prepared for faeries (spelling change intentional) who don't have wings and wands, but are grungy, fierce and wild. It always bugs me when a writer underestimates the intelligence of his readers.

But the story grew on me. The structure, alternating chapters between the stolen child who lives with a band of faerie children in the woods and the changeling who took his place and lives his life, was surprisingly effective. Often this kind of predictability starts to bug me or becomes tiresome, but this time the simplicity worked.

The middle section, in which both characters are trying to access their buried memories neither with terribly happy results, is the most compelling. I quite like the emphasis of the ending, about finding love where you are and not continually hankering after what isn't there, but I was turned off by the musical "apology" that the adult Henry Day writes to the faerie child Henry. I think I preferred the adult Henry as a character who was motivated and entranced by music (due to his pre-changeling time as a piano prodigy) but I didn't need this to culminate in a symphony, something more subtle would have been better for me--a tune that the faerie overheard from his studio window, perhaps, rather than the public adulation and performance. The symphony was just too bombastic. I think it is very difficult to write about other art forms in fiction--the most recent example that I found excruciating to read was the "artist"/wife character in The Time Traveller's Wife (which I and my book group intensely disliked for many other reasons too).

Can anyone think of a novel that writes about another art form effectively? Where it doesn't seem to be the author begging you to believe that the character in question is soooooo special because of this talent that they will describe to you ad nauseum? It seems like the worst case of the fiction rule that you should "show" not "tell".

I still don't think that the actual language of The Stolen Child is very good--the writing is serviceable and there is so much that could have been enhanced with this subject with prose that is a bit less safe. Also, there were a number of cultural slips that struck me as sloppy. For example, the story is set in some nameless east coast U.S. town and when the stolen child of the title decides to run away, he stuffs his pockets with biscuits, not cookies (and they weren't talking about the baking soda variety). There were a number of these little slips and it made me feel as though the author got a little carried away with the fact that the bulk of faerie stories come from Europe and so he inserted a few little Britishisms. The book won't be going on my recommended books list, but if you really have nothing to read, this one is worth looking at for the middle bit. 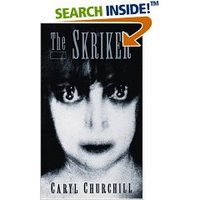 The book made me think of a play that I saw at the Royal National Theatre back in 1994, Caryl Churchill's The Skriker. In 64 pages, Churchill presents the nightmare of a shape shifting/changeling faerie that is so intense it permeates the viewer. I left this play unable to get the images and language out of my head, appropriately haunted by the performance I saw. Talk about a writer who doesn't underestimate the intelligence of her audience. So The Stolen Child leads me to recommend to readers who are attracted to the dark faerie tales this hallucinatory play.
Posted by Kate at 4:17 PM

The author provides a number of clues to indicate the Stolen Child is set in Western Pennsylvania - Pittsburgh is the city where Henry takes his piano lessons.

There is a reference to the Penn Theatre and Duquense University - both are located in Pittsburgh although the Penn may no longer exist.