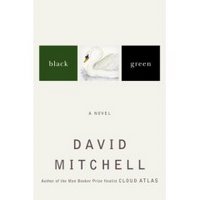 Good god I'm on a lucky reading stint! (Which isn't that big of a surprise considering the number of books I currently have checked out of the library....)

Black Swan Green by David Mitchell is my latest literary thrill. The book is composed of thirteen chapters which comprise thirteen stories about thirteen year-old Jason Taylor. There aren't obvious transitions between stories, but they are all clearly connected even when their tone varies widely from nearly gothic moments in "January Man" and European philosophy in "Solarium" to contemporary political repercussions of Thatcher and the Falklands war in "Stones" and the liberated ecstasy of a boy in nature in "The Bridle Path". There is a load of complexity lying beneath the simple surface plot of a year in a 13-year old boy's life.

What ties all the disparate parts together is the main character who allows us to understand both the cruelty and the beauty of a 13 year old boy. Jason's awareness of social castes and rites does nothing to help him get through life any easier than anyone else. Instead he shows us all the stumbles and excruciating moments as he navigates a year while writing poetry under a pseudonym, trying to avoid the local bullies and confronting daily wrestling matches with "Hangman," which is what he names his stammer. There are moments of longing and joy and excitement as you watch Jason's maturation over the course of the book. I may have related to Jason even more closely when I realized that I was the same age as the main character in the year that the book is set, 1982.

The writing is beautiful and Jason's internal observations (things he'd never dare say aloud) can give you shivers, like this line, "Listening to houses breathe makes you weightless". To go from shimmery prose like this to the condensed slang of adolescent boys (everything is "epic", that is, until that word is no longer hip) gave me an appreciation of the variety of prose in which Mitchell is proficient. There is so much British slang used in the book that it serves as a warning to any American writer who thinks they might be able to reproduce such dialogue--they would invariably get it wrong.

And on that subject, I have just two teeny weeny uninvited editorial comments: one, the only American who appears in the book (and then only very briefly) uses the word "polystyrene" for "styrofoam" and "stone" for the "pit" of a cherry. Why didn't the editor catch that? (Though I realize this is a small blip compared to all the errors in American speech that Deb at Blue Pencil found in Joanna Trollope's novel Girl from the South.) And there was one faulty food reference that I detected: after the main character's mother has gone back to work, he comes home to find "the pressure cooker sat on the stove, leaking stewing steak fumes. (Mum starts them off in the morning so they cook all day.)" That wouldn't be a pressure cooker she's using if it cooks all day--that would be a crock pot, slow cooker or whatever they call such a contraption in England. A pressure cooker is used to cook things faster than normal, the kind of pot you might use when you come home from work and are trying to get dinner on the table (the lid is sealed to the pot so when the liquid inside boils, it is trapped inside the pot. Having nowhere else to go, steam builds up pressure. This results in shorter cooking times.)

But these really are small complaints when compared to the wonderful story that takes you so many unexpected places.
Posted by Kate at 2:34 PM