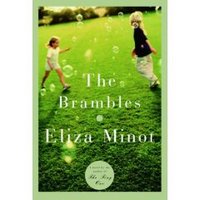 I just finished one of the best books I've read to describe the stage of parenting I happen to be at right now, with small people in the pre-school, beginning of school years stages.

Margaret, one of the main characters in Eliza Minot's novel The Brambles, is the mother of three young children and the sections of the book that are told from her perspective manage to weave in so many perfect descriptions that I found myself saying "Yes! Yes yes yes!" out loud when I was reading.

"Nothing manufactured in their brains yet, practically, to hold things in--"I don't like you, Momma!" --to keep it together, the life in them bursting out at the seams, in shambles. "My stupid stupid life!" It was both heartbreaking and hysterically funny to watch. And infuriating. And humiliating."

"But what, meanwhile, was happening to her? To Margaret? Not much. Simply, she is here. In the moment, as they say, behaving like a waitress, a handmaiden, a love slave, alternately ill-treated and then adored, worshipped by the little people. Humiliated and adored. Part goddess, part foot soldier, every day varying, yet every day the same."

I always joke with Brian that I should have a cocktail waitress costume to don to accommodate the number of (non-alcoholic) beverages that I'm demanded to serve each day. I don't remember ever being so thirsty all the damn time when I was a kid. I haven't read any other book that so captures the pleasures and the tedium of being a primary care giver to small kids.

The rest of the book is good too--the stuff from the youngest sister's perspective also hit home a lot. She's single and self-critical and wondering where to find meaning in her life. I can't say I related to the brother's sections because much of his struggle with identity related to his work and due to my strange lack of ambition, I've always been reluctant to define myself in terms of work. I think I define myself more by the people around me, whether they be work compatriots or friends or (now) the small people/tyrants.

All three of the siblings are confronting their identity questions within the framework of the overall story, in which their father is dying. This was handled so quietly. There wasn't a whiff of melodrama about the death, both leading up to it, the actual death scene and then the siblings' responses afterwards. I'm still not sure how she managed to make this scenario so interesting and yet so subtle and unflashy.
Posted by Kate at 10:00 AM

Hmmm: sounds great. Thanks for another recommendation (I loved Fallen, just finished it). Now I'm off to enjoy your scone recipe for the second week in a row.