I'm starting to feel a little strange about the books that I'm loving of late. I just finished this book: 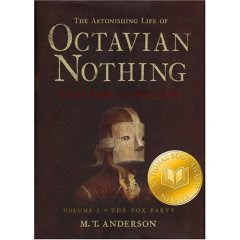 The Astonishing Life of Octavian Nothing, Traitor to the Nation, Vol. 1: The Pox Party
and it marks the third book in the space of a year that I think is absolutely fantastic and which is classified as Young Adult fiction. This book and the other two, The Book Thief and Fly by Night, are three of the most intelligent, risky, poignant and beautiful books I've read and I can't understand why they aren't considered "adult" literature. If the only reason is that the hero or heroine of each book has not reached the age of majority, well, that's a pretty pathetic reason. And if this is the case, I don't see why Jonathan Safran Foer's Extremely Loud and Incredibly Close would be an "adult" book since the main character of his novel is a 12 year old named Oscar; yet the New York Times Book review graced him with a review (and not in the segregated children's books issue). All three of these "Young Adult" books attack such huge and, dare I say, adult issues with such subtlety and complexity that it leaves me breathless.

I'm trying not to be cynical and put it all down to marketing. For all I know, it is smart to market a book as a YA work--maybe there is more of a market for good YA fiction than adult and the authors are raking it in rather than pinching their pennies. But if I wasn't a regular blog reader of such kid-lit blogs such as Bookshelves of Doom, A Fuse #8 Production and Big A, Little a, I probably would have missed these titles and that just makes me mad. Maybe these books are YA because their authors have written for a YA label in the past. But I still don't get it. I gave The Book Thief to my mother for Christmas (yeah, I know, nothing like a good fire bombing and tale of WWII miseries to cheer someone up at Christmas time...but I still think it is an exquisite and hopeful book despite the grimness of its subject.)

My latest read is set in the American Colonies shortly before the revolution. As a former 18th C lit geek (i.e. my first MA degree), the representation of the period, with its fondness for experimentation, political treatises and formal language was beautifully executed. But the story of a slave boy who is raised as an experiment in classical education and the abilities of Africans, told from (mostly) the boy's perspective, became much more than an exercise in 18th C arcana; it is a meditation on freedom, affection, liberty, and science, and how all of these "principles" are manipulated by society for personal and political gain. Really complex deep stuff that makes me want to pull out my Hume and Godwin and Wollstonecraft and re-read them--I can't say that another novel has had that effect on me in a looooong time.

My happiest revelation came at the end of the novel when two significant words of the title sank in: "Volume 1". I can't think of happier words for a besotted reader. Now I'll be anxiously watching for Volume 2.
Posted by Kate at 10:00 AM

Kate, thanks for the recommendation and the links to kid-lit blogs; I read a significant amount of mid-grade and YA myself (not to mention the picture and chapter books my kids read!), and I'm always threatening to read only that. An older book (for a younger audience) you might like is The Giver by Lois Lowry.
Now back to Book Thief! I started it, but haven't been compelled to pick it up again. Maybe I haven't read far enough yet?

Thanks Kate, for the review. I am 2 of 2 in the request pile at the AAPL. Can't wait.

These are great books to file away for future consumption. Already one of the best perks of having a kid is to discover great books for young people, and we haven't even gotten to chapter books yet.

I YA books! I tell all my grown-up friends about them, but they don't get it. And I tell myself I read them, you know, for my job, but in reality, I work in an elementary school library so many of the titles are unlikely to hit the shelves there.

OK, I meant so say I LOVE YA books. Sorry 'bout the typo.

OK I just found you from Big A, little a's link and now I have to start a reading list from your recommendations. I meant to read these this summer and I have been putting off making the list but now I know I need to start. Thanks!