In the department of snobby food (as opposed to the humble food), the highlight of our trip was the 3-hour long lunch at the one star restaurant Paris-Rome located next to the Italian border in Menton, France.

I've never eaten in a Michelin one star restaurant (if one star doesn't sound impressive consider that in the 2007 red guide, there were only 26 three star restaurants in all of France) and it was a very memorable meal. Unfortunately I lack a photo of one of my favorite tastes--and amuse bouche of a thin slice of smoked fish with a tiny scoop of arugula sorbet. I don't think I would have appreciated it in a portion larger than this wee taste because the intensity of the smoke, off set by the sweet bitterness of the sorbet would have been overwhelming in quantity. But as an amuse bouche? Well, my bouche was amused.

My first course was also a winner: 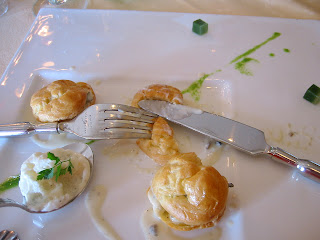 Profiteroles with snails in a gorgonzola cream sauce, with a scoop of roasted garlic mousse on the side and little parsley jelly cubes (or en Francais: Profiteroles d’escargot à la crème de gorgonzola , spoon d’ail doux & cube de persil). Ami also had a beautiful pureed chestnut soup which was poured over a little apple and blood sausage custard that was sitting in the bottom of the bowl. If blood sausage and snails sound vile to you, let me assure you that in this presentation they were not.

My entree was pretty, but not spectacular in the flavor department: 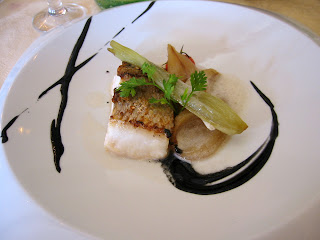 It contains a piece of sea bream served with roasted pears and fennel. What the black stuff on the plate is, I have no idea, but it was harmless in taste. The flavors of this dish were simply too subtle--pear, sea bream and fennel don't pack a punch even when grouped together. Instead I found myself coveting Shelia's main course:
Pièce de veau snackée, purée de datte, feuille d’aubergine & citron confit (that's veal with a date puree, thin sheets of eggplant and preserved lemon). Each flavor in her dish (which she so graciously shared) was distinct, vibrant and complementary.

For dessert I ordered the cheese plate: 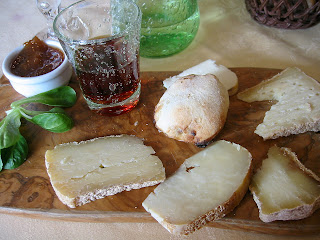 There were five cheeses ranging from fresh to dry, served with a little glass of dessert wine, some fig jam and breads. That little decorative puff in the middle is stuffed with a roasted fig. John got a beautifully constructed tarte tatin--I'll have to link to his Flickr photo when he gets around to posting it (check out his Cote d'Azure Travelogue for some other gorgeous photos from the trip)--but I have to say I wasn't that envious; the cheese/wine/fig combo was so pure in flavor that I was kind of relieved to give my palate a break. Unfortunately, there was a little serving mishap and the guy doused Ami in her wine and then seemed totally flustered, like he didn't know what to do. After a little while, he recovered from his embarrassment and brought out a replacement plate and glass for her and a spare napkin to cover the wet spot on the table, but it was a weird little serving gaff.

After dessert we ordered coffees (also to counteract having drunk a champagne/various citrus juice aperitif and wine with lunch) and with it came this nice little platter of petits fours. 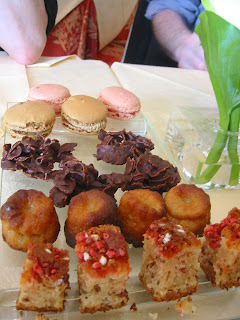 They were a little quirky (starting from the back of the photo)--the strawberry and mocha macarons were fine, but too sweet for us (though that isn't really a criticism--that's what French macaron's taste like). Then there were the chocolaty blobs that were indistinguishable from the melted chocolate chip and corn flake cookies that I made when I was a kid. Maybe this is one of those nostalgia sweets like when swanky restaurants have a chocolate chip cookies and milk plate? And they tasted like...chocolate covered cornflakes. Then there were the mini Cannelle; I'm quite familiar with them from my year in Bordeaux since they are a specialty of the region. I'm not sure why they chose to serve them in Provence, but what the hell, they tasted good with their custardy moist interior. And last were little squares of almond cake, nice but nothing memorable.

As it was the last day of the Menton Lemon Festival, the proprietor came around at the end of the meal and served us all a digestif of local lemon liqueur (which was served in a lovely little glass that I'm hoping John remembered to photograph...). It was a bit like limoncello, but a slightly mellower and less acidic (as are the Menton lemons when compared to a regular lemon, but I'll go into those more when I do the lemon re-cap).

Oooof. Three hours for lunch takes a lot out of you! We decided that visiting one of the perched villages and taking a hike would keep us from slipping into a coma, so we headed off to Sainte Agnes, the highest coastal village in Europe, with Ami-the-fearless-driver negotiating the 12 kilometres of hairpin turns.

Unfortunately, as we ascended the clouds lowered: 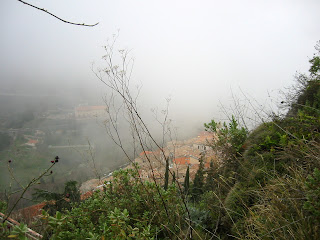 And by the time we hiked to the top of the medieval castle, this was the view: 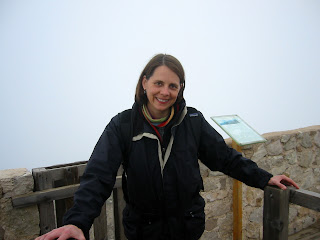 You can't tell, but Ami is standing in front of a beautiful panorama of the coast looking toward Monaco and in front of her is a view of the Alps...(to see what we were supposed to be seeing, you can visit the village web site for a photo tour).

But the pleasures of our lunch were still tangible so no one felt even a little grumpy.
Posted by Kate at 9:45 AM