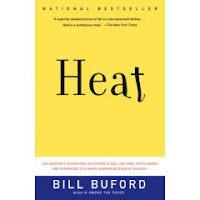 The reason I hadn't read the wildly entertaining book, Heat, is that I thought the author was someone else. Heat is by Bill Buford. I thought it was by Bill Bryson.

Bill Bryson is an author of many books, all of which I think have entertaining features about them, but would be better as magazine articles. The first chapter or two can be fun to read, but then his voice starts to grate on me and it feels cutesy and over done. This is not a widely held opinion of the author's books--plenty of people like them from start to finish. I think they usually have one or two good moments and the rest is repetitive.

So when people told me I had to read Heat, I told them that I thought the author became tiresome after about 50 pages and I didn't have the stomach for it. My sincere apologies go out to Bill Buford whose book I am about half-way through and am enjoying as much as a novel (which is high praise from me). I have laughed and learned and tried hard to keep track of a vivid cast of characters.

The book is also making me very hungry, so it is a good thing that at last night's auction, I was the winning bidder on a basket of delicacies from Morgan and York. This morning I enjoyed my morning coffee with some toasted baguette slices topped with a poached egg, a little sea salt and black pepper, and drizzled with the Montalbano olive oil that I acquired last night. I think I have a new favorite breakfast.

Right now, I'm at the point in Heat where Buford is learning about pasta and I'm pretty sure that later this weekend I'll be making some fresh pasta to drizzle with this golden elixir.
Posted by Kate at 12:36 PM

I agree with you on Bill Bryson. I thought the first book I read by him was pretty good (A Walk in the Woods), but I lost all respect after I read a few more and realized they were all the same thing, over and over.

I stumbled on your site, looking for a recipe for Zingerman's Magic Brownies.

On my blogsite, I have this great widget from Library Thing that shows what's on my bedside table. I change it every time I go to the library.

It might not interest you, but if you want to look at it, it's at http://jansdailydish.blogspot.com

I really enjoyed your site - it's well put together. ~ jan