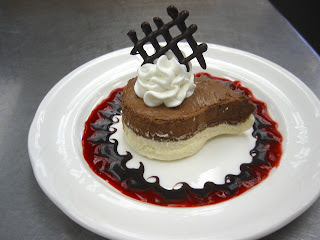 It's actually a teardrop shaped dark and white chocolate mousse, with raspberry and chocolate sauces, whipped cream and a chocolate lattice. And all but the white chocolate mousse was pretty fun to make. We screwed up the first batch of mousse by overheating the white chocolate. It melts at such a low temperature (since it is cocoa butter with no cocoa solids) that you can't melt it over a double boiler, not even one on super low heat. It'll seize up and become crumbly and nasty if you don't melt it over hot tap water. And it takes forever--I think I built some new musculature in my forearm from stirring the stuff over the warm water bath for so long.

It tasted pretty good, though I'd have preferred all dark chocolate mousse. I'm not much of a fan of white chocolate--too damn sweet for me--which is too bad because the other dessert we made today also featured white chocolate: 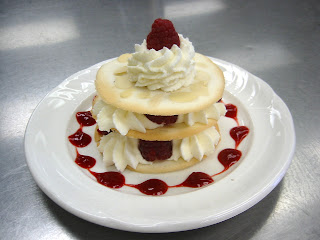 That's three almond tuilles with white chocolate whipped cream, fresh raspberries and raspberry sauce. It tasted pretty good and since the white chocolate was melted with some cream it wasn't such a pain in the ass to make. Personally, I would have preferred a higher fresh raspberry to the rest-of-the-sweet-stuff ratio. So I made a little one for myself: 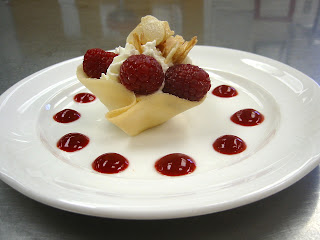 I molded the tuille on an upside down mini muffin tin to make the cup, then put a rosette of the white chocolate whipped cream inside, loaded on the raspberries and topped it with some purloined candied almonds that another group made for a cake.

In case you think I am living in La La Pastry Land, I also present to you a dose of reality: 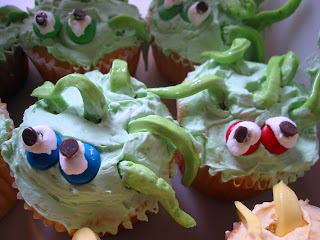 These are the cupcakes the kids and I made for Ian's class Halloween Party. I made vanilla cupcakes and French buttercream that got tinted lurid shades of green, yellow, purple and pink to match the Laffy Taffy tentacles. Yes, you read that right--I paired French buttercream with sour apple, banana, grape and strawberry Laffy Taffy. I'm sure that is considered a crime in some places. My cupcakes turned out messier than the great ones I saw on Flickr--I had a hell of a time getting the marshmallows to stick to the M and Ms for the eyeballs. Of course, some of the kids in the class ate the Laffy Taffy and the M and Ms and then threw away the vanilla cake and French butter cream. But Ian actually ate the whole thing, which may not sound impressive (cake and candy, geez kid) but for him, the picky eater extraordinaire, is quite an achievement.
Posted by Kate at 3:33 PM

I love the cupcakes and am continually impressed by your pastry skills! That class sounds like so much fun.

I discovered this very nice blog while looking for a lassi recipe; which was posted way back in 2005!

To back to the lassi business, where you recommend using buttermilk instead of yoghurt to make mango lassi: just thought I would let you know that lassi in fact IS buttermilk! Thats what the word means.

Plain lassi in our house is made(really hard work before the electric stuff came by), by putting day-old leftover home-made yogurt, plus the cream that comes from boiling fresh -non-pasteurised milk , and you churn away for half an hour. Then you get butter forming into clumps in the liquid, which you fish out, all that you can, and what is left is lassi.

A footnote is that when you have accumulated enough of this butter (perhaps a week or so), you heat it to the point where you get the separation of milk solids and fat = i.e. ghee (the real stuff), which gives that nice taste to many Indian dishes!

nice mousse next time try melting the white chocolate in 10 second bursts through the microwave i.e in on full power for 10secs then out then back in for 10 secs carry on until the chocolate starts to melt, you should end up with it perfectly melted believe me im a chef of 27 years and it works every time for me.