Sometimes, for no good reason, a headache will just take me down to funky town. My funky town looks like this: I can't stand odors, can't take light, don't like food, and worst of all, can't read without it hurting. The strange thing about this headache was that it wasn't triggered by anything--no stress from yelling at kids, no excess of alcohol, no insomnia to blame, just a wicked headache that resisted 1. ibuprofen 2. caffeine 3. Tylenol 4. a blissfully quiet house with kids over Granny's 5. fresh air obtained via hour long walk.

Finally I just had to lie down and give in to the damn thing. And after about two hours of that (go ahead and hate me for having the opportunity to lie down for two solid hours) headache receded enough to let me read. I have to say, the worst thing about these headaches is how damn boring they are so once I could read again, I felt a little more normal (though food and noise still don't seem like a good idea).

The hardest thing about this trip to funky town was I was in the middle of a really good book, so the borning-ness of lying there for two hours was intensified. 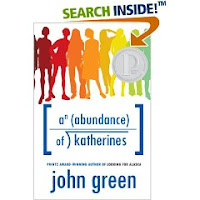 But once tracking words across the page didn't make me feel like a firecracker was going off behind my eyes, I was able to finish the book, An Abundance of Katherines. This is a charming YA novel with really terrific dialog between the two main characters, Colin, a former child prodigy, and his best (only) friend, Hassan. At times their banter reminded me of the scenes in the movie Knocked Up which so perfectly captured the grossness and affection of immature males--lots of references to their balls, weird nick names (including one of my favorites--sitzpinkler--a German insult for a man who sits to pee), but underneath it all, genuine caring and friendship.

I was amused by Colin's obsession with creating a mathematical formula to describe all of his past (and, he thinks, future) romantic fiascoes. And I like a good road-trip buddy story. But what really got me was the way Colin and Hassan's friendship was expressed and how they blunder around in the undefined post high school period trying to figure out who they are and what they should, could and would do with their lives. There's a little bit of preachyness at the end of the book about personal responsibility and taking care of your fellow man, but when I consider the intended audience (i.e. not me) I think it is a mighty fine idea to plant in the heads of young readers.
Posted by Kate at 4:51 PM

Just to say that you might like to know that the author of that book has spent the entire year swapping video blogs with his brother here: http://www.brotherhood2.com/ and in doing so has created an entire community out of like-minded young folk who are decent and like to read, which I find very encouraging.

When we are together just hanging out, my gal friends always comment about the naming of the male organ. I just love your references here. Keep up the good work!

What you describe are classic migraine symptoms--read Oliver Sacks's book on migraine, and you will find yourself.

Ditto what anonymous said re: migraines. Until I switched careers, I got them all the time. I took Imitrex (sp?) and it really helped. Migraines are just awful :( Feel better!