I have had some modest successes in the kitchen of late--none worth their own post in splendidferousness, but fine for a group post.

First off the one without a photo:
Last night the kids got a big kick out of bucatini pasta. The loooong tubes were great for pretending to be anteaters, though not so hot when it came to table manners. And it is an excellent shape when paired with the best Bolognese sauce I have ever made. I made the original batch a couple of weeks ago and thankfully there was enough left to freeze so we could enjoy it on an otherwise rushed weeknight. It is destined to be a regular recipe around here.

Another quick and pretty tasty weeknight dinner was pork tenderloin medallions in ginger pear sauce. This would probably look prettier if you followed the original recipe and flattened boneless pork chops to big medallions rather than the sort of stew-like effect of the circles of tenderloin, but it tasted damn good, especially when served with farm bread and a biting arugula and walnut salad. 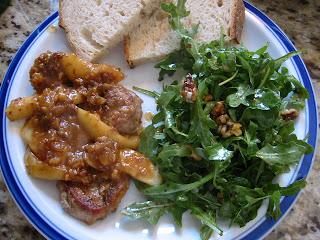 I modified the recipe slightly (at the end of this post) and it really was done in about 15 minutes total time.

And last weekend we had the party for the girl whose birthday fell over the mid-winter break. She requested a dinosaur party and thank god for The Baker's Nook in Saline or I would have been struggling with fashioning a dinosaur scene from buttercream. I was able to pick up molded sugar dinosaurs and dinosaur sprinkles which was much more pleasant than wrestling with the pastry bag and icing tips. 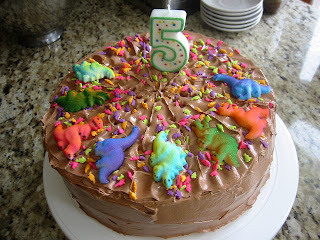 I made my standard Mexican chocolate cake though with no cinnamon and less vanilla than the original recipe. It has got to be the easiest, most fool-proof cake ever and turns out really moist and not too heavy. This time, I tried a meringue based chocolate buttercream which the grown ups seemed to like even more than the yolk based French buttercream I've made. It has a slightly lighter texture due to the Italian meringue into which the butter and chocolate get beaten. And it has a lot of chocolate--12 oz of bittersweet--so it really packs a flavor punch. The only hitch with the recipe I used is that it made a hell of a lot: 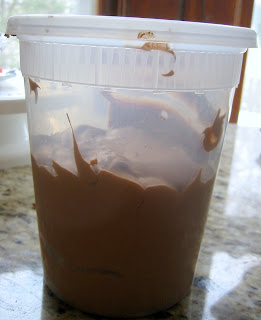 I have about a pint and a half left over and we're all a little caked out here. Other than sitting down with a spoon and a movie and descending to a new low of gluttony, I don't really know what to do with the stuff. Anyone in the neighborhood making cupcakes this week and want some buttercream?

Use a meat mallet or the bottom of a heavy frying pan to flatten the pork until it is about 1/4 in thick. Season pork with dried sage, salt and pepper. Coat pork with flour; shake off excess.

Heat oil in heavy large skillet over medium heat. Add pork to skillet and sauté until brown, about 3 minutes per side. Transfer to platter.

Add pears and sauté over medium heat 2 minutes. Stir in wine, honey, ginger and salt scraping up any browned bits. Add a little water if you need it to deglaze the pan properly. Increase heat to high and boil until pears are tender and syrup is thick, about 5 minutes. Return pork and any accumulated juices to skillet. Simmer just until cooked through, about 1 minute. Season to taste with salt and pepper. Arrange pork on plates. Spoon sauce over and serve.

I froze some cream cheese frosting and it was fine...maybe you can freeze it.

I've looked all over for Bucatini pasta locally and can't find it. I've tried Hiller's, Plum and Whole Foods. Do you have a local source?