Bad karma be damned. Sometimes I'm just feeling crotchety and have to have a little rant. Most of the time, I try to limit my reviews to positive or constructively critical remarks. But there are a couple of cookbooks that I have picked up lately that punched my buttons and I feel compelled to rant. 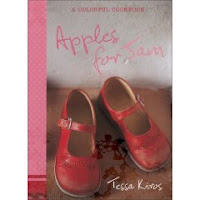 Apples for Jam by Tessa Kiros
At first I thought this was a kid's cookbook, in which case the organizing principle--recipes grouped by color--might make sense. I know plenty of kids who decide what they will and won't eat based on color. Yes to red, no to orange, yes to brown, GOOD-GOD NO to green. But this book is intended for adults. And to use the book you have to read the mind of the author in order to find a recipe--is "Chicken Sauteed with cheese and milk" in the "Yellow" section, the "Gold" section, the "White" section or the "Monochrome" section? Apparently Pork Schnitzels are "Monochrome," Pan Fried Sole is "Gold", Pizza with Stracchino Cheese is "White" and Grilled Fish Skewers are "Yellow". If ever there was a book that was designed to confuse someone who actually wants to use it as a cookbook, this is it. I started leafing through the book guessing where a particular recipe would be listed--would Lasagne be in the "stripes" section or in "red"? Sauteed Broccoli with Tomato--"red" or "green"?

I have no idea whether the recipes are any good because a) I got so annoyed by the organization and b) I was so nauseated by the many self-congratulatory moments. Under the aforementioned Sauteed Broccoli with Tomato is this blather: "We blew away our fallen eyelashes and the ladybugs that landed on us, together with our wishes, to the nearest star." Ick. Does anyone need an excess of whimsy along with a (useless) "recipe" for Eggs with Bread and Butter? To call this book smug and masturbatory is a bit of an understatement. The author is celebrating her apparently perfect life with her two daughters in Tuscany which would be fine if this was her family scrapbook. But people are going to buy this thing?

But hey, at least the photos are good. Which leads me to my next rant: 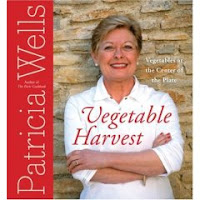 Yes, that Patricia Wells, whose name is uttered with veneration. The premise of this book really appeals to me: its subtitle is "Vegetables at the center of the plate." I'm one of those eaters that prefers the side dish to the main course--in fact, when we go to BBQ joints, I usually skip the meat entirely and order a plate of sides. I'd rather have collards, braised green beans, coleslaw and some barbecue beans than a slab of ribs.

Now my rant about this book is a little more tempered--there are some recipes in here that I'll try. But I have two big disappointments: the first is the photos. They are mediocre at best. There are no photos of actual recipes, just atmospheric shots of vegetables being sold at French markets. But worse, the photos are really pretty bad. They bugged me so much that I sought out the photographer--who did they pay to provide the photos for a big-name author? Ah. Well. That explains it. Photographs copyright Patricia Wells.

It may be uncharitable of me, but I imagine the scenario thus: Wells went down to the market one Saturday morning, snapped some pics with a cheap digital camera and convinced her publisher there was no need to hire a professional photographer. Quite a few of the photos are a little out of focus, others are poorly cropped, and still others are a bit inaccurate when compared to the recipes next to which they have been placed--do you really want a photo of fresh fennel next to a recipe that calls for two teaspoons fennel seeds? And does a recipe for quail with fennel seeds really count as putting vegetables at the center of the plate? (My kids would love it if I counted sesame seeds as a vegetable!)

The book could have been made much more inexpensive without these gratuitous, mediocre and not even useful full-color plates.

The other objection I have is that many of the recipes feel like filler. In the salad section, out of 17 recipes, 7 of them have as a key ingredient the same vinaigrette recipe. I get it. She loves her Creamy Lemon Chive vinaigrette recipe. But couldn't she have put together a page of vegetable combination ideas and said they should all be drizzled with the vinaigrette instead of separating them out into distinct recipes? Oh but wait, that would mean that the Salad section of the book would only be about half as long....

Ok, I admit it, I'm also pissed at myself. Usually I try out a cookbook before I purchase it by checking it out of the library. And this time I didn't. I bought it on-line without ever cracking the cover and I feel a little duped.

To be fair, some of the recipes in the book sound decent--the Saffron, Pear and Prune Compote for Cheese sounds like a nice autumn recipe. Curried Beet Soup sounds good too. Maybe now that my excessive vitriol has been expunged from my system, I can stand to open the book to actually try some of these out. Let's see if that Lemon Chive Vinaigrette is as outstanding as Wells implies.
Posted by Kate at 6:55 AM

I, too, know the disappointment of a bad cookbook. "Smug and masturbatory"? Perfect way to describe so much of our culture. I blame Martha Stewart for its rise, but I have subscribed to her magazine non-stop for 14 years. At least the photography is beautiful.