Recently Fiona has become much more critical of the stuffed animal dragons she owns. I was told that a purple dragon (which she asked Santa for the day before Christmas thus sending Brian on a mad dash all over the place trying to find one--mental note, get the kids to visit Santa way before Christmas Eve this coming year) had to be sent back to Santa. This wasn't right after she received it, mind you; she had been insanely in love with Darby as soon as she saw him. This occurred a good two months later. One morning she she came downstairs sobbing because Darby didn't have horns.

I tried guilt tripping the kid into thinking she'd hurt Santa's feelings if she sent it back. No deal. She was sobbing so hard that it was getting hard to understand her, but I think the gist of what she was saying was that Santa's elves could fix him and at least then he'd be happy because he'd have what every dragon needs.

Sigh. The kid would rather have the toy be happy and "complete" than keep it herself and have it living a life unfulfilled. Once I realized she wasn't being a completely selfish little brat, I figured I'd have to give a little minor plastic surgery a try.

I dug through my fabric stash and found some brown wool felt. I got Fiona to draw what Darby's horns were supposed to look like, took her pattern, cut out the felt and sewed the horns on. They aren't perfect, but they made her happy, Darby didn't have to be shipped back to Santa and it wasn't that much work.

But now, four months after receiving a beautiful Chinese Dragon for her birthday, King Kornivised Keenivore (as he is known) was presented to me for his own much more extensive surgical enhancements. No tears this time, which was a relief, but maybe an excess of confidence in the surgeon's talents. King has horns, but no wings, no nostrils (which I was told makes breathing fire very challenging) and no triangle on the tip of his tail. 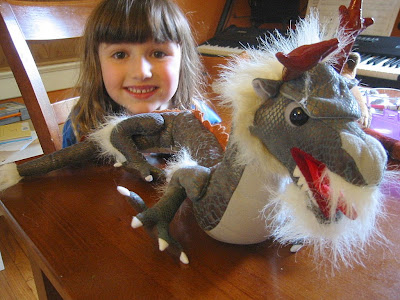 He looks pretty good to me (ok, the lack of nostrils is a little weird when you start to think about it...) but look at that eager little face waiting for Mama-the-surgeon to work her magic.

Wings are a lot trickier than horns. We had to use Google images to look at all the dragon wing options and I managed to steer her toward some I thought I might be able to reproduce. I dug out some more brown wool felt--two colors this time so that the underside of the wings would be a different color, and to give the wings a little heft so they wouldn't be flaccid (horrors! flaccid wings!) 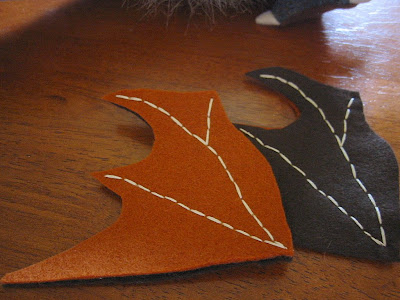 I used some embroidery thread to add some (primitive) veins. 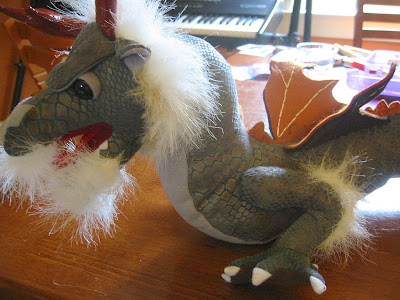 Then I sewed them on his back. They looked pretty good for my first wingoplasty.

Riding on that success we added the triangle to the tail. Fiona still hasn't come up with a good explanation of what purpose the triangle serves. Rudder, perhaps? 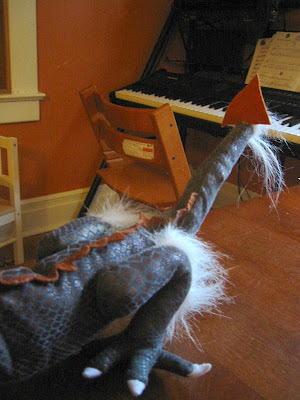 Then I got out more embroidery thread and added some black flaring nostrils. Luckily the photo is blurry because these were a lot harder than they looked. I still can't quite figure out why--I mean, embroidering an oval, how hard can it be? But I had to rip out a few really lumpy and lopsided nostrils before we got a couple of acceptable nostrils (though they are a little petite for a truly ferocious dragon). 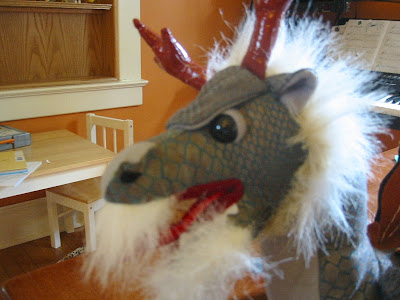 Life is much better with nostrils. At least, that's what King told me.

So what comes next? Am I going to be asked to graft talons on toes? She did suggest I sew scales all over a furry dragon and I just pretended I didn't hear her. But if she wears me down and pulls another of those heartbreaking sobbing fits...well, maybe dragon skin grafts are in my future.
Posted by Kate at 7:09 PM

Maybe baby dragons are furry? Although after seeing your masterwork with the wings, I'm pretty sure you could come up with something for the scales. Next on Pimp my Dragon!

In any case, I agree that one of the best (and maybe worst) things about occasionally sewing something for your kids is that they think you can make anything. Elliot might be growing out of that, which makes me wish I had tried harder to make him the Gruffalo costume he wanted for Halloween a few years ago.

That's awesome! I love that you are Pimping her Dragons (to coin Anamaria's term)!