I'm giving a big old brain-burp now after a week of binge reading my way through two helpings of thirds in two series of books by two of my favorite authors. Follow that? 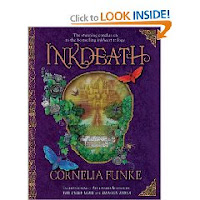 This was one of the most fun books I've read this year; it isn't stand alone, but it was a rollicking good read as the culmination of the (significant) amount of time I've spent in Inkworld. Most of all it fulfilled my appetite for the characters and I think I'm ready to let them go, not because I'm bored with them, but because I like where they are and don't feel a perpetual need to know what happens next. Funke did leave herself an opening for another book, but not in a cliff-hanger way: the meddlesome Orpheus disappears into the northern forest, but he isn't dead and could make a reappearance.

I've read some criticism that the character Meggie is more passive in this book, which is true, but I always thought of Mo as the main character of the series, not Meggie. I liked how his wife, Resa, finally got to play a significant role in the adventure. Also there were plenty of meta fiction references to how adventure and fantasy books are traditionally written (such as when Meggie comments on how Finoglio never lets his women characters do anything in his books) which seemed to be playing with and winking at narrative convention. 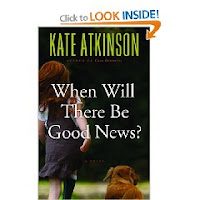 Then this past weekend I gobbled up When Will There Be Good News? by Kate Atkinson*. This is the third book that has featured Jackson Brodie, a not-always-competent private investigator. While there are crimes committed and investigations mounted, these books are not traditional detective fiction. When the crimes are solved, it doesn't feel like the culmination of the novel; rather it is the characters and their growth and development, their struggles to overcome their pasts and attempts to live relatively moral lives in the present which capture our attention most fully.

And despite loads of traumas and injuries endured by all the main characters, the humor is dark and biting and feels so right. You can feel the author's pleasure when she makes some of the jokes (the Yorkshire town of Hawes is repeatedly misheard as "whores"--soften your "rs" and read both words with your best British accent) and there are loads of little digs buried in the text: sing-song nursery rhymes and bits of Virgil coexist and twist their way into the plot. I think I could easily read the book again just to decipher all the hidden bits that are embeded in the text.

But I'll put that off for the moment. After two helpings of thirds, I'm a wee bit full.

*If you'd like to read the first few pages of the book to get a feel for the tone and see if it is to your taste, the NYTimes kindly published an excerpt here.
Posted by Kate at 8:32 AM