...for the great mustard shortage. 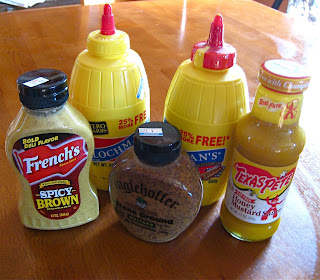 Impending global mustard shortages are the only explanation that I've come up with for the bounty of mustards I found when I cleaned out the cupboard. Pictured above are the members of the un-opened stash. Not in the photograph are the 5 bottles/jars that are already in use and housed in the fridge.

Cleaning out the cupboard was an interesting exercise in self-analysis. I'm still trying to understand the reason why I purchased and stashed away two large jars of capers, 3 cans of green chiles (I don't know what I'd use canned chiles for, much less why I have three cans of them) and enough canned chickpeas to keep us in copious quantities of hummus for at least a month. What particular anxiety disorder can be blamed for compulsively stocking up on weird stuff? It would be one thing if it meant we just have too much food lying about, but in my inventory I also discovered big gaping holes for foods that I consider staples. I was sure there would be two or three cans of Muir Glenn diced tomatoes since I love them and use them all the time. There were none. Nor any tomato sauce. Nor a spare jar of peanut butter. But hey, I can bury any dish in an inch of mustard...

Thankfully the freezer purge was not so disturbing. There was a bag of ancient frozen strawberries and one wrapped piece of mystery meat that were discarded but otherwise, most of the effort was in organizing and inventorying what was in there but hard to find.

I made two check lists, one for the cupboard and one for the freezer items, that I'm going to try and see if I can use to stay on top of what is in the house. 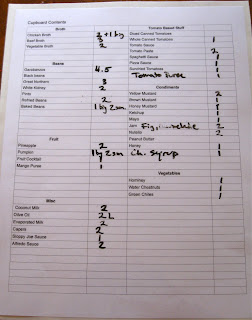 I put down the stuff we often have and then made a column to list how much of it there is. Then I laminated them so I can use a wipe-off pen to log in quantities. And there are blank lines where non-regular items can be listed. Of course, I haven't been grocery shopping since making the lists so the test will be whether I log in the new stuff or just ignore the lists and render them useless.
Posted by Kate at 8:25 AM

I had a similar odd stash of soy sauce (3 bottles, not counting the open one already in use) when I cleaned out my cupboards to move last winter. I was hoping that the local food bank knew of families that enjoyed Chinese! I enjoy your blog...makes me laugh!
Tonya

I LOVE the idea of this and will be curious to hear how this works for you...we just bought a freezer, so I should implement this idea now, before it is too late! :)

I have issues with olives...last time I cleaned the cupboard I found 6 jars of 4 kinds...

I know you aren't practicing, but this is a Jew thing. I had mentioned my same compulsion to squirrel things away to a rabbi once. I was kinda bothered by it, and I'm not even sure why I mentioned it except that I worry about myself some times. He said it was a total Jew thing and not to worry. So I continue to stockpile and squirrel and figure that great grand parents and grandpa are in Heaven, delighted with me.