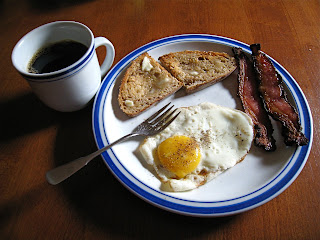 Sometimes you just need to take a little break from the oatmeal/granola routine.

I went to my first Zingerman's Mail Order Friday warehouse sale yesterday and bought two packs of the Arkansas peppered bacon ($7 each, normally $16). Man is it good. I don't eat bacon that often (for which my heart thanks me) but when I do, I like to make sure it is the good stuff. Occasionally I get it from the Farmer's Market or pick up the Niman Ranch bacon that Trader Joe's usually has. But this stuff is even better. It probably won't be as appealing to my kids--more for me!--because it is heavily peppered, which I love. But we'll see. They aren't awake yet, despite the bacon fumes wafting through the house.

At the sale, I also bought a pound of the Ig Vella's Dry Jack cheese, something I remember from being a kid in the Bay Area ($10 instead of $24), a half-pound of the 1-year cheddar ($4 instead of $7) and two packs of the Vampire Gummies for my kids ($3 instead of $5). The girl critter happens to be on a Vampire kick (she disguised two of her stuffed Pokemon with fangs and wings and brought them along to the sale) so I couldn't resist. And hell, if I get bacon, they can have some candy, though I did have to draw the line at the Italian Chocolate Cigar that she wanted and that was still $12 (normally $20).

Click here to see a list of what was on offer yesterday. It changes weekly (I signed up for their weekly e-mail while I was there) and I can see a new Friday tradition beginning. The stuff at the sale still is expensive when it comes to my regular food budget, but considering the quality and the discount and the treat factor, it seems like a pretty good deal. Not to mention all the samples the girl critter managed to stuff into her squirrel-like cheeks...
Posted by Kate at 6:00 AM

I keep forgetting to go to that. If you ever want to go in the PM (after 4 or so), please let me know!

Wow. I wish I had known about that when I lived in Ann Arbor! Although, I would have been there every Friday... :) I got my fix by going on the bakehouse/creamery tours as much as possible!

I think it is a pretty new thing--maybe only a couple of weeks old? I need to get myself on a creamery tour; haven't done that yet.

I have gone to every Friday warehouse sale since it started (mid-March) except for two. My office is about a five-minute drive away from the warehouse, so it's extra-convenient to hop in the car and go over there. I love the Friday sale. And that bacon was absolutely amazing.