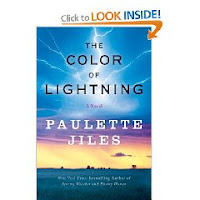 I recently finished a book that does something quite remarkable: it presents all the sides of a conflict so evenly that as soon as you have sympathized and supported one side of the conflict, the author makes you see and understand it from the polar opposite perspective.

Paulette Jiles' The Color of Lightning begins with a scene of remarkable violence: a Comanche and Kiowa raid on a northern Texas frontier settlement, the murder of some, the torture of others, the brutal rape of two of the women and their capture along with four of their surviving children. If you told me that 100 pages later I would feel heartbroken when one of the captive children who has been adopted by the tribe has to leave the Kiowa to return to his family I'd have thought you were off your rocker. But that's what happened.

Jiles has written an historical novel that does not flinch at the complexities of history: she shows the flaws and the virtues of three disparate cultures that collided with tragic results. There is the story of Britt Johnson,* a freed slave, and his wife and children who are negotiating the freedom of the Texas frontier while tiptoeing around some very angry white people who are pissed about losing the Civil War. There is the story of Samuel Hammond, a Quaker from Philadelphia, who is sent as an Indian Agent to some of the most war-like and violent tribes, to preach peace and convert them to Christianity and an agrarian lifestyle (unsuccessfully in both cases). And there is the story of the Comanche and Kiowa whose traditions and way of life are disappearing and who react with both extreme violence toward the settlers, and extreme tenderness toward the captive children they adopt. Most vivid is the portrait of a particular warrior, Tissoyo, whose love of gossip and befriending of Britt make him a complicated bridge between two of the worlds.

Using Samuel and his friend the illustrator James Deaver as her mouthpiece, whose biblical morals (in the case of the former), and liberal cultural appreciation (in the case of the latter), make them echo the contemporary questions that were popping into my head as I read, the author probes the clash of the cultures: at one point Deaver remarks to Samuel that "Americans are uncomfortable with tragedy." Near the end Samuel, who finally sees the futility of his position, violates his principals of non-violence, and says to Deaver, "And here [tragedy] is. We are regarding it. Like an audience." Shortly after this statement, he leaves the territory and the role he has played forever. In a way, he is less like a member of an audience, and more like a character who walked off the stage when it is clear that things will turn out very badly (something that I've always secretly hoped Edgar might do in King Lear...)

I thought that one of the most memorable and heartbreaking moments in the book (and there are many) was watching Jube, Britt's son who was captured and adopted by the Kiowa, decide to return to his family. His loyalty to his parents, particularly seeing the sacrifices his mother made to keep him and his sister Cherry alive, motivate his actions. But he is ripped up inside because on an individual level, staying with the Kiowa would have been much better for him as a black man. For his own sake I wished he could live in a place where he could grow into an equal member of the community. His longing for the freedom and the self-esteem that he left behind is a difficult compromise to watch.

And on the other side, I loved Elizabeth Fitzgerald, a white captive woman who dubs one of the wives of the man who captured her "the Dismal Bitch." She is so terrifically foul tempered (with good reason since she is a slave and treated brutally, not adopted like the young captives) that she eventually causes the Dismal Bitch to commit suicide. After this, the Comanche are convinced that she is a witch and eventually when Brit arrives to ransom the captives, they pay him to take her back. Moments of levity like this help keep the book from sinking into a morass of historical misery.

The book kept me emotionally charged by my feelings for all the different characters and their cultures. But I would be remiss if I didn't mention all the physical beauty in the book: the way the mountains rise out of the plains, the horses that gallop in giant wild herds, the quick on-set storms rushing towards a settlement, the view of a buffalo calf tottering near its mother. The author's gorgeous prose makes this a tragedy that is drenched in beauty. Jiles facility with language makes the landscape sounds so exquisite that I understood why people loved it so fiercely and fought so hard to claim it for their people.

________
*I only discovered in the author's end-note that Britt Johnson was a real person and many of the events that she depicted were based on historical records.
Posted by Kate at 2:58 PM

I always look at Jiles' books and think I should read one, but I never have. Maybe I'll finally get to read this one.