Based on how much I bitch about my kids' lousy eating habits, what am I doing promoting anything that appeals to them? But the one area in which they don't drive me totally nuts is Middle Eastern food. We may have crap Thai and mediocre Vietnamese around here but the Lebanese food can not be beat (well, except in Lebanon...). When the boy critter was just a babe he sucked hummus (aka white velvet) off his pudgy little fist though, before you ask, sadly he no longer eats hummus...but he and his sister do eat copious quantities of lamb!

Since I can't afford to take them out for kofta and shawarma every week, I had to come up with a home version. Into the base of ground lamb goes some fine chopped onion, pine nuts, allspice and cinnamon, parsley, salt and pepper. 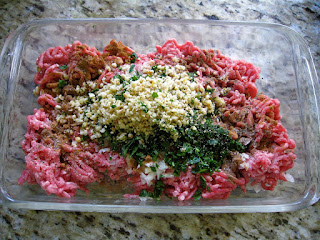 I make Brian squish it all together and shape it into patties. It's nice to delegate the icky part of the recipe.

Then I pop them in a non-stick or cast iron pan and cook away: 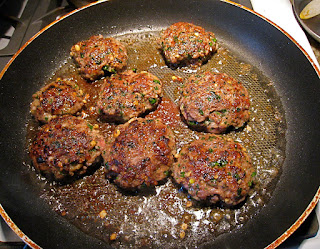 There's a lot of fat in most ground lamb*, but a lot of it also stays in the pan, not the patty.
Then serve it with your favorite Middle Eastern sides and accompaniments: 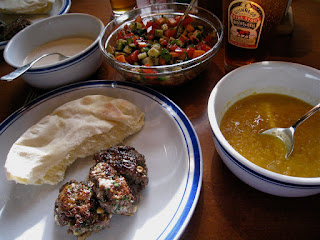 I couldn't stand the thought of going to the store (sometimes I suffer from severe retail aversion) and it was a good thing too because tonight I discovered that making your own pita is really easy and really good. I followed this recipe from the blog, Brown Eyed Baker, though as a lazy person, I let my Kitchen Aid do all the kneading. Since we were heading down to the FestiFools parade and this outing would interrupt the regular timing for the second rising, after I weighed and shaped the individual dough balls, I set them on a parchment covered baking sheet and loosely covered them with plastic wrap before sticking them in the fridge. When we got back, they rolled out nicely and puffed up when I baked them on the pizza stone. And the sensation of popping a lamb patty into a fresh, warm pita? Fantastic!

Fiona literally started jumping around the house with excitement when I told her I'd be making lamb patties for dinner tonight, and for a kid who is indifferent-to-hostile to most dinner foods, that is something to see.

In a bowl, combine all ingredients and mix well until evenly combined.

Take heaping tablespoons of the meat mixture and roll into balls, then flatten into patties (12 total, 4 per person). Or divide up into 8 larger balls (like Brian did tonight) and give out 2 per person.

Pan fry in a non-stick or seasoned cast iron skillet until browned on both sides and no longer pink in the middle.

To serve, stuff patties in a pita with tomato, cucumbers, lettuce and tahini lemon sauce or hummus.
_______
* The leanest ground lamb I've found has come from the folks who sell it frozen at the Ann Arbor Farmer's Market. They aren't there all weeks, but when they are I try to pick some up.
Posted by Kate at 1:04 PM

I have plans for turkey burgers this week, and I think I'll use your lamb recipe with the ground turkey thighs in the frig.