I recently returned from one of the most beautiful places on earth: 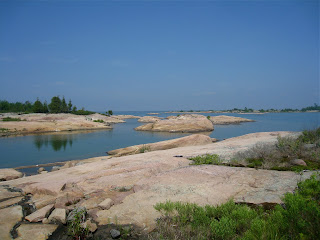 Ah, Georgian Bay, how I love you. (That's Little McCoy Island pictured above. We canoed out and camped on nearby Big McCoy Island last week.)

Now that we're home I'm trying to prolong that vacation feeling and a nice cold drink seemed like the most efficient way to do so. I also may just be attempting to avoid the reality of the coming week in which my better half and I attempt to put up all the trim in the addition that we have learned (quite happily) to live without due to severe construction-fatigue. Luckily, alcohol is a multi-purpose sort of thing! While cracking a cold beer is always pleasant, I've rediscovered an old summer drink favorite: 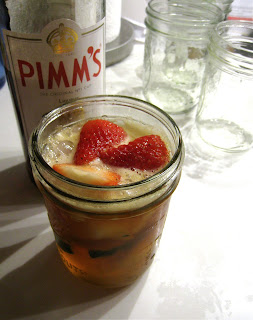 It seems particularly appropriate to write about it today since, according to Wikipedia, it is one of the staple drinks at Wimbledon which just had the first British male singles winner in 77 years--so I raise a glass (well, a mason jar) to you Andy Murray!

There are lots of different recipes out there for a Pimm's Cup so I'm trying out a few of them (research, you know...). All include Pimm's No. 1 (duh), cucumber, ice and some sort of fizz. But after that you find plenty of other stuff thrown in: lemon, orange, strawberries, extra gin, and mint are some of the players. I'm game to try them all except for the mint. I'm saving my mint for mojitos and mint sounds like it would compete with the juniper in gin (even if you don't use extra gin, Pimm's No. 1 is gin-based. The other numbers have different bases like Pimm's No. 3 is brandy-based and No. 6 is vodka-based but most of the other numbers are hard to come by or have been phased out.) I think I might be too much of a lightweight to substitute champagne for the soda mixer but if anyone out there tries it (and can remember after trying it...) let me know what kind of a taste sensation it provides!

So far, I like my variation #1 best:
cucumber, orange slice, Pimm's and ginger ale.

#2 was pretty tasty too:
cucumber, lemon slice, sliced strawberry, Pimm's and 7-Up.

Next to be tried will be the #1 with extra gin and maybe extra cucumber.
UPDATE: extra gin is good, particularly if you don't have to go anywhere anytime soon! Adding double lemon and double cucumber makes it almost like a salad so you can pretend it is healthy, too.

The basic method is the same:
Take a mason jar (or a high-ball glass for those of you who have appropriate bar-ware) and drop a thick slice of cucumber in the bottom. Add a thick slice of orange or lemon. Then muddle the hell out of them (I use the handle end of a wooden spoon and find it quite therapeutic). Then add lots of ice, pour over 2 oz of Pimm's (you can add another 1/2 oz of gin now if you want to amp up the flavor and potency of the drink), and fill up the glass with your fizzy sweet soda of choice (or use sparkling water, agave nectar and extra lemon juice if you are adverse to purchasing commercial soda. Or the afore mentioned champagne if you are up for it). Use the end of the wooden spoon to stir it all up and then top with any accoutrements or garnishes you desire: a sliced strawberry gives you fun little boozy snacks to fish out while you are drinking, another slice of un-muddled cuke would look nice too since the muddled one is mush now.