A week ago, we returned from a two-week long family trip to England: Yorkshire, Cambridge and London, to be more specific. I'm breaking this down into a series of posts so I have an excuse to upload and share some of my approximately 400 photos without boring people to tears.

This post covers some of our favorite things from the week we spent in Yorkshire.

First, here's a crazy, beautiful panoramic view that Brian took from the peak of Roseberry Topping in Yorkshire. (Click on the photo to make it big.) My granny used to hike us up to the top of this place every time we came to visit and always pulled out an apple and a bar of chocolate that she had somehow secreted up there without us noticing. My mom, the kids and I are the little cluster of humanity near the left edge and the ocean is just viewable in the distance at the center. Yes, the sky was really that crazy shade of blue.

We stayed in a nice little village called Helmsley, which is at the edge of the North Yorkshire Moors, about 45 minutes from both York and the ocean, has a terrific ruined castle (named aptly Helmsley Castle) and is about a 2 mile hike from my favorite ruin to explore, Rievaulx Abbey. The kids were in heaven there--the boy critter listened intently to the entire audio guide and the girl-critter was thrilled to discover that you can climb all over ruins in England and no one will tell you to get the hell down or not to touch. It's weirdly different from their attitude toward grass in Cambridge where no one can step on the velvety stuff. But if you want to clamber around on a medieval ruin, go right ahead! 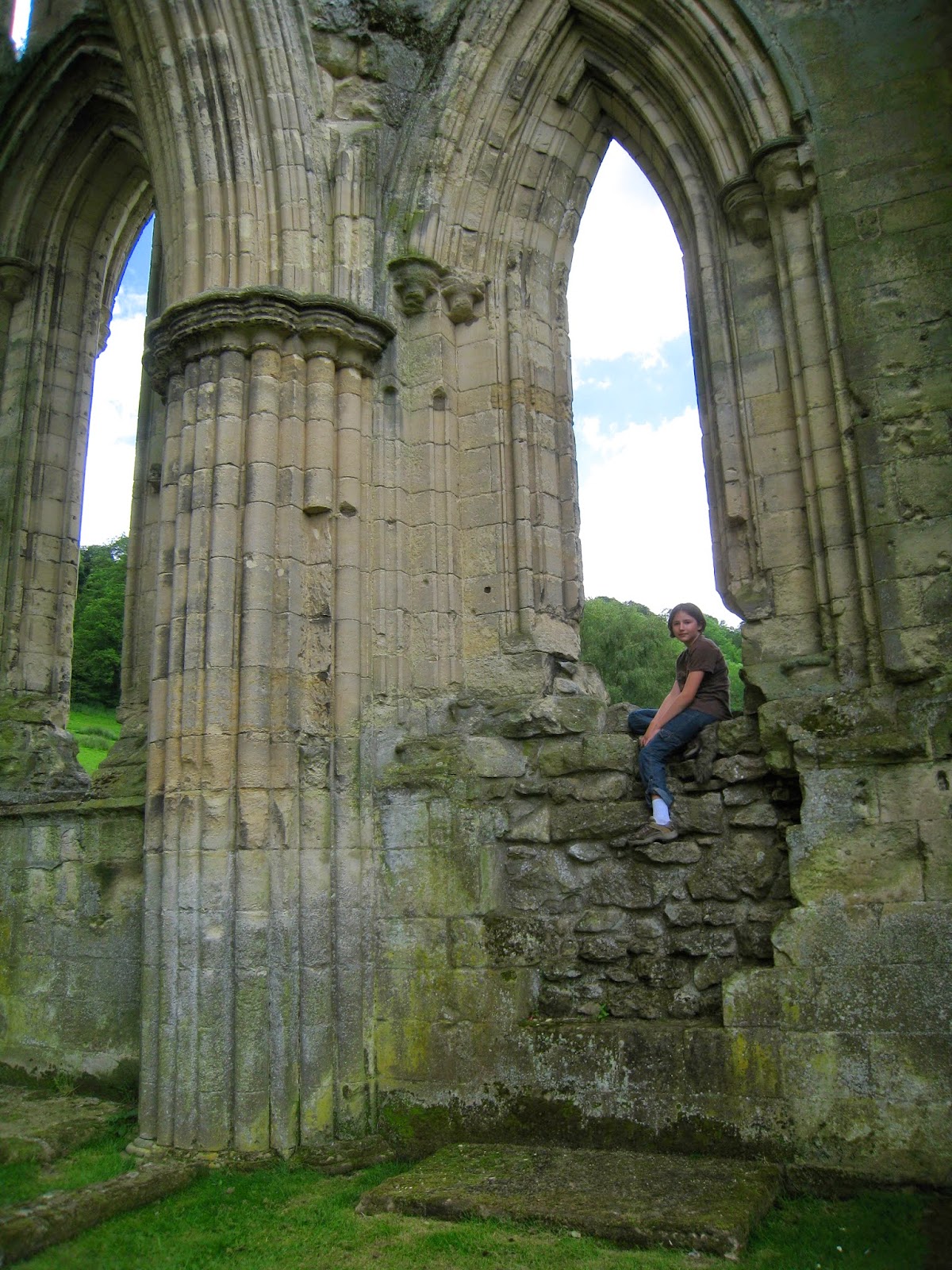 We visited the village, Ingleby Greenhow, where my granny used to live and went in the little church where her ashes are buried. 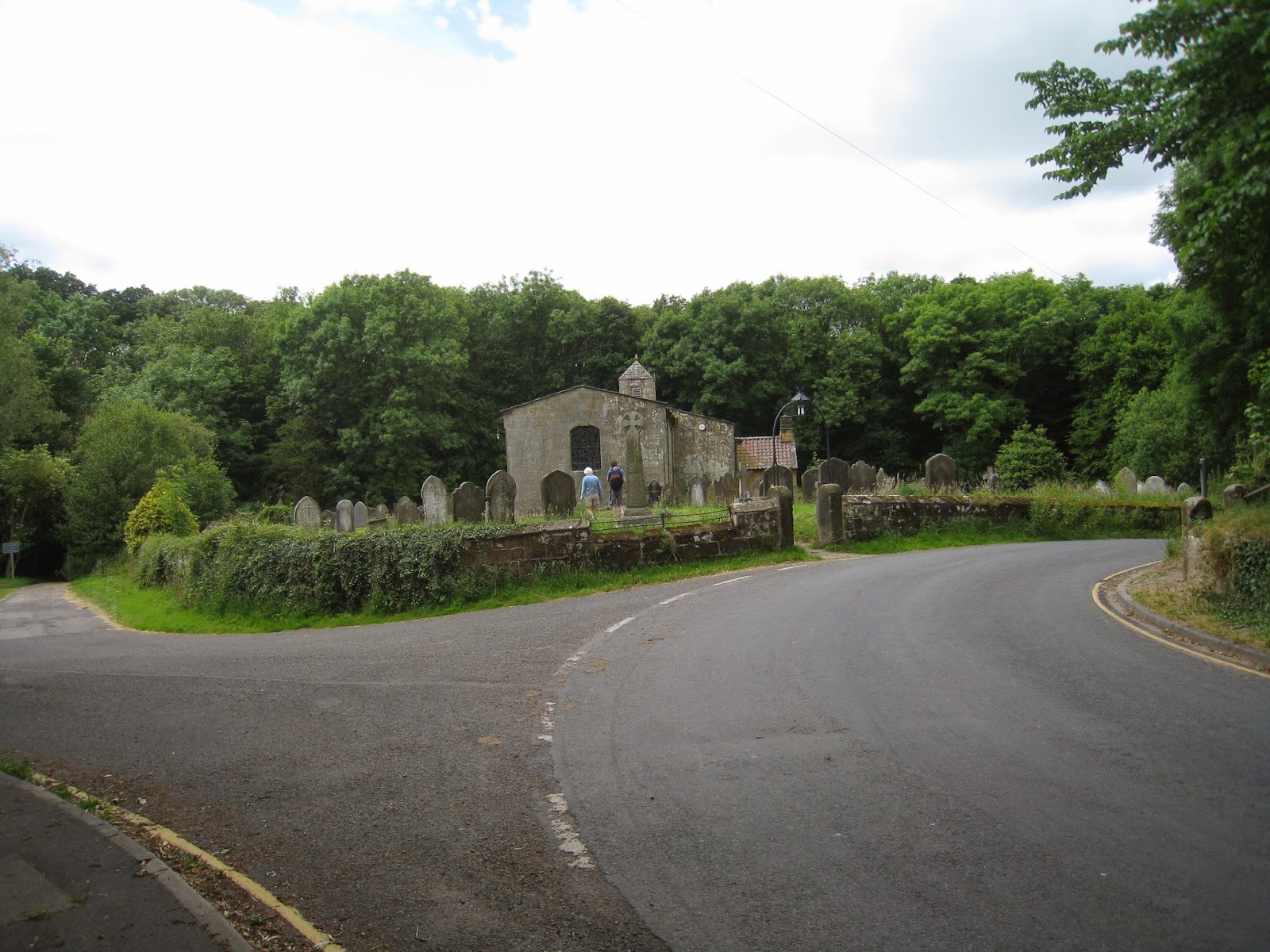 There we found a listing of the clergy from the founding of the church in 1189. Apparently the first one was named Reiner and came from Whitby Abbey. 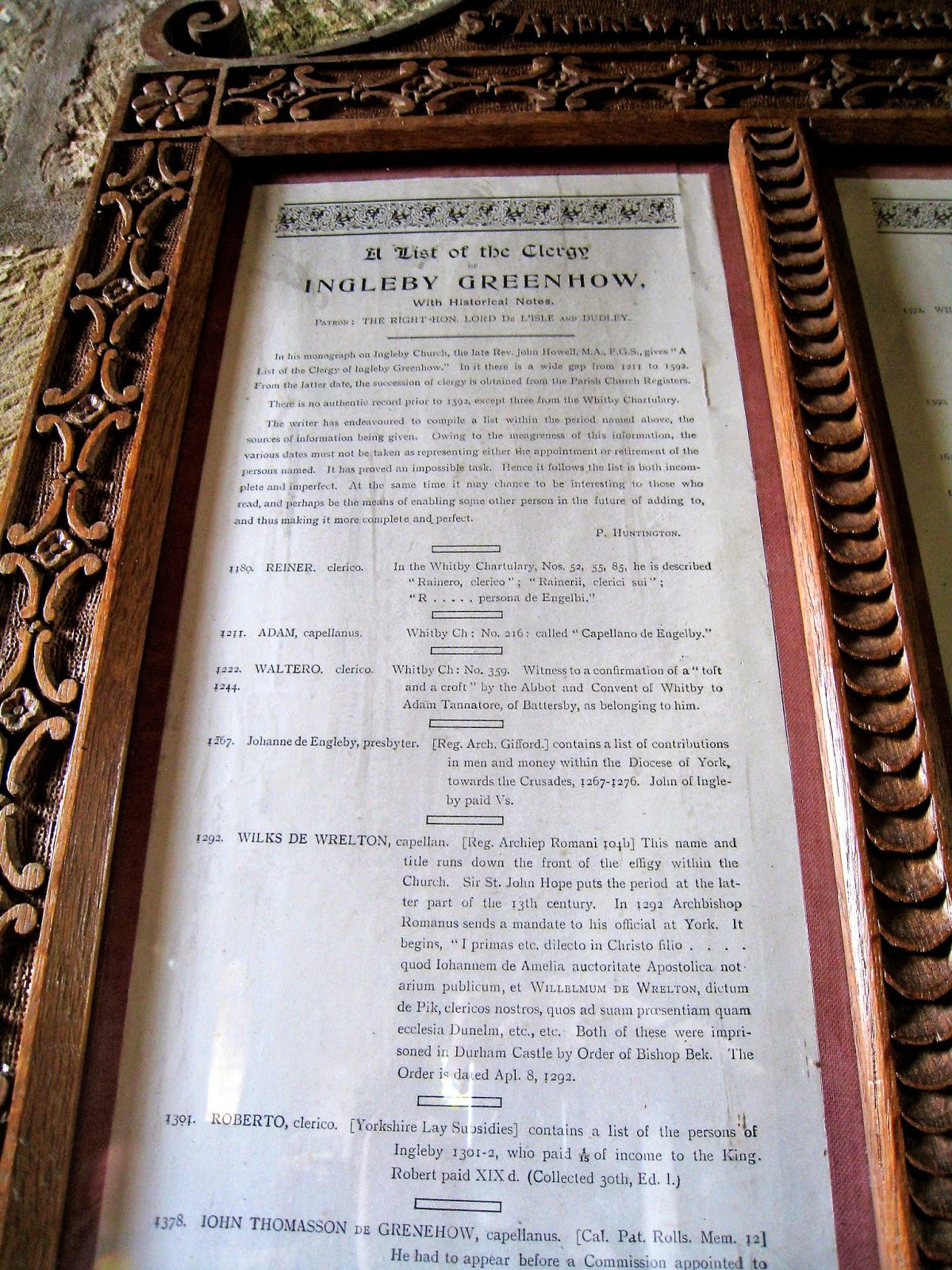 The girl-critter had fun taking pictures of sheep, including this poor fellow who had been half-sheared and was wandering on the village green in Goathland : 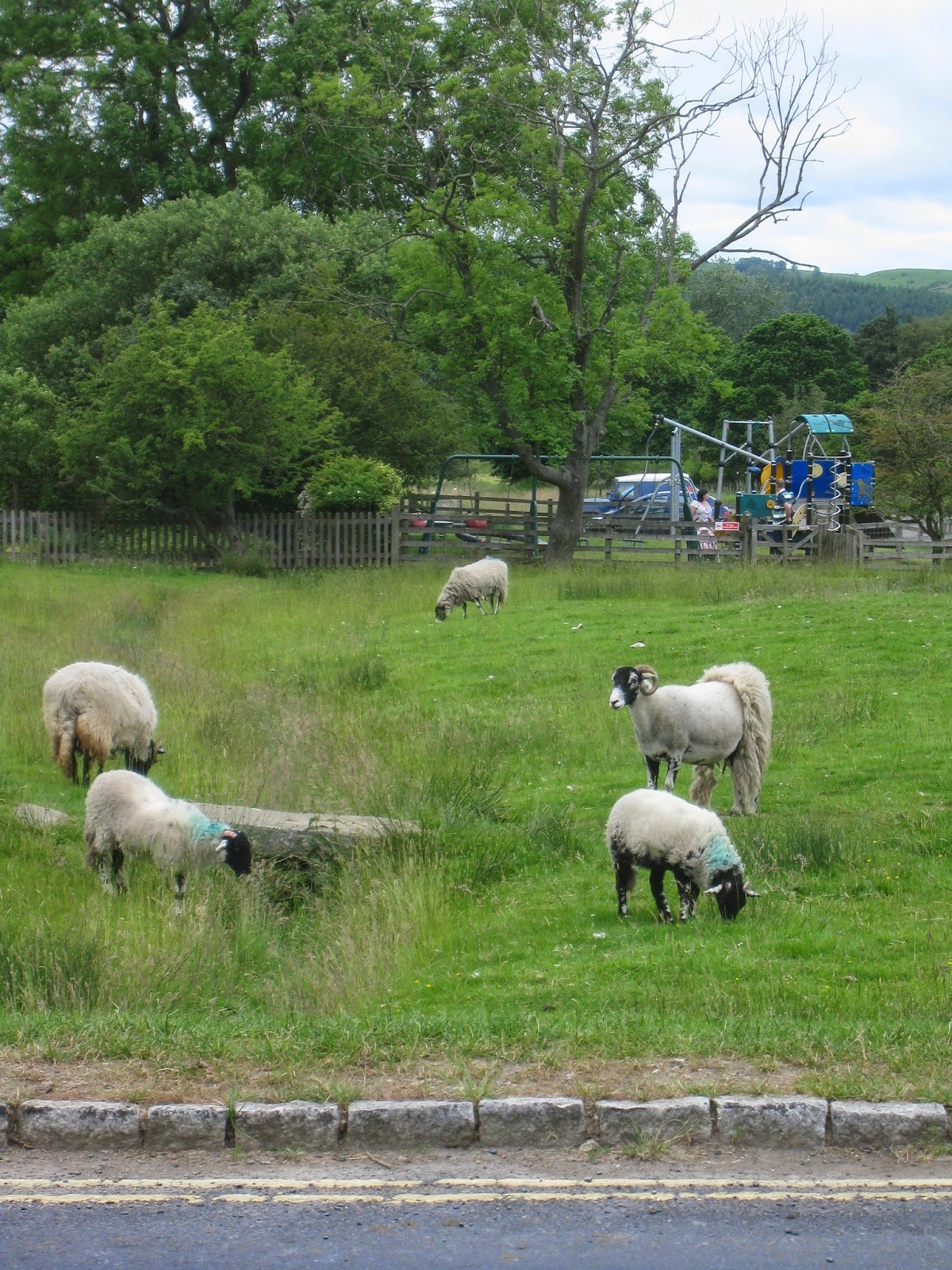 Goathland is also the train station which stood in for Hogsmede in the Harry Potter films: 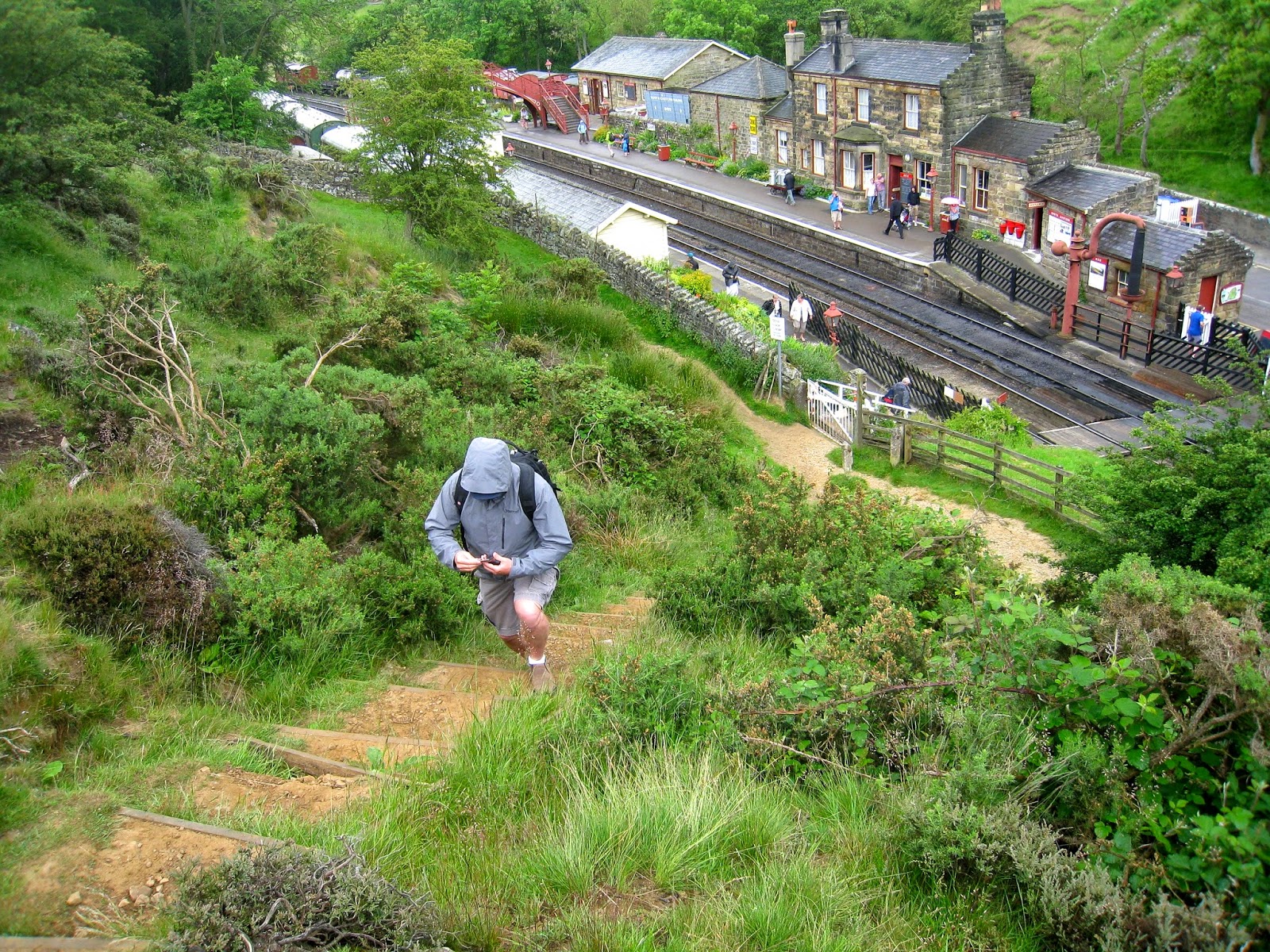 We went for a hike up on the moors there and had more wooly encounters.

We spent an afternoon poking through tidal pools at Robin Hood's Bay (which is a really beautiful little town, tucked away into the cliffs and is the end point, or starting point, of the coast to coast walk.) There we spotted a teeny tiny flounder, 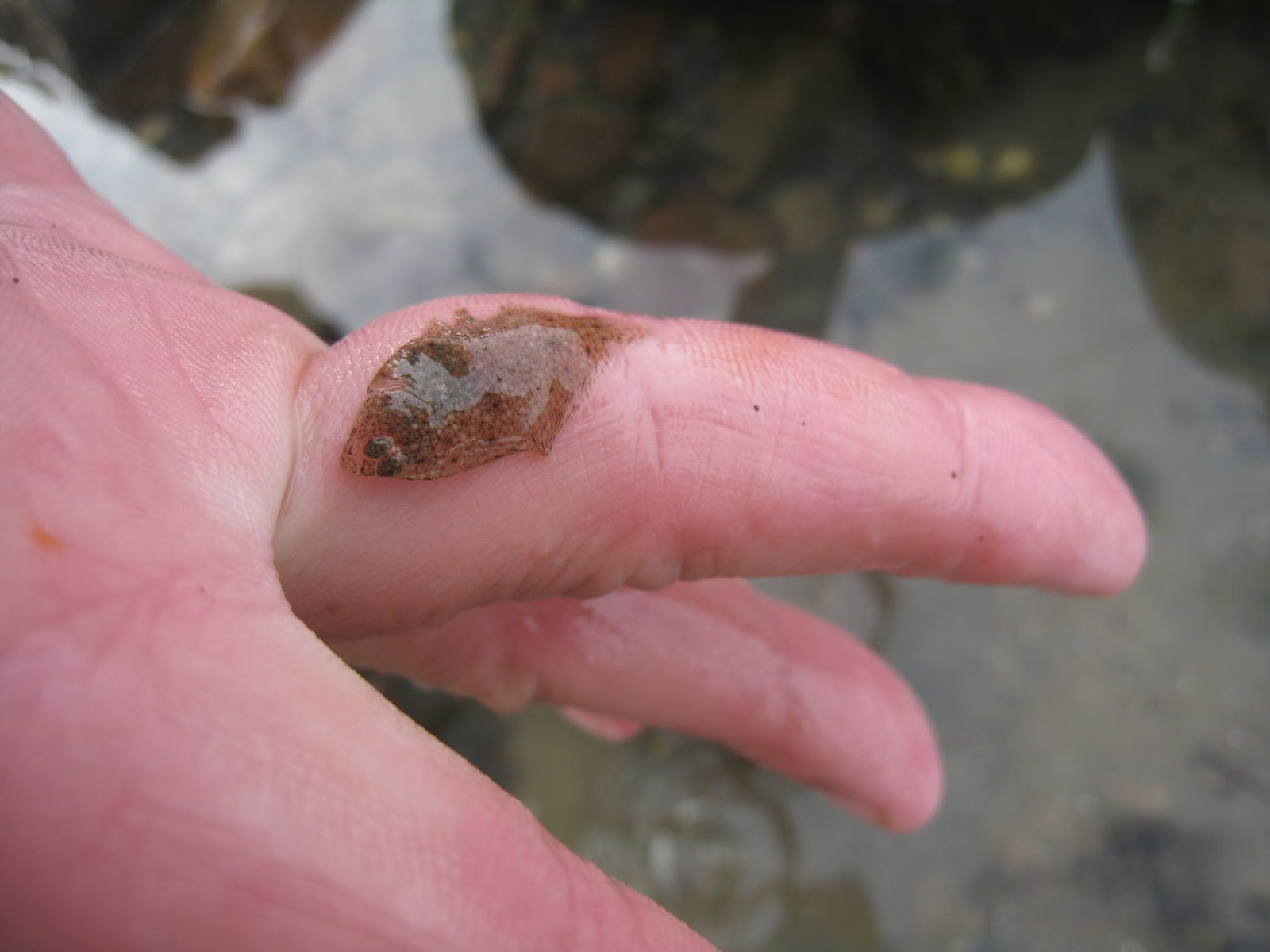 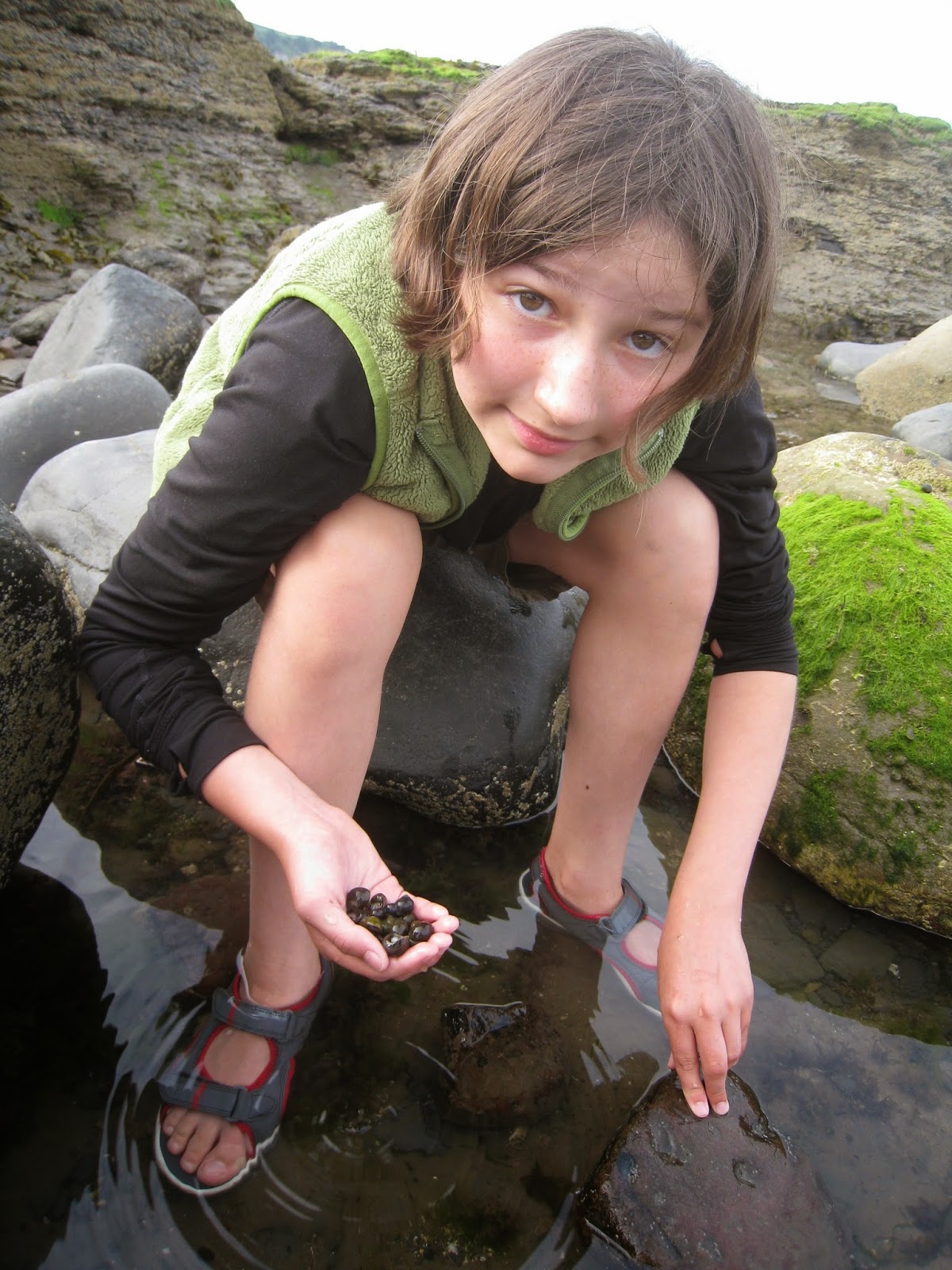 We also enjoyed exploring in Whitby and York, though I won't bore you with the photos. Instead I'll show you a few of the photos we took of signs that struck the girl-critter as funny. Here are a few favorites: 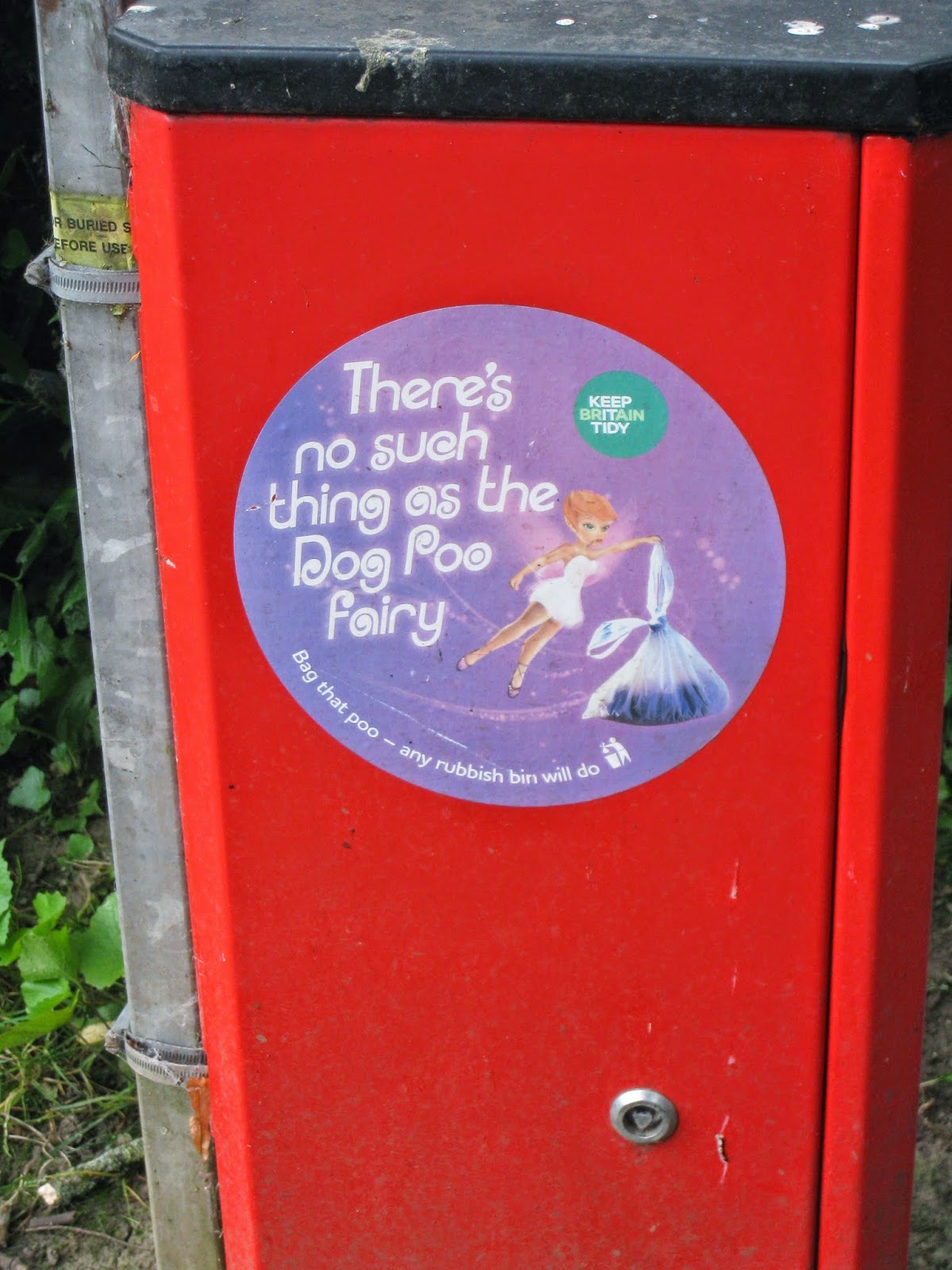 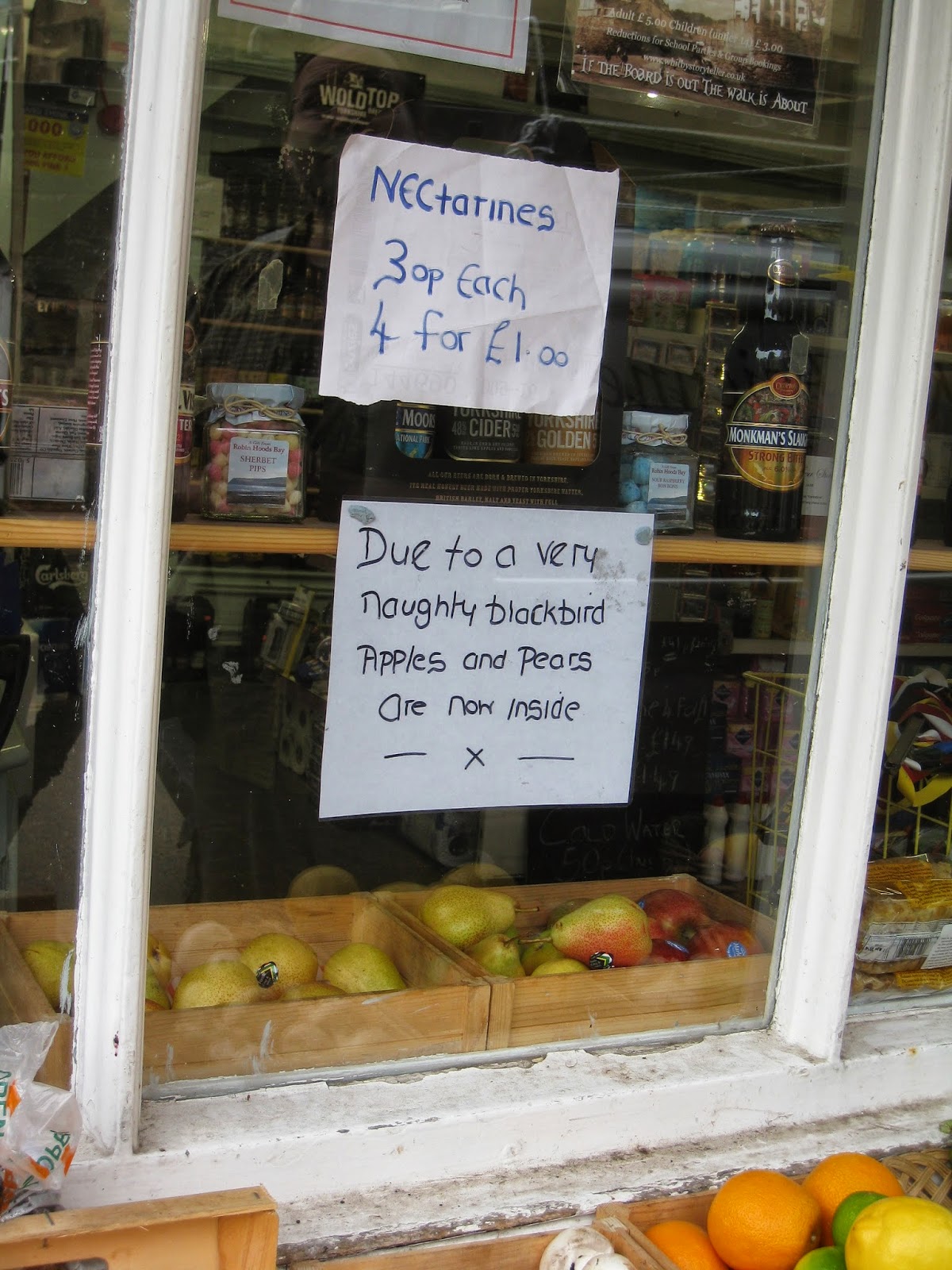 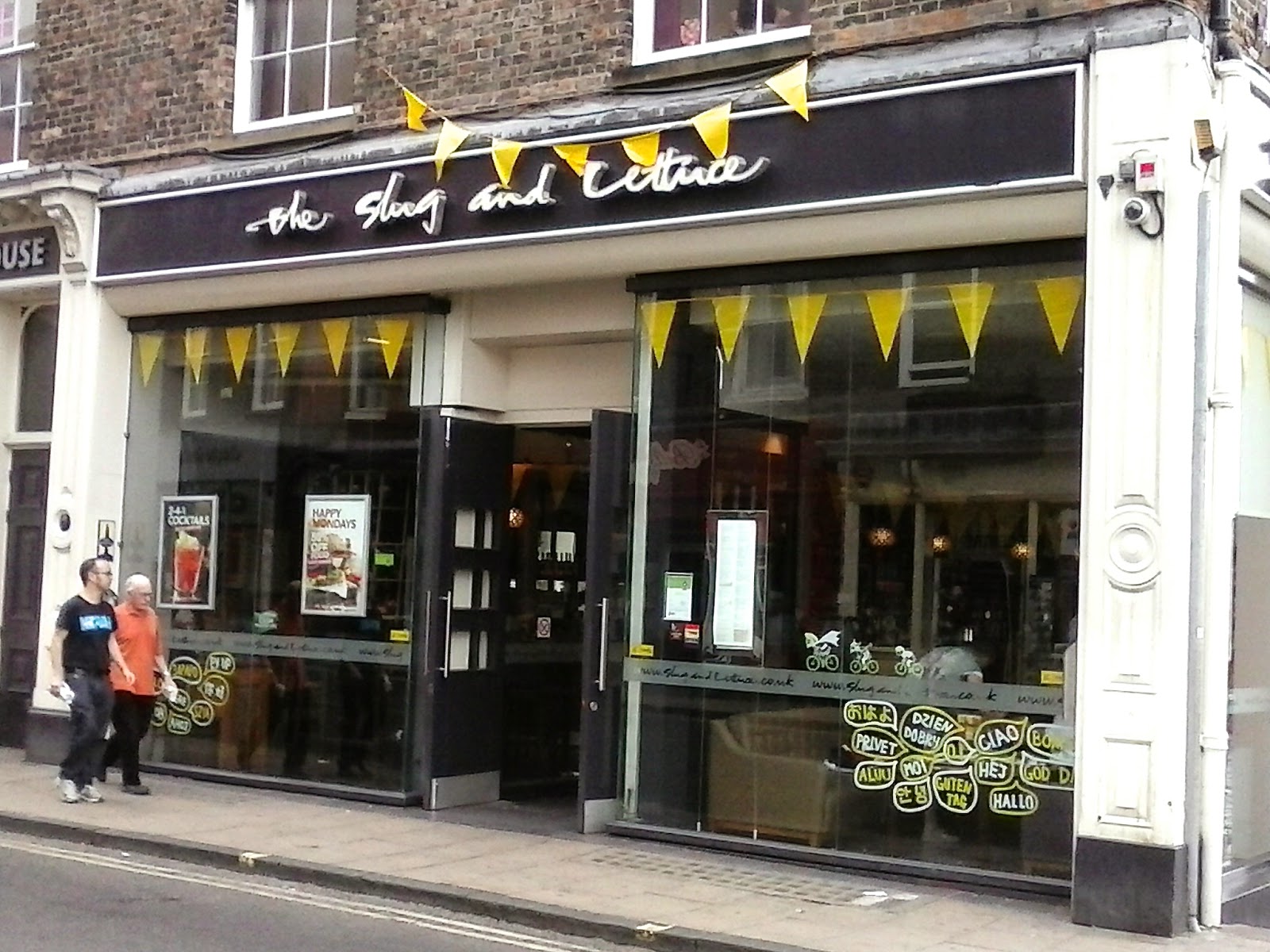 (I'm not sure if you can read the sign, but this is a restaurant named "the slug and lettuce.")

There's more to share about Yorkshire, but I'll save some of it for upcoming posts about food, books, London and maybe a few other things!

Thanks for sharing your trip. Loved the first installment. Pictures are great.