How much has food changed in England? I'm sure everyone already knows this but I can report from the ground: a whole bloody lot. My childhood visits were spent pushing bits of overcooked lamb and boiled cabbage around my plate and living off of the roasted potatoes (dinner), whole grain toast and bacon (breakfast), and dark chocolate digestive biscuits and good milk with cream floating on the top (all times of the day) that were thankfully plentiful. When I got older and began eating out in England, rather than just being fed by relatives, I suffered two intense bouts of food poisoning that I will never forget (I don't remember much about my aunt's flat in Wimbledon, but I can picture her bathroom floor very well since I was curled up there for a good 24 hours...)

But nothing of the kind now days. Not only did I not fear for myself or my family food safety wise, there was uniformly accessible and decent food nearly everywhere we went.

We ate amazing Indian take-away in the small Yorkshire village of Helmsley, where we were staying. I had steeled myself for disappointment but Helmsley Spice came through with flying colors. Sorry I didn't take a photo of it--I was too surprised by the quality of what we got and was greedily filling my plate, particularly with all the varied vegetable side dishes that we ordered.

We had some amazing fish and chips up in Whitby: 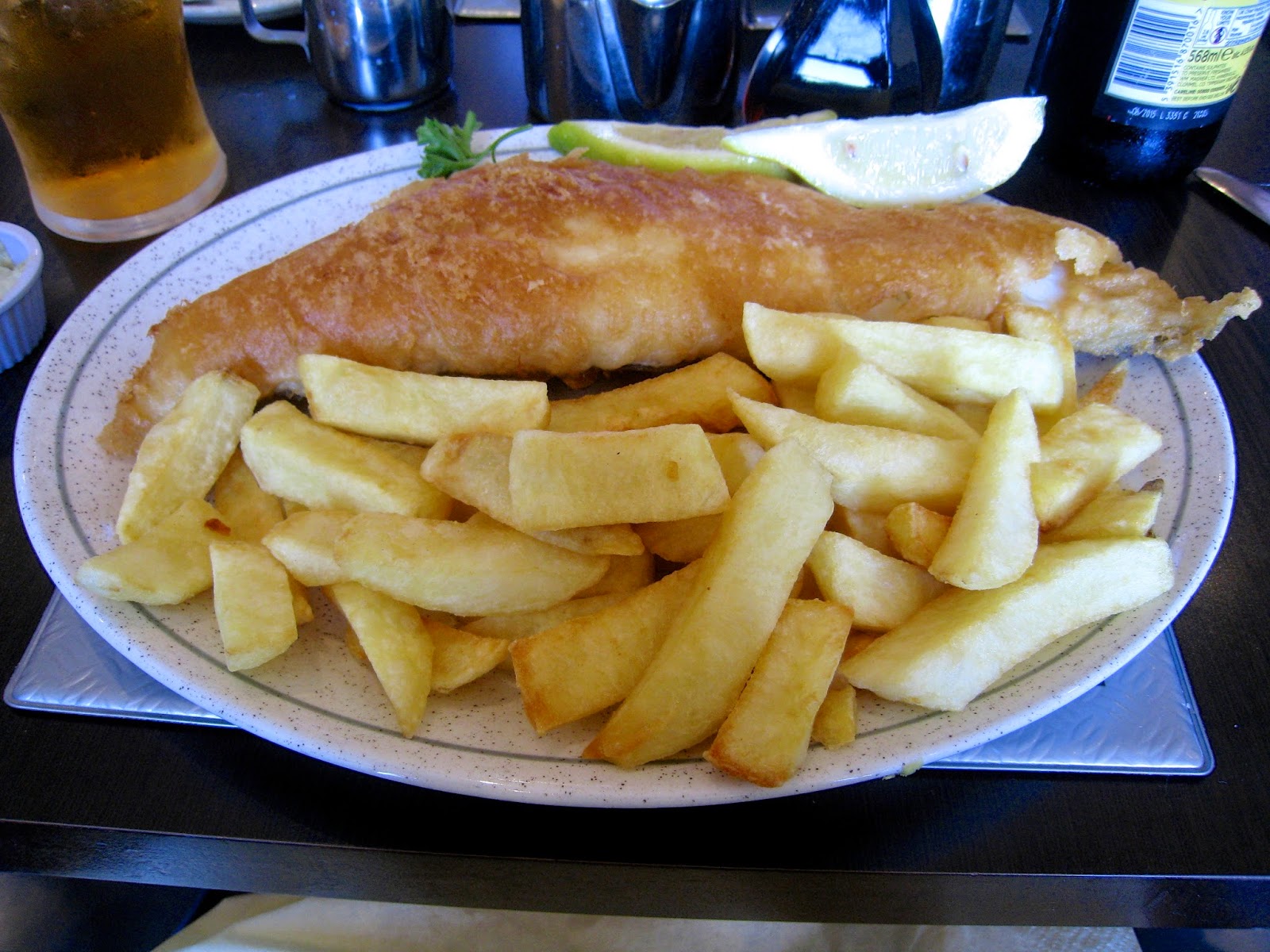 My haddock was almost still flopping on the plate it was so fresh. The restaurant even posted the variety of potatoes that were being fried up that day and the farm from which they originated. 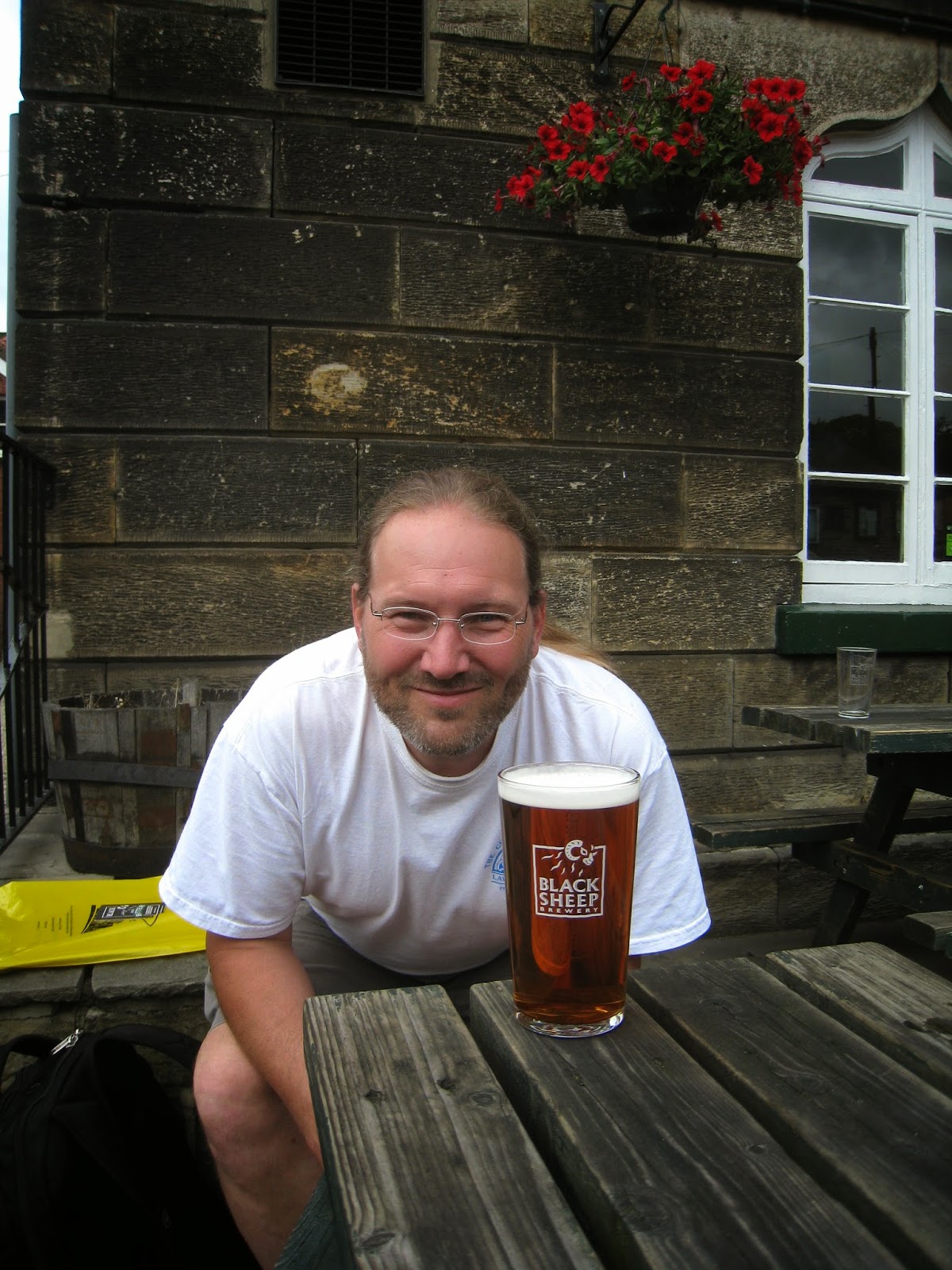 Brian was very happy about the good beer that was available pretty much anytime of day or night. We even managed to make it to the Black Sheep Brewery, though we were too late to get a tour. We did manage sample all their wares and have a really nice meal in their restaurant. 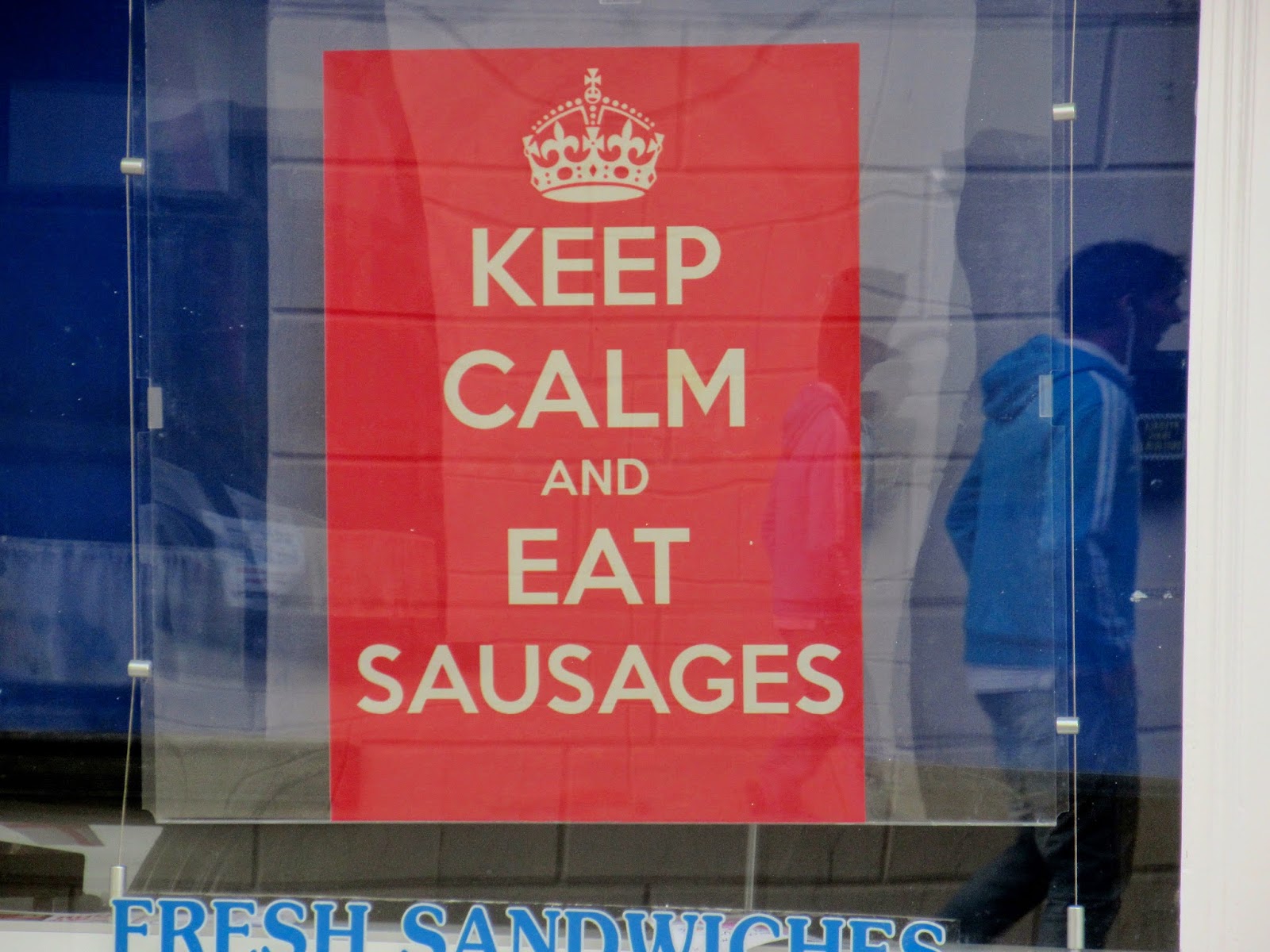 We did a good amount of self-catering since we were in rentals with kitchens almost the whole trip. So we followed this butcher's suggestion and had lots of bangers for breakfasts. All the eggs that we purchased at even the most basic grocery stores were free range and had beautiful school-bus yellow-orange yolks.

I present the next category of food with an appreciation and a complaint: We are so, so, so sick of sandwiches.  I'm talking about the convenient, prepack sandwiches that are everywhere in England and are so inexpensive and really pretty decent that you pick them up just to make sure that no-one's blood sugar gets to a compromisingly low level. And then you end up eating sandwiches pretty much everyday and come home sick to death of them. There's a huge selection of sandwiches including egg and cress, ham-cheddar-pickle, prawn mayonnaise, smoked salmon with tomato and cucumber and curry chicken salad that goes by the name coronation chicken. There are also some crazy one's like the example pictured below: 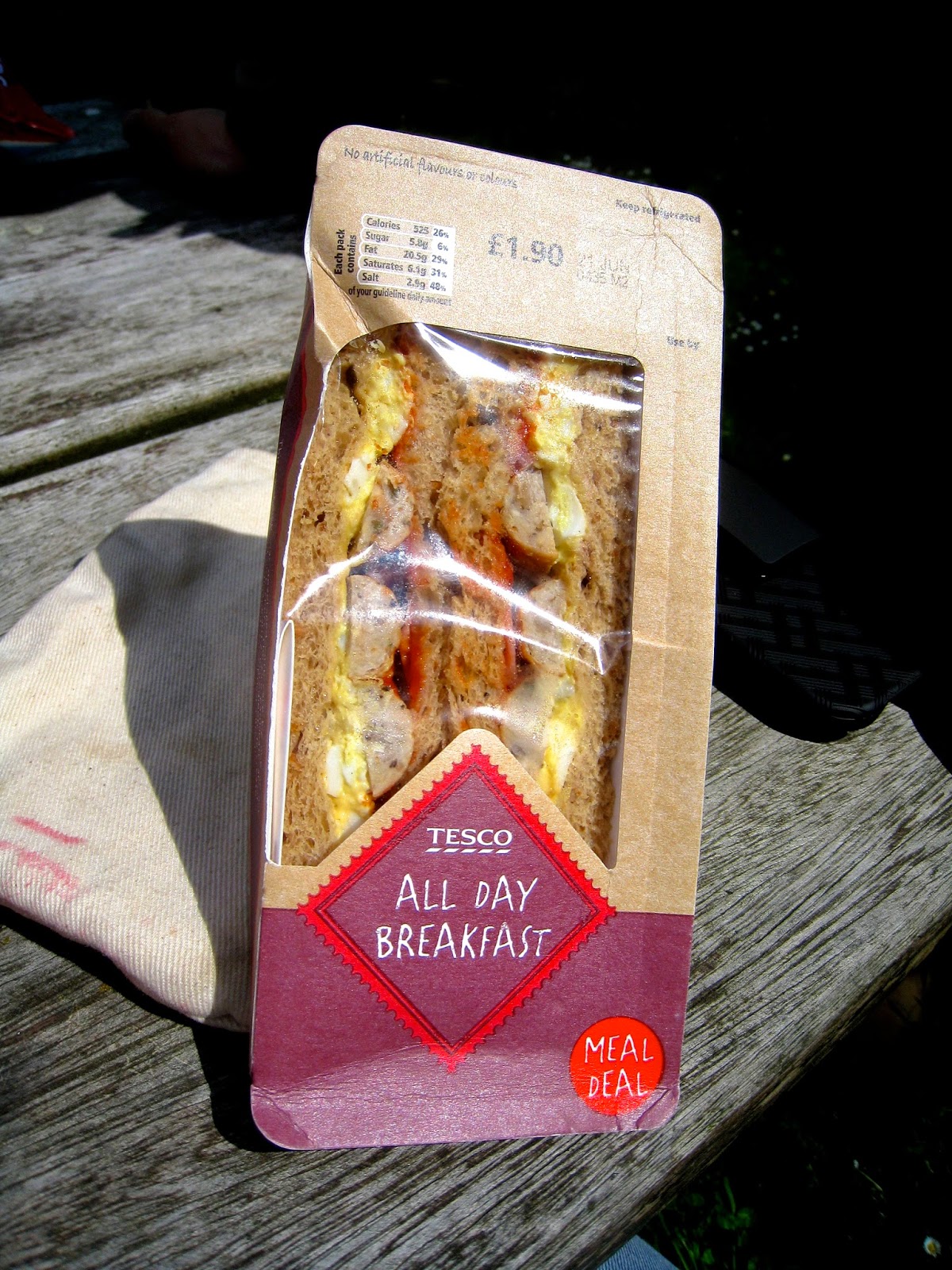 That's the "All Day Breakfast": cooked egg, bacon, bangers (sliced lengthwise) and a smear of ketchup on multi-grain bread for less than 2 pounds. No idea how it tasted (Brian ate it and he remained functional.) Honestly, I'd be thrilled to have prepack sandwiches of this quality and variety available here for when you're on the run and just too damn busy to think about food. But the problem was that they were too decent and too cheap to pass up so we ate too damn many of them.

We only had one truly lousy English meal the whole time! And frankly, I didn't mind it much because it made me feel like I was visiting the England of my youth in which this type of meal was pretty much served by each of my relatives when we came to visit.  The nostalgia factor was upped for me since it was in the pub (aka the local) that is a stumble away from my grandmother's old house in Ingleby Greenhow. 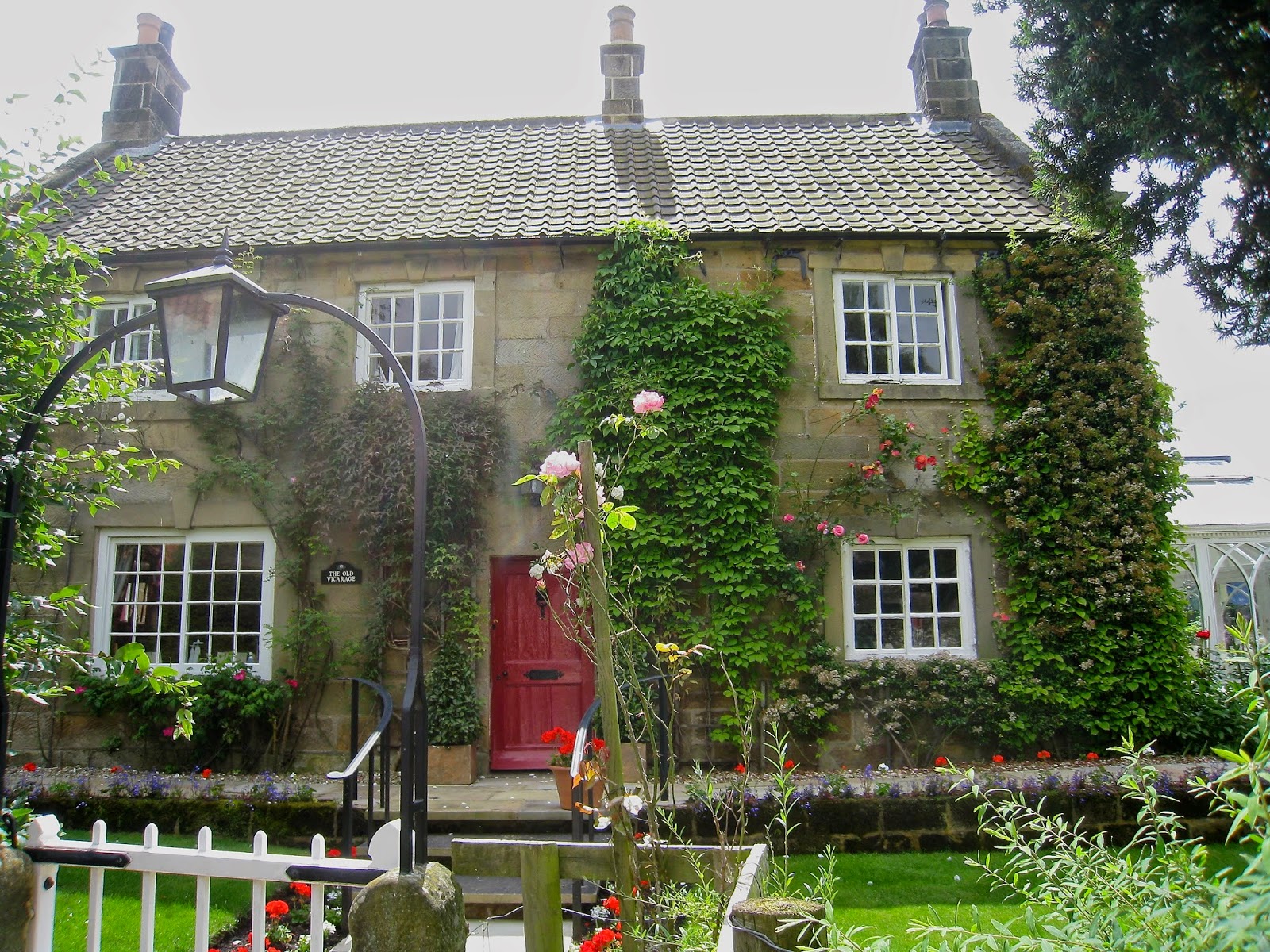 That's where Granny lived: The Old Vicarage. The present owner was kind enough to show us around a bit and he's done wonderful things with the place including such innovations as central heating.

I have no photo of the actual meal because, really, who wants to look at overcooked beef in a puddle of Bisto gravy served alongside carrots and sugar snap peas that have been boiled to death? There was a decent desert of apple sultana tart served with its own little pitcher of (Bird's) custard. I will give you a few photos of the charming pub in which the mediocre meal was served. 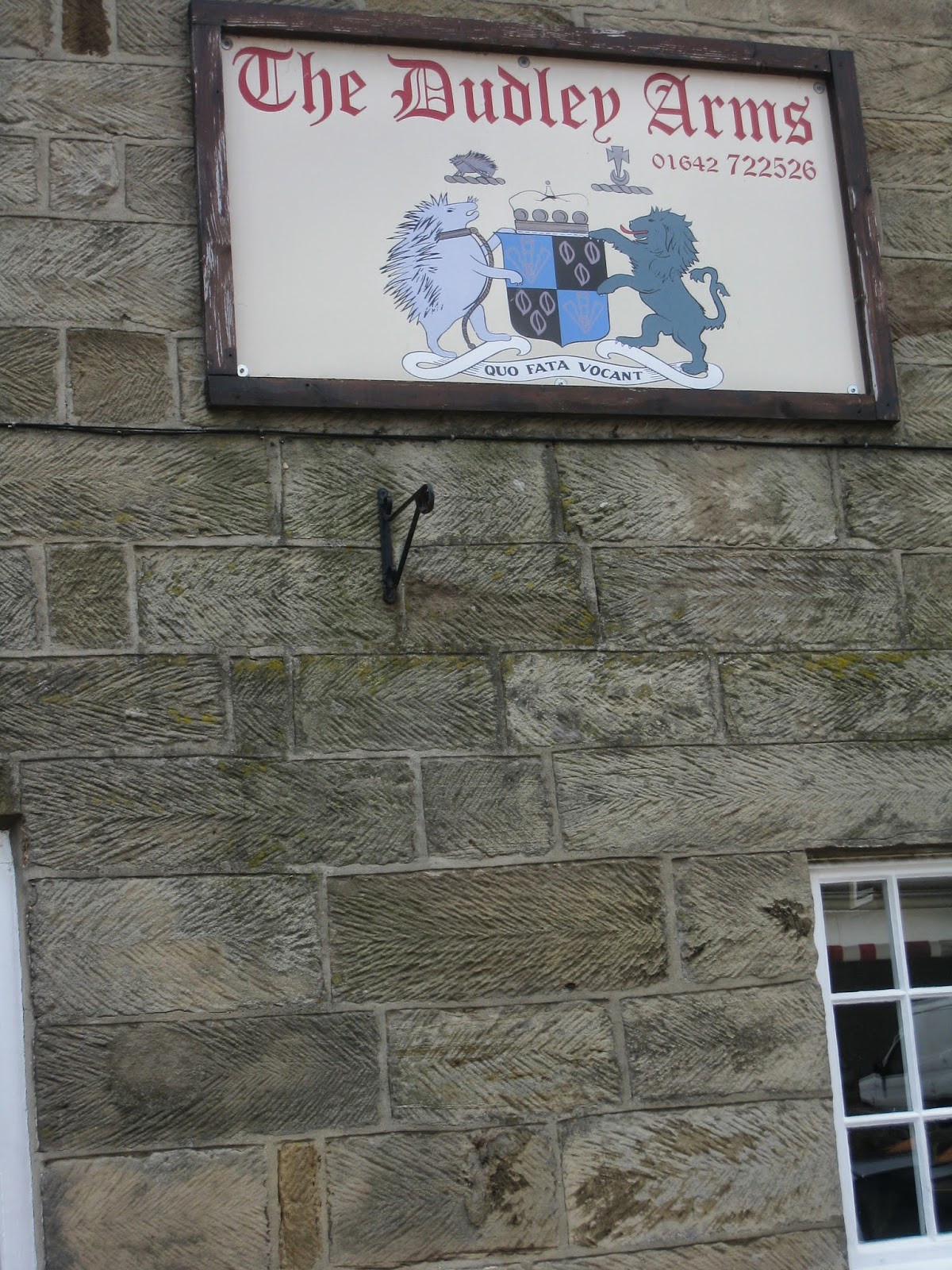 The Dudley Arms has a hedgehog on a leash as a part of their coat of arms. No idea why the latin translates into "Whither Destiny Takes Me" and which is also the motto of the Royal Northumberland Fusiliers. 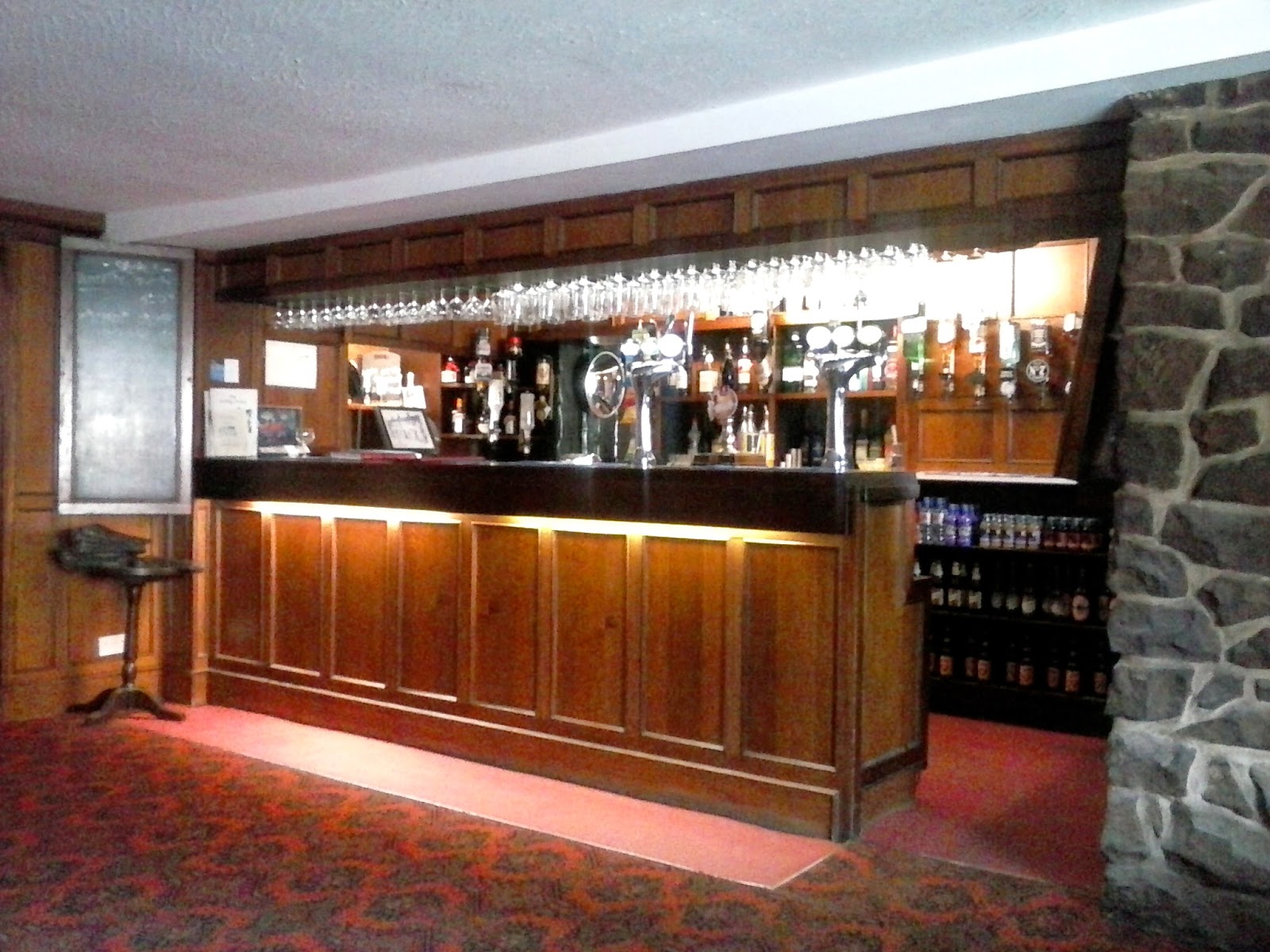 And here's the bar.

I didn't have any fantastic meals in London, though I know there are plenty to be had. I was traveling with my two suspicious eaters and, as previously mentioned, we were in self-catering accommodations nearly the whole time which saved us loads of money and reduced the stress levels considerably. Eating out when everyone is hungry, tired and grumpy is not something I enjoy--I'd rather stay in, eat boring-ish food and have everyone be nice to each other. It used to be really difficult for me to separate my love of food and my love of exploring the food of a different place from my expectations of what kind of travel is actually enjoyable with my family. Thankfully, now that particular-eater-#1 is 14 and particular-eater-#2 is 11 I seem to have finally stopped expecting food to be interesting on family trips. It's sort of sad, in a way, to give up the fight. But it is also a relief.
Posted by Kate at 8:18 PM

I want that plate of fish and chips! Right now, please!
Did you go back and read Laurie Colwin's chapter on English cooking before or after your trip? Maybe it can fill in for the things you didn't have.
So glad you had a chance to have this lovely trip!