Growing (and not growing!) things

This year, at the end of March, right when the quarantine was about to kick in, it occurred to me that we wouldn't be going anywhere for the near future and that tending a garden would feel therapeutic rather than like I was letting something (else) down.

A vegetable garden at my home is not an option. We live on a tiny lot: our back yard is 20 feet deep and 10 feet of that is a deck, while the rest is for our darling Molly to use as a dog run. Our house faces north so our tiny front yard is almost all shade, except for a rain garden that I love dearly. I used to have a vegetable garden that was located in my mother-in-law's back yard which I had mixed success with. She only lives a few blocks from us but I still had trouble getting over there often enough to be a responsible plant-steward. Sometimes I got a crop of something I planted and sometimes I didn't. By the second or third year, it was clear that the fast-growing tree in her neighbor's yard wasn't going to be pruned and it cast shade over much of the garden. So I haven't had a real garden in about 10 years. Since then, I have filled my gap of longing for fresh produce with CSA shares from Tantre and Homer Farms (pretty well documented here on the blog; click the labels on the right if you want to go re-live those days), trips to the Ann Arbor Farmer's Market (which is now open for pre-order pick ups) and Argus Farm Stop and, frankly, by being pathetically grateful when people bestow their extra garden produce on me. One of Brian's friends who has a huge garden told him he'd never seen someone get so excited by a bag of vegetables after he surprised us with his extras. I wasn't faking it: I really do get that excited by free zucchini (and then I make massive double batches of my favorite Turkish zucchini pancakes!)

Last year, a dear friend signed up for a plot at one of our town's community gardens and it occurred to me that this year, I could join her. I checked on March 28 and there was still a half-plot available and I jumped on it.

I am not a terrific gardener and my lack of the perfectionist-gene is pretty obvious if you survey the 11 plots at the garden. Some people have been creating beautifully laid out beds, little paths between their plantings and even geometric patterns. I weed, I loosen the soil and dig crooked rows, scatter some seeds and hope for the best! So far, something has eaten half of the pea seeds I planted and a bug has started decimating my kale leaves. Or maybe those are radish leaves? I didn't label the rows so we'll see. Anyway, I don't really care because anything I get out of this garden will be a plus and it will still be the best $80 I spent in a loooong time to rent the plot for the growing season. Now I have about 375 square feet in which to plan and feel hopeful and (very important) play with worms. Oh, and it also gives me a destination to get the hell away from my family when they are driving me crazy.

I also got really lucky in that the plot I was assigned has a ridiculous number of self-seeded lettuces growing on it. Here are a couple of views of all the bounty that I inherited from last year's gardeners and am happy to enjoy: 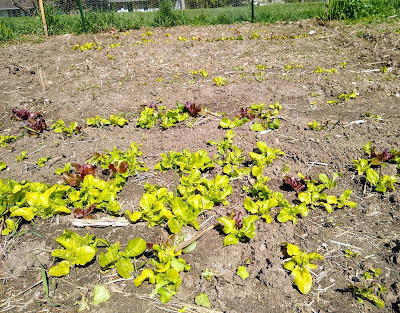 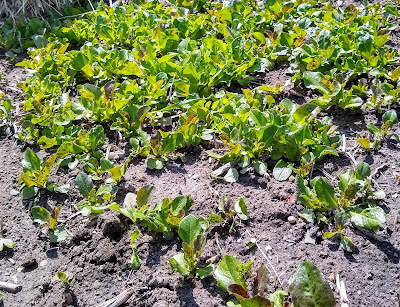 Yesterday, I thinned these out (there are still a ton left) and brought home a big bag of baby lettuces. 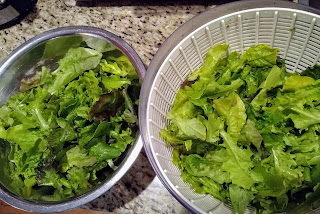 Which last night became this addition to our dinner table: 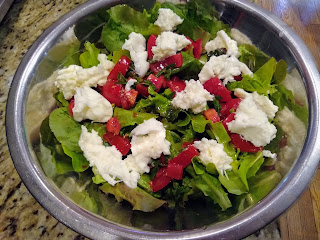 I cut up and marinated a few store-bought tomatoes in balsamic vinegar, salt, pepper, crushed garlic and chopped up basil and chives and then tossed them with olive-oil dressed greens and topped it all with a torn up ball of burrata cheese. It was fantastic.

And about that basil: there's a story behind it. It may surprise no-one that I am not the easiest person for whom to purchase a gift. Most of the time I suggest to the people I love that we do something together rather than having them make purchases and which I genuinely enjoy more than accumulating stuff. But Brian really loves giving gifts at Christmas and this year I found this thing under the tree: 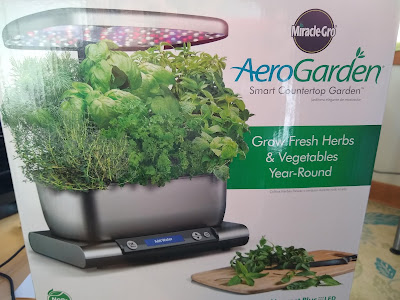 When I unwrapped it I thought it was the dumbest piece of garbage. If it worked (a big "if" in my head) it would just provide green stuff for our cats to consume and puke all over the goddamn house (the only houseplants we have are succulents which the cats leave alone. Every other time we've tried to have plants in the house the little furry fuckers have made us regret it). So I saw what was intended as a lovely gift as a sign that I'd soon be cleaning up even more colorful puke than usual. I tried to convince Brian to return it. He did not, just tucked it away in a closet. And we forgot about it.

And then he received the directive to work at home. It was just around the same time as I was looking at the community garden plots when Brian pulled this gadget out, set it up in his office (the door is closed most of the time so the cats don't get in there very often) and soon little things were starting to sprout. It was really sweet to see him so excited about his little seedlings, but I was still sure that it would prove to be a disappointment.

Boy, was I wrong. 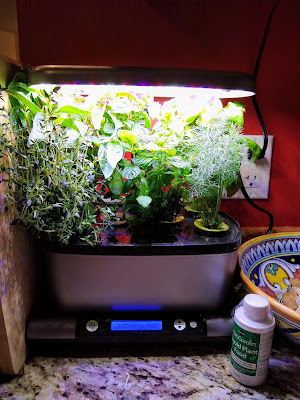 Not only do we have basil, Thai basil, thyme, dill and mint growing like crazy (the only thing that didn't germinate was the parsley), but we have also been able to move it out of his office and into the kitchen where I can actually use it easily and the cats are leaving it alone! I've tried to have indoor basil before and it was always mauled and masticated but they give this thing a wide berth.  I have no idea why: maybe the LED lights scare them off?

I've already done some pretty significant harvesting of all the herbs and it has been wonderful to be able to pinch off some basil or dill to toss in an omelet or some sauce or a blended salad dressing or to make a Thai tofu vegetable curry with a ton of Thai basil in it. The thyme might need some more aggressive pruning because my demand is not aligned with its over-zealous supply (ideas for using lots of thyme welcome!)

The other really nice thing about this gadget is that Brian has taken ownership of it: he checks the water level and the root-health and pays attention when to add the liquid plant food. I just get to use the glorious stuff which, like the lettuces in my garden plot where I reap the bounty of someone else's efforts, is the best of all possible worlds. Whether I succeed this year in growing anything doesn't really matter.

I spent years dreaming of an Aerogarden, but not ready to spend that much money. Then a few years ago someone on NextDoor was giving one away, so I picked it up -- and left it sitting around for a couple of years, un-used, before finally donating it to a friend's science classroom. Humans are weird.