A long post with at least one good rant

I've finally kicked that nasty stomach bug and can write about food (and other things) now that I'm not huddled in a little self-pitying ball. 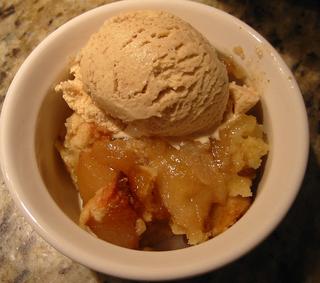 That's a modest portion (tummy still not up to gluttony) of apple crumble with homemade Cinnamon Ice Cream. The apple crumble was just a basic combo of apples tossed with a little brown sugar and lemon juice and topped with flour/butter/white sugar streusel, baked until the apples started to caramelize a bit. I purposely left the cinnamon out of the crumble so that the ice cream could provide the punch. And punch it did! This is terrific ice cream (I'm now imagining it in a Mexican sundae sort of combo with dark chocolate and toasted almonds). I modified a recipe so it had less sugar and evaporated milk rather than half and half. And I appreciate that it only has two eggs in it (I made rum raisin ice cream for my dad's 70th birthday last month and it had 8 eggs in it which was too much for me. The raisins and rum were good, but I thought the base was just too eggy.)

I used really good cinnamon in this ice cream-- China Cassia Cinnamon that I ordered from Penzeys which is intense and almost sweet on its own. (And which I will no longer have to mail order since they recently opened up a store in suburban Detroit).

In a saucepan over medium-low heat, stir together the sugar and evaporated milk and 1/2 C of the heavy cream. When the mixture begins to simmer, remove from heat, and whisk half of the mixture into the eggs. Whisk quickly so that the eggs do not scramble. Pour the egg mixture back into the saucepan, and stir in the rest of the heavy cream. Continue cooking over medium-low heat, stirring constantly, until the mixture is thick enough to coat the back of a metal spoon.

Remove from heat, and whisk in vanilla and cinnamon. (The cinnamon will float to the top in annoying little blobs and refuse to blend. Don't worry about it--it'll get incorporated when in the ice cream maker). Cool to room temperature then refridgerate until chilled.

Pour cooled mixture into an ice cream maker, and freeze according to the manufacturer's instructions.


While we are on the subject of food, here is a photo of my favorite main course while in Europe: 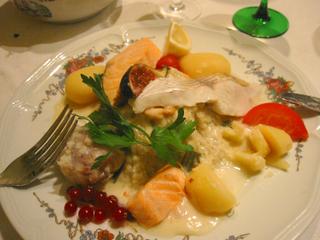 Choucroute aux trois Poissions
We ate at a traditional Alsatian restaurant while in Strasbourg and I had a chance to try a choucroute that was loaded with fish rather than meat. The traditional choucroute has chunks of varied meat products (think plain and/or smoked ham, sausages, and if you order the Choucroute Royale, a big old cow tongue plopped in the center. I avoided the Royale version...).

By the time this meal rolled around I was having a bit of a pork overload, so I was interested to try the fish version and it was terrific. On the bed of sauerkraut simmered in wine with a little bacon (so not entirely pork free) were some small shrimp, a piece of salmon, a piece of monkfish and a piece of haddock, and a few potatoes. Then there was a nice puddle of beurre blanc and some lovely garnishes--fresh red currants and a chunk of fresh fig and a few slices of nicely ripe tomatoes. For me the garnishes were what elevated the dish beyond merely pleasant--the bite of red currant really cut through the fat in the dish, and the proportions were perfect. The currant/fig/tomato didn't compete for attention, but provided just enough contrast so I didn't go into richness overload.

I was pretty darn full after consuming that plate of cabbagy fishy goodness though, so I wasn't able to take on any of the outrageous looking desserts on the menu. Instead I retreated to my favorite clean dessert--three scoops of sorbet, which I have already stated, the French seem to be able to way better than we do. 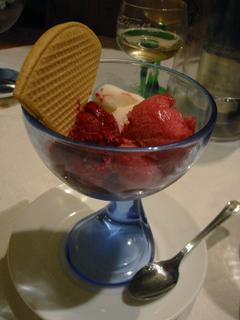 Cassis (black currant), peach and lemon sorbets
Now on to my rant which manages to incorporate books and food--I am loving David Maine's Fallen which is good because I'm hating Pope Joan with a passion. Right now I'm rewarding myself for slogging through 100 pages of Joan with about 10 pages of Fallen, kind of like a book antidote to literary toxin. Pope Joan contains horribly clumsy writing, annoyingly predictable scenes and worst of all, some incredibly sloppy factual errors. Donna Cross has clearly researched the history of the church in this period and knows her Latin, but the woman does not have a feel for the every day life that actually brings a historical novel to life. I present to you a factual error on page 30 that had me reeling when I read it:

"The meal was splendid, the most lavish the family had ever prepared for a guest. There was a haunch of roast salted pork, cooked till the skin crackled, boiled corn and beetroot, pungent cheese, and loaves of crusty bread freshly baked under the embers."

There is one MAJOR and one minor thing wrong with the above meal. This scene is in 822 AD near Mainz in what is now Germany and the family is eating boiled corn. Corn was not introduced to the European continent until after the Age of Exploration to the New World, say the 1400's. I will grant you that the word "corn" could be used in its Old English sense as a "grain with the seed still in". If the book was better written, I'd probably cut the author some slack here and assume that she was using the word in such a way, but since it isn't I'm going to keep my rant as is. The minor wrong? I've never heard of salt pork being roasted much less developing a crackling skin. You need a fresh pork roast to get crackling.

I'm more sensitive to mistakes like these because I've been spoiled lately reading Sara Donati--her research is thorough and brings the past alive incredibly well. While reading her books I have made corn bread (and corn muffins with blueberries) more times than I can count--when a book inspires me to go to the kitchen to recreate a little bit of it in my own world, well, that's effective writing. Yes, when I read Jane Austen I drink a lot of tea and when I read Vikram Seth's A Suitable Boy, my kitchen smelled of ginger, garlic, cumin and tumeric (it's a long book--1488 pages--so we were eating primarily daal and raita for a couple of weeks) .

Donati researches the hell out of her settings and yet manages to incorporate the research without hitting you over the head with it--something not easy to do. Most people can access accurate information these days if they care to, but getting it into a fictional story without having it stand out as a Self-Consciously-Researched-Moment is much harder and Donati is very good at getting the information in there without making you feel like you are reading a text book. Wondering about how people used to deal with mosquitoes? Bear grease or an ointment made with penny royal. Want to learn crop planting techniques? Use corn as planting support for vine plants like beans and squash (and the beans will also revitalize the soil by putting the nitrogen back). And if you want to know how early vaccinations against small pox were done, just read the third book in her wilderness series, Lake in the Clouds. Not only will you learn the technique, but you'll come away with a feel for the process.

I really liked Lake in the Clouds, even more than Dawn on a Distant Shore (Book 2). I didn't mind leaving Elizabeth and focusing the book on Hannah--it was clear at the end of Book 2 that we were heading that way. Besides, I have a soft spot for fiction that deals with medical techniques (as I mentioned while raving about Saturday by Ian McEwan). There was only one teeny weeny thing that put up a red flag for me (and again, it has to do with food)--after Hannah and Curiosity have spent the night at Kitty's death bed, Hannah returns to her family at Lake in the Clouds with the news and with her she brings Curiosity's fresh baked bread. Bread takes a while to make and I just don't think Curiosity had time to be kneading, shaping and baking loaves while attending the death bed. Maybe if her daughter Daisy had made it, or maybe if they were biscuits, I'd believe it. But this is a pretty minor complaint when compared to all the details that Donati gets right, not to mention a thumping good story (unlike the clumsy prose and contrived scenes of Joan).

On the knitting front, I'm pleased to report that the two-year-old is no longer scared of my gloves: 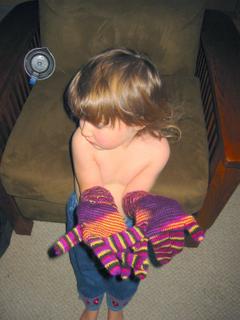 Shortly after flapping around the house she stuffed the gloves in her teapot and tried to serve them to me as a beverage...so maybe they are a little fruity.

I'm stuck at the point of dealing with blocking the Ribby Cardigan and then doing the zipper band and collar (roll-neck version for me). I hate blocking so this time I'm going to try the steam blocking method that Bonne Marie describes in her Ribby Cardigan notes. I need to go get some distilled water for the iron to do this and keep forgetting...

I decided I needed a little lower stress knitting so I started a really basic pair of socks to gift to someone for Christmas--no fancy pattern, just some Knitpics Parade self-striping yarn in plum done up in the most basic way. I'd forgotten how relaxing knitting can be when you don't continually push yourself, and since Parade is a bit thicker than most sock yarn, it is going pretty fast too.
Posted by Kate at 6:41 AM

As always, your food desciptions leave my mouth watering! Can I hire you as my personal chef? :-)The pics are not showing up on the page, though. Perhaps too big?

Oops! Nevermind ~ there they are!

Have you by chance read any of the Outlander series by Diana Gabaldon? Another well-researched set of historical novels. As long as you aren't annoyed by bits of time-travel, which she fits in with perfect sense.

What a great post, Kate! And I love the idea of reading one book as an antidote to another. I tried to read Pope Joan when it first came out--I would been an ideal audience for it at the time--but could barely begin, let alone finish it.

I've read Outlander! Didn't the last book in the series just come out?

I haven't read the Outlander series--I'll have to remember it when I finish the next Wilderness book. Thanks for the recommendation!

Ha ha, funny about cooking to go along with your reading. When I'm in my Patrick O'Brian phases (ok, that's all the time) my family has to eat various suet puddings with names like Spotted Dick or Boiled Baby.

What a cute kid. The gloves are a little scary at first glance, I don't blame her for her caution).

Thanks for the good words about the novels, and I'm going to go look at the bread bit, to see how I missed that. I usually pay close attention to bread bits. It's one of my (many) favorite foods.