Southern Food by a Yankee

My garden is in its final stages and when your garden gives you this: 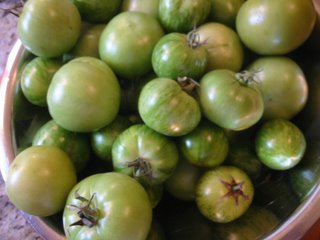 A whole lot of green (unripe) tomatoes
and this: 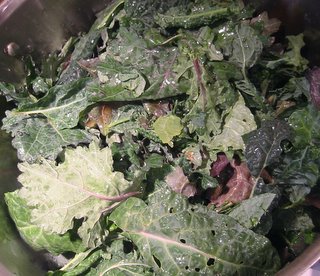 a whole lot of kale (Red Russian and Lacinato varieties)
even a Northerner like me feels the urge to cook Southern. Since the most Southern my roots go is the Flatbush neighborhood in Brooklyn, I called in the advice of two of my favorite southerners--Sarah (Atlanta) and Meg (Memphis).

Of course, fried green tomatoes could start off a Southern meal, and the kale could be treated like collards and stewed up with a ham hock, hot peppers and a little vinegar. But what else should one add to make it a meal? After a number of considerations (biscuits with ham? ham and red-eye gravy? hoppin'-john?) Sarah proposed that magic word: grits.

This past summer, Lynne headed South with her family and got hooked on grits. She traveled with a Southerner who had the pleasure of introducing Lynne to the addictive combination of Shrimp and Grits. As Lynne was generous enough to share the recipe on her blog and I'd been itching to try it, this seemed like a good excuse.

Unfortunately, Meg came down with a cold (as did Sarah's Brian) so I invited a few more Yanks to join us: MJ and Lou and Iris.

I've never made Fried Green Tomatoes and they turned out pretty well. My big concern was getting the batter to stick on something as wet as a tomato and an initial dip in flour did the trick. They were a little bit tart, a little bit salty and quite crunchy: 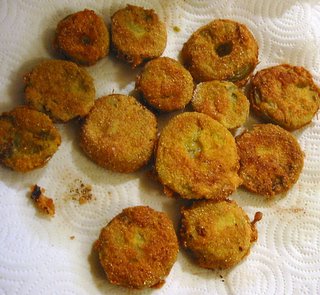 Here's how I made them and what I learned (in bold):

Ingredients:
Green (unripe) tomatoes--any non-cherry variety, at least 4 big ones or many smaller ones
salt
flour
1 egg mixed with a little milk
corn meal
pepper
oil for frying (I used Canola because it was what I had in the house though I bet peanut would be better) with the addition of 3 T bacon fat (for flavor!)
hot sauce

1. Prepare your tomatoes. Cut out the stem and then trim off the tops and bottoms so you have flat surfaces for the batter to stick to. Cut the tomatoes into 1-1.5 cm thick slices and salt generously (the first few I made were not pre-salted and were bland. A green tomato doesn't have much flavor on its own so you have to help it along.)
2. Set up batter assembly line: in one bowl put about 1/2 C flour to which you have added some salt and black pepper (seasoned salt or a little cayenne would be good here too), in the next bowl beat the egg with a little milk till it isn't too gloopy, and finally, on a plate put about 1/2 C of yellow cornmeal (with a little more salt and pepper if you like.)
3. Heat up about 1/4 inch of oil with the bacon drippings in a deep frying pan until hot (I don't use a thermometer but you can drop a little corn meal in and see if it foams up when it hits the oil). Then take a tomato slice and dredge it in flour, dip it in the egg and then drop and flip it in the corn meal before popping it in the hot oil.
4. Cook on one side 'till nicely brown (beyond golden to really brown--again, my first few weren't cooked long enough.) Then flip the tomatoes (tongs work well) and cook on the other side until equally deep brown; the tomato inside should have lost its bright green color and have turned a light olive--that means it is cooked.
5. Remove from the oil and place on a paper towel or paper bag lined plate. If you have a lot to fry mine did pretty well waiting in a warm oven for their brethren to emerge from the oil bath--they didn't sog much at all.
6. Serve with hot pepper sauce (tobasco or the like).

We managed to eat all the tomatoes while reading stories to the kids and getting them tanked up with kid-food (Mac and cheese, crunchy peas, raisins, banana bread, yogurt, etc.). Then, thanks to a DVD of Harold and the Purple Crayon, the grown ups actually got to sit down and eat this: 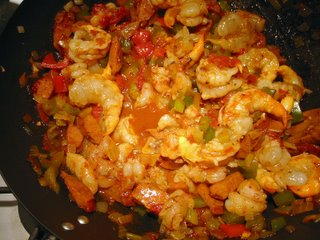 Mmmm. Shrimpy sausage-y goodness. Get the recipe here.
with this: 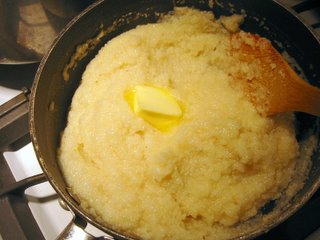 White grits cooked with chicken broth and dolloped with butter.
and this: 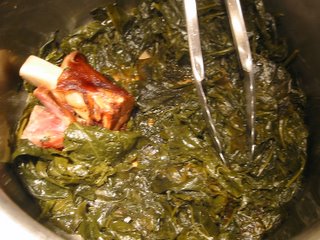 Kale masquerading as collards.
which made us feel like this: 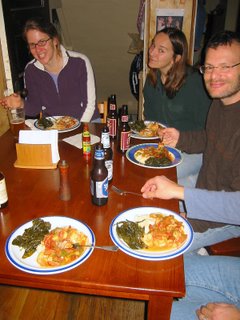 This would be the state that Meg's son refers to as "Happy Tummy."
We polished off the evening with peach/raspberry cobbler (yeah for frozen fruit!) served with vanilla ice cream.

While there was only one Southerner to truly assess the cooking (and we softened her up with a good supply of wheat beer), it seemed like a successful foray into food that I didn't grow up eating. And I still have lots more green tomatoes left.
Posted by Kate at 8:39 AM

Your recipes look very good! I just started my blog recently , so feel free to check it out and share with Your friends. I sure could use some feedback ! I have to blogs. My recipes are on chefclyde.blogspot.com and then there is my floridaclyde.blogspot.com

I have had mixed success with fried green tomatoes. My main problem, aside from the fact that my kids would have nothing to do with them, was getting the batter to stick. Next time I will try dipping in flour first.

Mmmm, Fried Green Tomatoes... best dipped in Ranch. We actually had them at the Whistle Stop Cafe twice now. Its one thing I have always wanted to try making, now you have inspired me! :)