Sigh. Sometimes the internet provides me with too much information. Thus I find myself with a gelato conundrum: when can I say "I made gelato" with confidence and not worry that what I made was really "ice cream"? (I know, clearly, things must be going pretty well in life if this is what I'm worrying about.)

There are many different definitions of what makes a frozen concoction into gelato rather than ice cream which include:
I can't do anything about #5 since I'm not about to invest in yet another piece of specialized (and no doubt imported and expensive) equipment.

Thus far I've made "gelato" with no cream (whole milk and evaporated milk) and no egg whites (the chocolate orange gelato) and with the just enough cream and no egg whites (pine nut honey gelato--recipe below) combinations. Both were very good and rich and intense. But so was the stuff that I've made that I've thought of as "ice cream"-- the lemon, the cinnamon.

What do you think? Is the term "gelato" merely being used to impress and sound sophisticated while "ice cream" sounds more homey and comforting? Does it imply an intensity of flavor that one does not usually get with stuff called "ice cream"? Is is really about the inclusion of egg whites? Or has the two words become synonymous?

While you are thinking about your response to the above questions, might I suggest you have a scoop of Pine nut honey gelato? 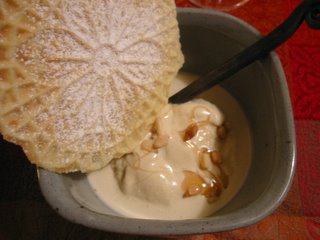 1.5 cups 1% milk (that's what I had in the house so I adjusted the cream quantity accordingly to try and mimic Italian milk fat content)
1 C cream
4 egg yolks
1 C toasted pine nuts (you can get these pre-toasted at Trader Joes if, like me, you have a short attention span and a tendency to burn nuts when you try to toast them)
2/3 C honey
1/4-1/2 t salt
1/2 t vanilla extract

I've always thought of gelato as having a particularly intense flavor and a denser, creamier (for lack of a bettier word) texture than American ice cream. So much of it is about the experience for me, though--the variety of flavors to choose from at the gelateria, the tiny scoops, the walk around the piazza. That said, there is a gelateria in the basement of the National Gallery that I could swear was imported from Florence.

I'll just have to taste yours for myself! Yum.

ooooh! another reason to go to DC! Maybe I'll make it down there when it is spring there and still the dregs of winter here. I might even be able to convice the kids to let me explore the gallery for a little while if there is a gelato bribe involved.

Kate, you might want to look around your house and see if you have a melon ball scooper to use as your gelato scooper - that would be appropriately clever reuse.

nope, don't have one of those either! I don't know that I've ever made melon balls.

We would love to have you out here, Kate!

Hi. Gelato, to my understanding (and I've traveled the world I.S.O. the best) does not contain egg, nor cream... only milk. As well, the "creaminess" is all in the churning and the specific low, but not frozen, temperature at which it is stored and served. It has less air, and is not hard frozen, therefore more creamy. The higher temperature also minimizes the "numbing" of the tastebuds which allows for you to taste the flavors more - which accounts for the "intense" flavor that you can't get with ice cream.

That said, can you adapt your recipe to exclude eggs and cream and just use milk? If so, I'd love to get a copy of it! In the meantime, I'll do a little experimenting on my own. Thanks for the post!!