I suspect that the reason I've been feeling fed up with the adult fiction I've been attempting has nothing to do with the books themselves. I think, at this point in February, I'm simply fed up with being an adult.

So as an attempted antidote, I checked this out of the library: 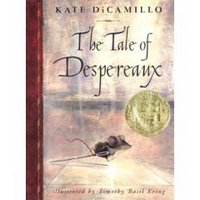 We'll see if this Newbery Award book has the desired effect of taking me back to the many hours I spent as a kid curled up on the couch in the wintertime reading and escaping. I don't have any memory of being bummed out by winter back then, mainly because I lived many of those dark, cold days in imaginary landscapes rather than the one outside my door.

This is the kind of book I should be reading out loud to my kids in the evening (which means the librarian didn't give me a funny look when I checked it out). I've been trying to get them into chapter books, but it is a hard sell for Ian--he'd much rather look at an anatomy textbook or read a book about electricity. The kid is into facts. I suspect Fiona will be a good candidate for this kind of book when she gets a little older since her imagination is always going full steam ahead. Most of the time I have to guess where the hell she thinks she is. Often I am reminded of Claudette, the tiny little secretary of the Department de Pays Anglophone at the University of Bordeaux. She regularly would utter the following phrase after a confusing encounter with one of the spacier of my fellow lecteurs: "Je ne sais pas quelle planete il habite, mais ce n'est pas le meme" (roughly, "I don't know what planet he's living on, but it isn't the same as mine.") That is Fiona in a nutshell.
Posted by Kate at 3:56 PM

I have been reading kids lit lately, too (and I don't have the excuse of having kids!). I thought the Golden Compass by Phillip Pullman was excellent. Eragon by Christopher Paolini was less so. A little trite. Oh well.

BTW, I finally read Eva Moves the Furniture on my flight back from Ireland. It was a good airplane read... except I had to try and hide my sniffles and tears at the ending! Thanks again. :-)

Oh yea! I think Pullman is lit for everyone, despite the fact that the main characters are kids. The next two books in the trilogy are just as good, though they do get wierder and wierder. And I agree totally with you about Eragon. I read it. It was ok, but not memorable. I tried to read the sequel just out of curiosity but it was too dull so I quit.

So glad that "Eva" had the same effect on you that it did on me (weep weep, sneef). I found it a theraputic sort of cry.