Yesterday, I baked a batch of Fimo buttons... 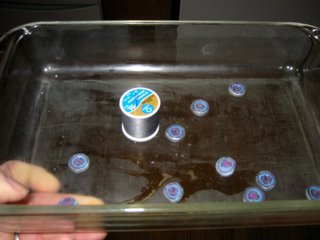 ripped out the failed zipper/awkward hook and eye band on this: 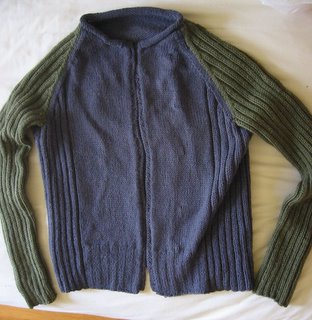 And reknit the band to be wider and with button holes. And I sewed on the buttons: 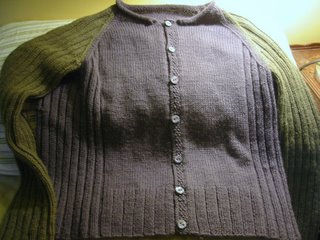 Hopefully this means I will actually start wearing the damn sweater. Yes, I have managed to stretch the shoulders out so I don't feel like someone is grabbing me under the armpits all day long. I don't think the button band looks quite as nice as the zipper version of the sweater but as I am completely incapable of sewing a zipper on a sweater (even after referencing numerous tutorials and on-line photo demos) it'll have to suffice.

On other knitting fronts, I have decided that I hate this sock: 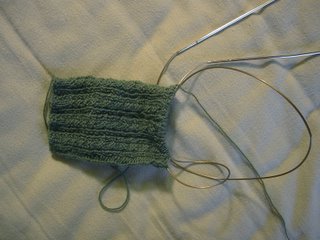 so I ripped it out. Too bumpy and fussy for me. I think I'm in a rippin' mood right now so watchout rippables, here I come!

On a more positive note, I started this: 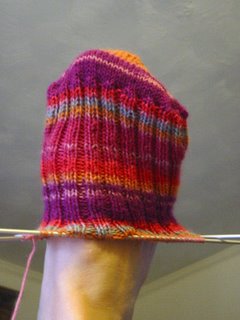 My first toe-up sock knit in the Regia yarn I brought back from Germany. If ever there was a colorway that served as an antidote to winter, this is it. The ridiculous thing is that this yarn comes from a series called "Canadian Colors" where each colorway is named after a different Canadian province. Did you know that Manitoba looks like a tropical sunset? Me neither. I also have the Toronto colorway.

And my feelings about toe-up socks? Neeeeeh. I found the increases on the toe far more awkward than the decreases one would use with top-down. I had read that people liked toe-up because you could try it on at any time and make changes, but the first time I knit this toe (yes, there were a number of attempts before getting it even halfway right) I couldn't tell that I was making a mammoth sock until I had finished all the increases. Then I realized that it might fit a bear paw and had to rip it back (luckily I'm in that rippin' mood, eh?). Unless someone can give me a better sales pitch on the benefits of toe-ups, I'll be a top-down sock maker from now on. Besides,"toe-up" doesn't have much linguistic alure and "top-down" sounds like I'm riding in a red convertible with the sun shining. That's a nice image to have when you are stuck inside because the weather is so cold that it will freeze your snot if you dare to breathe.
Posted by Kate at 8:24 AM

pretty sock! I will have to sick Anne on you - I haven't found the toe-up religion yet, but maybe she can convince you.

You "baked" buttons, seriously? Or is there a joke here I'm not getting?

Oh yea, serious. Fiona and I played with Fimo polymer clay and she made a big multi colored blob and I rolled some more subtle colors together to make buttons. Then you bake them for 15 minutes and ta da! they are hard. Mine are pretty primitive but I still kinda like them.

The new issue of Cooks Illustrated claims pyrex is the best type of pan for cooking buttons...

Well, the things you learn. And I do own some Pyrex. Where does one purchase Fimo?

I got a pack of mixed colors at Michael's craft hell. Price is pretty good if you remember to bring one of the 40% off coupons they often have in the Sunday paper. There are a few hideous colors in the mixed pack (like flourescent yellow...) but they are good to give to Fiona to play with so she doesn't get into the good stuff.

Will that sweater ever end? I swear it has become the bane of your existance! ;)