Ugh and then, the Un-ugh

If, like me, you were tempted to make the Pho recipe in the January issue of Gourmet, do yourself a favor and get the car keys and drive, however far, to a Vietnamese restaurant. If you live too far from any source of Vietnamese food to be able to get there in, say, 2-3 hours, then suck it up and wait until you can visit an appropriate Mecca of Vietnamese cuisine (D.C. sounds good about now or lots of places on the Left Coast) because I am here to tell you that making your own Pho is NOT WORTH THE EFFORT.

(Yes, I know that all caps is the equivalent to shouting at you. I'm in a shoutin' sorta mood this morning, watch out small people and don't piss off mommy.)

I'm not going to go into all the flaws in the recipe and the disappointing result that I served as "dinner" last night because I'd only do that if I thought the recipe could be redeemed with a little tweak here and there. From now on when I crave Pho I'm not going to head for my kitchen, I'm going to get in the car.

On a happier obsession front, my Pho-grumped out mood has been lightened by reading this: 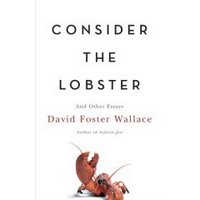 Despite wincing throughout his essay "Authority and American Usage" since I am one of the criminals he is complaining about who may love language but never learned any grammar, (which I suspect is like the scorn I may feel for a person who loves food but who doesn't even know how to make toast) I can't help but love the fervor of his rant and the fact that he uses vocabulary like "euphemism," "corollary," and " rhetorical" side-by-side with the word "wedgie" and the phrase "Molotov-tossing anti-pants radical." I also could not stop thinking of my Blue Pencil friend Deb and what torture daily conversation must be for her (Deb, if you are reading this, you must request this book from the library now). I remember Deb once breathed a sigh of relief when I said "I feel nauseated" rather than "I am nauseous", not because she was happy that my stomach was upset, but because the latter sentence means that I, myself, am the thing that would cause nausea in others. I didn't have any clue what I was saying and I am just as likely to say the latter and unintentionally refer to myself as a pool of green vomit, but clearly Deb's linguistic awareness causes her to suffer expressions of such ridiculousness so often that hearing something expressed correctly is a rare occurrence.

Sometimes Wallace's essays focus on the absurdity of daily life, but thankfully they aren't all irony and witticisms, which can become tiresome. There are some authors who are regularly lumped into the same general category as Wallace but who never, ever drop the corrosive sarcasm. Wallace knows when to employ his wit and when to just be honest and the effect is to make the moments of honesty feel more honest. If you need an example, look at the last sentence of his essay about the twin towers: beautiful, sad and without any irony. I'm not going to quote it here because it really does need the force of the rest of the essay behind it to give it its impact.

So, go get the book. I suspect that you will find at least one essay that resonates with you. And you can also breathe easy knowing that you have in the house the mood antidote for any labor-intensive-yet-completely-disappointing-food-experiment you may have the bad luck to attempt.
Posted by Kate at 7:47 AM

Pho is not that hard to make but takes a couple of times to make sure it tastes good. I think the secret to making quick, good Pho is to use a pressure cooker. I've have an 8L KR PC an use that to cook Pho. It costs me about $10 to $12 to make 10 bowls of Pho where it cost about $8 for only 1 bowl of Pho.

I put together the recipe that I have from 2 blogs (see the links below). The blogs give more details regarding presentation, etc.

This is how I make it with a pressure cooker. It is mainly bring the PC up to high pressure and then letting it naturally release right away. There are several iterations of this.

You can also buy spice packets with all the ingredients in it at Asian markets and you just need to add it to beef broth and you are all done.

To contain the spices, I bought a spice ball from William's sonoma, it works well.

Add onions, spices (put these items in a metal ball or equivalent to contain the
spices), salt, fish sauce, etc to taste.

Bring up to high pressure and allow to naturally release. It's all done and ready to go in about an hour and a half depending on how long it takes your PC to come up to pressure.