Some thoughts on reading and writing 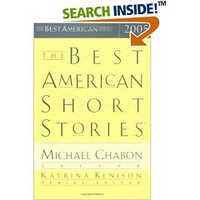 I just finished reading the Best American Short Stories 2005 collection and there are a number of fantastic stories in it. There were three that I absolutely loved. Joyce Carol Oates' story "The Cousins" had me crying by the end of it. I love epistolary stories and this one revealed details about the characters letter by letter in such a heartbreaking way. That sounds trite but I can't think of a better word than "heartbreaking." Kelly Link's "Stone Animals" blended the fantastical and the totally relate-able in a way I haven't experienced before. It wasn't like any of the magical realism I've read before (Rushdie, Marquez) because it didn't feel dreamy at all; most magical realism makes me feel like I'm underwater looking up at a warped world. And my final favorite was J. Robert Lennon's "Eight Pieces for the Left Hand," fragmented prose bits that reflect on each other. I need to get his book of 100 stories Pieces for the Left Hand .

One of my favorite things about all of the "Best of" books in this series is the Contributors' Notes at the end of the book. After reading a story I always go back and read what the author says. Some are brief explanations of where they got the idea for the story, which is fine, but other comments really get at the process of writing.

From this collection my favorite commentary (and I like the story it was associated with, too) was George Saunders' notes about his story "Bohemians". His note is hilarious and insightful and, in my case, completely applicable. Here is his note in its entirety:

I started "Bohemians" in 1994 and got stuck in 1995. There the story sat, stalled at what is now Paragraph 58, through the O.J. case, the rest of the Clinton administration, the Bush election, a change of jobs, the astonishing recession of my hairline, etc., etc., victim of Writer's Error 4A: "Knowing Too Well What You Are Doing." I was sure the story was about The Lack of Relation Between Hardship and Moral Virtue. The story was going to show, rather suavely I hoped, that someone who had Suffered Greatly (Mrs. H.) could actually be a kinder person than someone (Mrs. Poltoi) who had suffered much less! The fact that this idea would be totally obvious to anyone who had ever actually lived in the world did not stop me from periodically brushing off the story, failing, and putting it away again. Finally I noticed that every time I got to Paragraph 8 ("So Mrs. H. told again how she'd stood rapt in her yard...") I got nauseated. It's not uncommon for me to feel nauseated after reading one of my paragraphs, but this was a special kind of nausea, related to how overwritten this paragraph was, how full of a youngish writer's desire to invoke exotica about a part of the world he had never been to. It sounded like Isaac Babel on stupid pills, as if Babel had also taken some dishonesty pills, then decided to write about an Omaha, Nebraska, he had invented in his mind in order to serve a secret moral purpose, then taken some inefficiency polls. Suddenly, after eight years of becoming nauseated after reading this paragraph, a light went on: it wasn't I who was a dishonest posturing braggart, it was the character. And in this way the story came to be about something entirely different from what I thought it had been about all those years, thank God, and could finally be finished.

What Saunders wrote about being nauseated when reading something he'd written and in particular, the reason why ("a youngish writer's desire to invoke exotica about a part of the world he had never been to") is just about the perfect description of how I felt when I went on my writing retreat with Ami and Sarah last autumn and worked on the novel I started, oh let's see, almost 8 years ago! Overwritten? Yup. Dishonest? Yup. Inefficient? Resounding yup. Luckily I have a very strong stomach so reading my own prose didn't put me off the terrific food we had. But it did make me think about chucking the whole damn novel in the trash.

I don't know if a dishonest character will be the key to saving what is decent in what I have already written (though it very well might be--the book is loosely based on a person who wrote 4 autobiographies in which many of the same events are told 4 different ways, so honesty is really not a feature of her character). But at least I'm going to try and face down the nausea to find the thing that will (hopefully) release what is good and help me get rid of what is crap.
Posted by Kate at 8:11 AM

I am at this very moment reading a story that successfully blends the fantastical and the everyday: "A Wedding Story," by Debra Spark, in which the main character finds a pocket-sized rabbi in a chocolate egg, who then lives with her for a few months and gives her life advice.