This is one of those dishes in which half way through preparing it you take a look and think "Damn, I really f***ed up this time. That is so ugly I wouldn't feed it to my dog."

But sometimes ugly food tastes really good, and this pork loin cooked in milk, Arista al Latte, looks a lot worse while cooking than when it finally comes to the table. It will never win any awards for its looks, but the finished product isn't so ugly as to make anyone flee. And once people taste it, trust me, they'll stay and they'll probably ask for seconds.

Another major benefit--it is easy! The gist of the recipe is take a pork loin, cut little slits in it, stuff garlic, strips of lemon zest and some fresh rosemary in the slits, brown it in a saucepan with a little olive oil, then dump some milk over it. The pork poaches in the milk (which keeps the pork tender). The lemon zest makes the milk curdle and the curdled milk cooks down into caramelized curds which, I grant you don't sound too pretty (and aren't) but which make a great sauce.

Here is a step by step photo essay of the process: 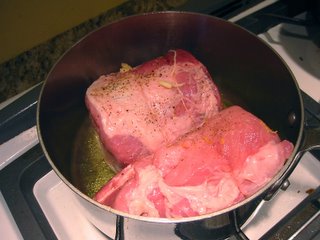 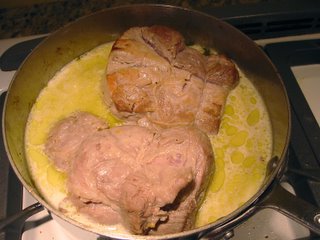 Dump quite a lot of milk over the pork loin (about 1 C per pound of pork) and cook for at least 1.5 hours with the lid OFF. The milk will evaporate leaving some curds like this: 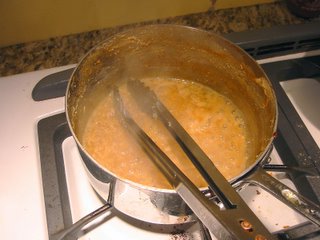 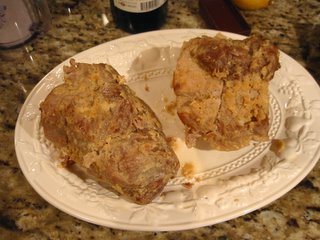 Wow, that is some ugly pork, but once it is sliced... 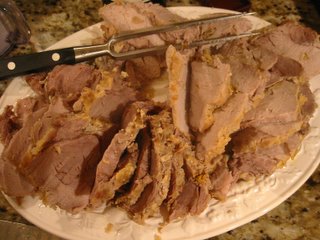 it doesn't look quite so bad. 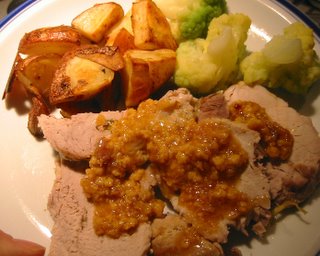 And when you top it with some of the caramelized, garlicy curd-sauce and put it on a plate with some roast potatoes and broccoflower, it looks decent enough. And trust me, it tastes terrific.

1.5 lbs boneless pork loin
zest of one lemon (not microplaned--in strips)
sprig of rosemary, leaves stripped off of twig
2 cloves of garlic, sliced lengthwise into slivers
1.5 C milk (whole is preferable, but I made it with 2% and it turned out fine)
2 T olive oil
salt and pepper

Cut slits in the ends and along the grain of the pork and slip in bits of the garlic, lemon zest and rosemary. Sprinkle with some ground pepper and a little bit of salt (yes, for once I am recommending you go light on the salt. At least till the end. When you cook the milk down it concentrates the flavor and you risk making it way too salty so go light now and you can always add some more at the end.)

At this point, if you want, you can use cotton twine to tie the meat into a more roll-like shape (I've done it both ways and it does look a teeny bit nicer rolled up, but I'm not sure it is worth the extra hassle of wrestling with the meat).

Heat the oil in a saucepan big enough to fit your pork loin but not too big (otherwise the liquid won't rise high enough on the pork for it to poach and stay moist). Brown the pork on all sides, then pour the hot milk over it.

Heat the milk to a boil, then reduce heat and simmer uncovered until the pork is done (1-1.5 hours) turning it occasionally and scraping the bottom of the pot to keep the curds from sticking too badly.

By the time the pork is done, most of the liquid should have evaporated. If the curds still look a little watery, take the pork out, slice it thin (take off the string first, if you used it) and raise the heat under the curds to get the curd sauce to a thick enough (but not too thick) viscosity. Keep stirring so the curds don't scorch. Taste the curds now and see if you want a little more salt.

Serve slices of the pork topped with some of the curds. And if you think it still looks ugly, shut your eyes and take a bite.
Posted by Kate at 10:11 AM