The loaf of meat

The main reason I have never made meatloaf is this: 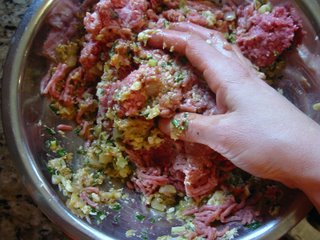 Gross.
I'm ok when it comes to nasty kitchen tasks when the payoff is worth it, but up until two weeks ago, I had never tasted a meatloaf that justified the gross-out factor of sinking one's hands up to the wrist in squishy meat. The few meatloaves I had tasted were dried out, tasteless hamburger-like constructions. They could have been sawdust loaf for all the good the meat did in the recipe.

All that changed at my book group (a.k.a monthly excuse for gluttony) meeting. We read Empire Falls (terrific book, amazing how Russo manages to incorporate so many depressing subjects into a book that is not at all depressing--and the HBO film version is good, too.) Since a diner figures prominently in the book, the menu was: meatloaf, mashed potatoes, greens, Mexican-ish salad (the kind you might find at a diner), squash casserole, root beer floats and lemon meringue pie. I tell you, we reading women love to eat!

Once again I neglected to bring my camera which is too bad because I would have liked a photo of my transformative meatloaf moment. Halla made a terrific meatloaf from Cook's Illustrated and suddenly sinking ones hands into a bowl of meat gloop didn't seem so gross. Her meatloaf was moist, rich and had a spicy glaze. It wasn't some lame-ass hamburger loaf, but an entity unto itself.

It was so good that last Saturday I decided to clean out the freezer and try my hand at making one my own. I found a half pound of ground turkey thighs and a half pound of ground pork lurking in the back of the freezer so I used them as a substitute for one of the two pounds of ground beef that Cook's calls for. The two lighter meats meant that my meatloaf wasn't as dark and rich as Halla's but it was still plenty flavorful.

After doing the gross meat squishy part, I patted it into a loaf (according to Cook's you want the fat to be able to drain away, so no loaf pan) on a foil covered broiler pan with holes punched in the foil. It went into the oven looking quite tidy: 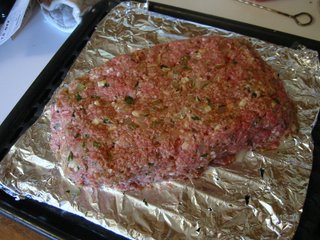 But did not emerge looking too pretty.... 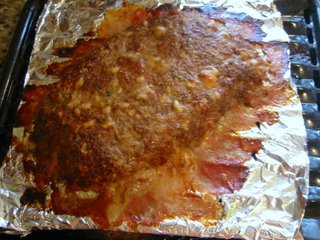 Christ, that looks like something from one of my nightmares.
Some of that ooze in the above picture is the cheese (yes, the recipe has cheese because we all know there isn't enough fat in meat alone...) which seeped out and some of it was just plain meat fat. But you know what? You don't make meatloaf for its looks. After scraping away some of that ooze and putting the tomato gunk on top and broiling it, it was perfectly presentable to be served it on a plate with its dinner brethren--smashed potatoes (lazy person's mashed), broccoli and some greens: 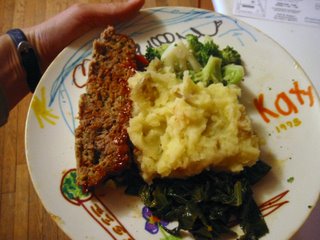 Vintage-style food on a vintage plate--meatloaf really should be eaten off of melamine and this plate boasts my own original artwork circa 1973.
Sarah and Brian and Nicholaus came over to help us conquer the massive loaf of meat and Nicholaus gave it his approval by thoroughly neglecting his broccoli (he's usually a broccoli kinda guy) and having two servings of the loafy meatiness. Then again, we also have a theory that he and Fiona did some kind of weird-ass three-year-old personality switch for the duration of the meal since she gobbled down her broccoli and neglected her meat (and she's usually a meaty kinda gal). We convinced Ian that meatloaf was "a ketchup lover's dream food" and after his usual kvetching he went along with it, particularly with the outright bribe that if he ate it, he'd get some of the fantastic Stroh's Lemon Custard ice cream that the Royal-Pinks brought over with them. (Haven't had Lemon Custard you say? Next time you head to Washtenaw Dairy for a massive scoop of ice cream pass up the chocolate varieties with tons of chunks of stuff in it and go for the purity of the Lemon Custard--believe me, it is fantastic, even for a chocolate lover. Or you can hit Krogers and bring home an entire half gallon of Lemon Custard and stuff yourself silly.)

It is a little late in the season to have discovered a good cold-winter meal, but I do have faith that Michigan isn't going to all of a sudden become weather-friendly and Spring-like. I'm sure it'll throw at least another day or two of surprise snow at us and if it does, I'm ready with the meaty antidote for dinner!

1. Heat oven to 375 degrees. Spread cheese on plate and place in freezer until ready to use. Prepare baking sheet--cover a broiler pan or a cookie cooling rack with two layers of foil and punch holes in it so fat can drain. Then put pan or rack in another pan to catch drips and prevent your oven from smoking you out of the house.

2. Heat butter in a skillet over medium-high heat, add onion and celery and cook, stirring occasionally, until beginning to brown. Add garlic, and paprika and cook, stirring, until fragrant, about 1 minute. Transfer mixture to small bowl and set aside to cool.

4. While meat loaf cooks, combine ingredients for glaze in small saucepan; bring to simmer over medium heat and cook, stirring, until thick and syrupy, about 5 minutes. Spread half of glaze evenly over cooked meat loaf with rubber spatula; place under broiler and cook until glaze bubbles and begins to brown at edges, about 5 minutes. Remove meat loaf from oven and spread evenly with remaining glaze; place back under broiler and cook until glaze is again bubbling and beginning to brown, about 5 minutes more. Let meat loaf cool about 20 minutes before slicing.
Posted by Kate at 9:22 AM

Thanks for the very satisfying laugh-out-loud post, Kate. Your photo captions are hilarious. But dude, why tell us the plate is circa 1974 when we can plainly see your neatly handwritten 1973 (or is it 1975) right there on the plate?

Aggg! Clearly I still can't read my own handwriting...Yup, you are correct it says 1973--not bad for a 4 year old!

I love, love, love meatloaf. I am going to try this recipe the next time I make it. And Lemon Custard sounds divine, but alas, I have been boycotting Washtenaw Dairy for ten years. I am incredibly petty.

Kate, you're making this vegetarian's mouth water. Here in the parallel universe last week, we made the fake meatloaf from Laurel's Kitchen, which I think is the same vintage as your 1973 plate). It's mostly lentils and walnuts and is fairly convincing, for those who like that sort of vegetarian cuisine. We cook it because every once in a while we want some Middle American comfort food that - here's that parallel universe again - we can put lots of ketchup on. We had baked potatoes (too lazy to mash them) and green beans, right from Trader Joe's freezer.

Wow, does that sound good! I always hated meatloaf until I discovered the trick of adding pesto -- I think that's from the Silver Palate cookbook. 2 or 3 Tbs pesto per pound of meat, I believe.

Nixie -- why are you boycotting Washtenaw Dairy????

I am totally going to try this one! I wonder if I could crochet or knit a meatloaf and do it justice???

Ooh, thanks for sharing. That sounds so good! It's amazing how not cooking it in a loaf pan makes it seem like a different dish entirely.