In an attempt to appeal to my incredible picky eater son, we have been having food-theme days. I try not to bitch too much about my kid's general suspicion and dislike for most foods since I figure this is my cosmic payback for my regular sin of gluttony. But I also can't just stand by while he passes up the pleasures of many a fine kid-friendly food (I'm not crazy enough to, say, plan on having "Mackerel Day!") So I've had to get a little creative.

Last week we had Corn Day and the end result was that Ian discovered he loves corn on the cob! I know, corn is only barely a vegetable (actually it is a grass...) but we are working on versatility more than just nutrition. To get to this point required a good deal of extra work on my behalf.

First we had to dig through the house and find as many directly corn-based foods. (I'm reading The Omnivore's Dilemma right now and the first section describes how Americans are corn people since pretty much every meat and processed food we eat is dependent on some corn based product. But for the purpose of Corn Day, I thought we'd stick to the recognizable ones.) We found canned corn, corn chips, corn meal, crunchy dried corn, frozen corn and some fresh corn on the cob that he helped me pick out the day before at the store.

Since my picky eater is also a reluctant writer (though not a reluctant reader, thank god), we did some corn-themed writing practice. He wrote "Today is Corn Day" and other such relevant sentences. He drew a picture of some corn in a bowl. We sampled some corn products throughout the day, but the culmination (and great success) came at night.

We took our corn on the cob out on the deck to shuck it. The kids helped pull the husks and silk off of the cobs and then before attempting the eating portion of the evening, we made a Native American-style corn husk doll. 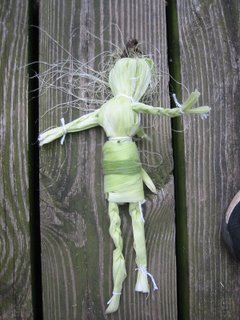 (Instructions here; one is supposed to used dried corn husks rather than fresh because by the next day our doll had dried a bit and was pretty loose limbed. But making the doll with the husks of the corn they just shucked themselves holds a pretty big appeal for the small people).

Here she is in the hands of the gentler child: 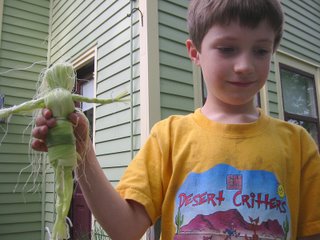 After Fiona got hold of her she lost a lot of her corn-silk hair and her arms were yanked from side to side until they were dramatically different lengths. 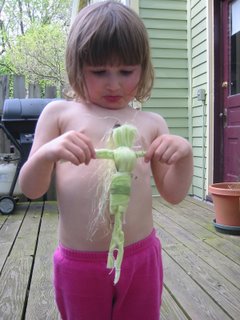 Doll dismemberment in progress...
I proposed to take the shucked corn inside and give it a quick boil to cook it. But the kids decided that before I cooked it they should see what it tastes like raw. Ian took a tentative little bite: 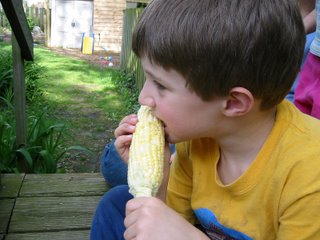 and declared it delicious! Fiona was much more energetic in her corn attack. Here she is getting some good leverage on the cob: 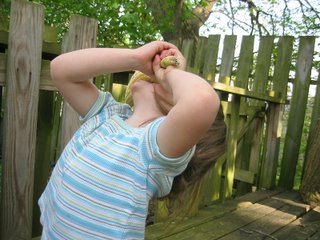 and here is the end of that bite: 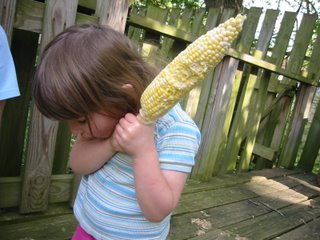 I think she has a future in baseball if we practice on enough corn cobs.

Both were eating the raw corn so enthusiastically that I couldn't pry it out of their paws to cook it. And since it seemed like a waste to boil water for just my cob, we all sat outside and ate it raw. It was surprisingly good corn for this time of year--a little starchy due to the raw state, but very, very sweet. The next day we tried cooked corn on the cob and they liked that too.

Now I'm wracking my brains about what other food "themed" day (or days) we can come up with. I'm thinking that a pea week would be good--I've planted my peas in my garden and when they are close to being ready to pick we could do a week of pea themed activities. Since Ian is so into science, I thought we could read about Gregor Mendel's principles of genetics that he figured out with pea plants. Ian has already been asking about dominant and recessive traits (why he has blue eyes and Fiona has brown, for example) so this could appeal to him. We could also do some seed sprouting so he can watch the seed turn into a plant. Whether this will actually get him to eat a fresh pea is questionable, but I'm sure as hell hoping that making the food theme into more than just eating will help.

Now, anyone have ideas of things I can do with strawberries?
Posted by Kate at 6:34 AM

This is a hilarious (the thought of three of you eating raw corn) and inspiring post! I love the corn doll, too--I don't think I've ever seen a cornhusk doll wearing a miniskirt. Love it.

If you haven't already seen these, you must check out Food For Thought and How Are You Peeling? both by Elferrs & Freymann. Maybe you could recreate some of these characters with your kids... and then eat them! (the food, not the kids)

Regarding strawberries: I made some great strawberry sorbet, which might be fun for the little ones. I got the recipe from epicurious, I believe. It's very simple, but you have to stir it once an hour for something like six hours. And it tastes better if it's taken out of the freezer quite a while (like 45 minutes) before eating.

Maybe you could do a tomato day? Everything from ketchup to sundried tomatoes to grape tomatoes?