My old high-school friend Scott asked for a little advice about purchasing a kitchen gadget for his wife (well, for his kids to give his wife for Mother's Day--three kids, three gadgets, lucky woman) and since I lost his e-mail address somehow (I thought my e-mail program automatically copied addressees into my contacts list but apparently not...Oops) and figure there may be some other folks looking to please a kitchen-gadget obsessed woman on Sunday May 16th, here are a few recommendations.

These are pretty simple things, folks. I have plenty of stuff that takes up a lot of room in the kitchen and gets used once or twice a year.

Here are some of my favorites: 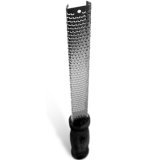 A Microplane zester. These are the best citrus zesters/nutmeg graters/Parmesan cheese shredders bar none. The Parmesan in particular ends up so fine and light it is like eating Parmesan clouds.

Make sure you get the one with the handle. As the blade easily removes the top most layer of skin of a lemon, so it will remove the top most layer of skin of a human. And if you plan to have your toddler present this to the fortunate woman (seeing a lethal object in the hands of a baby is always a fine way to get mom's attention) wrap the blade part for God's sake and make sure she knows to unwrap it carefully! Mother's Day + Emergency Room = No Fun 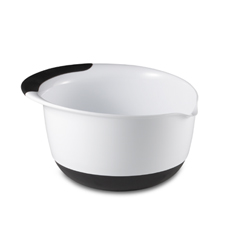 An Oxo Mixing bowl. I know, you already have mixing bowls. I have two stainless steel, and a set of those fun glass ones that fit inside each other and range in volume from about a tablespoon to big enough to bathe a reasonable sized infant. And I use them all. But last year I went out and bought myself one of these bowls for two reasons: 1) It has a spout and as I was (and still am) obsessed with making ice cream I was having a hell of a time transferring custard from the bowl into the small freezer canister of the ice cream maker. Much of the custard would end up on the counter or trickling down the sides of the canister and much swearing would ensue. This bowl's diminutive spout makes it a piece of cake. 2) It has a rubber bottom (sounds kind of kinky--yes?) and a handle which makes this the bowl I reach for when I cook with the kids. Three year olds are very good at stirring. They stir so well that sometimes the bowl flies off the counter. We have a much better chance of having the ingredients stay in the vicinity of the countertop if I use this bowl. 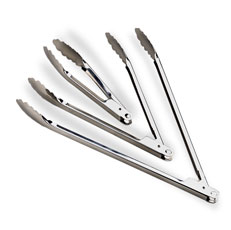 Tongs. You can never have too many pairs of tongs. I am a particular fan of these Robinson self-locking tongs since they only take one hand to release the lock (some tongs require the hand not holding the tongs to reach over and press or pull something to unlock them--usually when I use tongs, my other hand is occupied holding a platter, or on good days, a glass of wine). I only have one pair and since Brian doesn't read this blog (probably to protect his sanity since he may already suspect he married a nut-case and doesn't want further proof) I'm going to have to hint heavily that I need another pair of tongs for Mother's Day. My method will probably involve the use of tongs as a pinching tool to get his attention. I use my tongs pretty much every day and often have to wash them three or four times just to make one meal (after you have used them to, say, put raw chicken on the grill DON'T FOR GOD'S SAKE use them to stack the corn on the cob on a platter without washing them in between! Or buy two or more pairs and save yourself the hassle.) 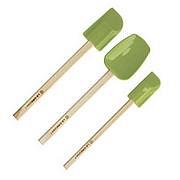 Silicon spatulas. Do you remember the white rubber spatulas of your youth? Man, did they taste nasty. As a child devoted to licking out the bowl after my mom had made cake or cookie batter I have a real hatred of those damn spatulas. You'd get a lovely lick of say, lemon cake batter, and then the taste of nasty rubber would come through and ruin it. I am happy to say that my children need not suffer the hardships that I endured (cue violins). Silicon spatulas are terrific. The examples pictured at left are by Le Creuset and are reasonably priced and so cheerful in kiwi-green, but it seems everyone makes them these days. In addition to no nasty taste, these spatulas can be used to stir stuff on the stove since they can take heat up to something like 600 degrees. That makes them very useful for getting into the corners of pans (where a wood spoon can't reach) and keeping sauces or custard from sticking.

Here's to hoping that these 4 suggestions are useful--if you happen to already own all of the above, allow me to complement you on your good taste! Or drop me a line and I can always come up with a second tier of fun and/or useful gadgets to recommend (does mom like beer? Get her a Homer Simpson talking beer bottle opener!)
Posted by Kate at 7:11 AM

Hooray! I own them all (despite the fact that I cook only the most basic of meals)! We especially love the rubber bottom mixing bowl--good for mixing and pouring pancake batter, too.

Oh, I'm afraid that mixing bowl is calling my name. (Lou, do you read this? Lou?) (And whaddya mean Brian doesn't read your blog?) We love love love our Microplaner. And a second (or third) pair of tongs would come in handy for the daily bacon-makin' that goes on in our house now for a certain small person.

Thanks! Went with the tongs - plan to only use them in the kitchen though.

I can chuck the lot as long as I have a really good knife.