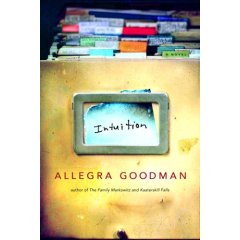 I recently finished Allegra Goodman's newest novel, Intuition. I can't quite figure out what it was about the book that made me feel a degree of reserve while reading it. I've read and enjoyed two of her other novels, Kaaterskill Falls, and The Family Markowitz, but I found that the character in this novel about whom I was supposed to care the most, a research scientist named Marion, was a void. I think she was supposed to be the ethical center of a novel that has to do with the politics of scientific research but by the end of the book I still could not picture the woman.

Marion is supposed to love research and two other pivotal characters, Cliff and Robin, come to the realization that the process of research is what they love, rather than the thrill of important results. But despite three characters professing this love, all I felt about the time spent in their laboratory was tedium. It has been a number of years since I spent time with experimental mice, but this did not make me want to rush back to that world.

Time for a big digression here: the year after I graduated from undergrad with a degree in English, the only job I could find was working in a lab out in Berkeley that was doing quality assurance potency testing of the Botulism toxin (why they hired me, I'll never know). We got FDA approval while I was there, which meant counting a hell of a lot of mouse bodies on my part to know the kill-rate of different toxicities. Then I got to use regression analysis and graph each batch. Eventually this toxin was used to help people with eye spasms who were effectively blind and the toxin would paralyze the spasming muscles. It also has been used on people like radio host Diane Rehm whose vocal style is the result of spasms in her vocal chords. But hey, why stop with fluttering eyelids and vocal chords? Right before I left to go back to grad school the wee little company headed by a doctor not entirely unlike the character of Sandy in this book (charismatic, good hearted, rich as shit with the annual staff picnic held at his winery in Napa), was sold to Allergan and TA DA they marketed it as Botox. So if you are curious why say, Nicole Kidman has no facial expression any more, well, thanks in part to my injecting mice in the butt with botulism, she has paralyzed her wrinkle-causing facial muscles.

Ok enough of the Botox primer, back to the book. Goodman has said that the book is about belief and I can see this being nicely developed between the different characters' desires. Cliff wants to believe he can cure breast cancer and thus disregards his faulty data, Robin doesn't believe that Cliff is capable of such a discovery. Kate wants to believe that Cliff is the heroic scientist. And there is a layer of Judaic belief (and doubt) expressed by many of the characters. That's all well and good, but rather than having this exploration of the desire to believe be the focus, I felt that the book turned into a "did he or didn't he" fake his data question? And I just didn't think that question was so interesting--either he did or he didn't but unfortunately I didn't care enough about any of the characters to worry about the repercussions. Don't you really need to care if Marion's lab will come crashing down if it turns out Cliff fudged his data? Most of the people in the lab were so miserable that it felt like more of a blessing when much of it dissolved. Do I think this is the happy ending that Goodman intended? Beats the hell out of me.

And the title--it really comes down to the two main women characters, Marion and Robin, suspecting the men of either intentional or unintentional wrongdoing. I couldn't help thinking that maybe I would care more about their intuition if it wasn't about data.

I can see a lot of what Goodman was trying to do, and this is still a much better written book that many I've read, but did it make scientific research a compelling subject for a non-scientist? I can only say, not for me.
Posted by Kate at 4:20 AM

So you're to blame for Botox. That's awesome. Between collagen injections and botox, so many people walk around with stretched, puffy faces that look like they are about to explode. Ewwww.

I saw a woman at Whole Foods last week that must have had every known medical, age defying procedure done to her. A walking Frankenstein of un-natural procedures topped off with a strong dose of makeup. Thank goodness she was staying healthy by eating organic though...

I need a mother's day gift idea that is kitchen related - figured you'd be a good person to ask. My instructions are that she wants a omelete maker and a potato masher. Not exciting, I know, but we've been married a while. Problem is, I have three boys, each boy wants to give her a gift. So I need a #3 offering of roughly the same significance. What's your favorite kitchen gadget(s) that you end up using regularly - as opposed to those that look cool in the store, but just never end up making into the regular rotation?