It is pretty clear that Summer and the resulting mellowness of brain is here because I am utterly charmed by this series of mystery books: 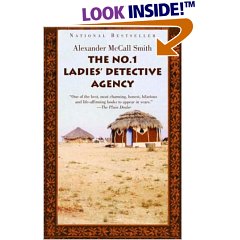 I'm sure I'd like these in the wintertime too, but they really are the perfect Summer read--lovely characters, episodic writing (so you can put it down, rescue the kid who is dangling precipitously from the climbing wall your husband built in the back yard, and get back into the story without any necessary re-reading), and yet not fluff. There are numerous meditations on significant issues, from morality, to economics, to AIDS. And though it may sound foolish, I feel like I'm getting to know Botswana from the perspective of the three main characters. Mma Ramotswe's pride and love of her country is utterly convincing and is a refreshing break from the usual "superiority" of the West perspective in which I usually encounter any writing about Africa.

Here's a sample of the extremely gentle humor in favorite paragraph from The Full Cupboard of Life, number 5 in the series:

Mma Makutsi, sitting at her desk, looked down at her shoes, as she often did in moments of crisis; her shoes, always her allies, but now so unhelpfully mute, as if to convey: don't look at us, we said nothing. You were the one, Boss. (In her mind, her shoes always addressed her as Boss, as the apprentices addressed Mr J.L.B. Matekoni. This was right for shoes, which should know their place.)

Isn't that a lovely little interlude that shows how many of us look to inanimate objects to support our decision making processes and lend us emotional support? My toaster has the ability to calm me down when I'm having a lousy day--after putting in a piece of bread, I know that I have to stop and pause for a short period, just breathe a little while a mundane piece of bread is being transformed into the culinary glory of a good piece of toast. I swear, the support I've received from my toaster is not one to disregard and it is nice to know that Mma Makutsi's shoes serve a similar purpose for her.

I'm enjoying this mystery series much more than the contemporary "literature" novels I've recently read, among them: 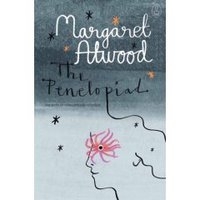 Margaret Atwood's The Penelopiad and 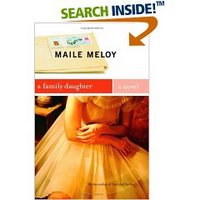 I'm a bit surprised at my lukewarm response to the Atwood since her project with the book is something I normally love--retelling a familiar tale from a different perspective. In this case, she tells the story of Odysseus from Penelope's view of the wife left behind and the story is told with Atwood's trademark acidic wit. This Penelope is no sweet, obedient, loyal wife, but a keen thinker who has to strategize in order to survive. And I think Atwood's project is generally successful, but for once, I found the harsh humor a bit tiring; I wish there had been more moments of vulnerability, like the ones that briefly appear between Penelope and her maids who she enlists as her spies but which are hung by Odysseus when he returns as co-conspirators with the suitors. Her guilt and tenderness towards the maids is compelling reading, but keeps being buried under the next round of caustic commentary.
Maile Meloy's new novel is a follow up with a twist to her first novel Liars and Saints. In this novel, the main character is Abby who, in a sort of book-within-a-book reference, turns out to be the "author" of Liars and Saints; that is to say, we are to read A Family Daughter as the "truth" of the family events behind those told in Liars and Saints. I thought this was clever at first, but after a while the concept lost its novelty. By the end of the book there were too many characters packed in to keep track of (I kept forgetting the names of Abby's cousins which makes you wonder exactly what purpose they fill in the story other than adding bulk to the clan) and some of the characters had taken on charicature-like qualities. I found myself skimming the passages that were about Clarissa (Abby's mother) because they were so predictable and trite. Ultimately, I thought the book started out well but lost steam and petered out to something I was relieved to have finished, rather than regretful that it had ended.

So I'm off to the library in the next day or so to pick up In the Company of Cheerful Ladies and to continue my friendship with Mma Ramotswe, Mma Makutsi and Mr J.L.B. Matekoni, my new summer pals.
Posted by Kate at 7:52 AM

I agree with your assessment of The No. 1 Ladie's Detective Agency series. I have found them gentle and charming. These are not terms that often come to mind when thinking about a mystery series. I too,often recommend them to those needing a soothing, yet substantive read.

I also liked the No. 1 Ladies (where does the possessive apostrophe go, if there is one? I'm too lazy to look it up and can't see the image on your blog)--this post makes me think I should put holds on the rest of the series! And, you are far more generous to Atwood and the Penelopiad than I am. I had such a strong negative reaction to that book.

I LOVE the No. 1 Ladies! Gentle and charming describes them perfectly. I have been drinking bush tea ever since -- the Michigan grocery store version, anyway.

Your description of the Atwood novel brought to mind - well almost! - another contemporary portrayal of the Odysseus/Penelope relationship. I can't quite remember the author, but I think it's Sara Maitland, who also wrote some of my favorite novels, Daughters of Jerusalem, Three Times Table, and Virgin Territory. I searched online very quickly and think the story might be "Siren Song" from Maitland's collection Angel Maker, but I could easily be wrong. If it's not Maitland's story, it might be by Zoe Fairbairn or one of the other group of early 1980's British feminist writers. Anyway, the story is another one from Penelope's perspective, both before and after Odysseus' return; when I read it, I remembered thinking that it was a story about relationships between equals: obviously, I liked it!

Interestingly, in trying to find this story just now, I ran across a number of other Odysseus/Penelope retellings:


Odysseus on the Rhine, by Edward S. Louis. According to Amazon, in this book Odysseus, after the end of the war and Penelope's death, heads north on one last voyage: "His trip up the Rhine to the new kingdom of the Trojans is also a time for reflection on his life and the events that have shaped him, and made him into the warrior and man that he is. "

"Return to Zion," by Tamar Yellin in Kafka in Brontëland: "a narrator named Telemachus describes the history of his parents, Penelope and Odysseus (“and many acknowledge this is a strange name for a Jew”)." More at The Online Jewish Book Community

"From the Found Notebooks of the Members of the Homer's Writing Group", by Sean Carman, in McSweeney's: "Another solid story from the group's most prolific member! And we'd barely finished workshopping the Iliad! A lot going on here that I like."


Hope you don't mind the long comment - your post really inspired me, and now I'm going to have to read all these things I found.
-deb

I adore the No. 1 Ladies' Detective Agency books. They are a delight to read.