It's a good thing that comp grading is over for the near future and I finished my canoeing piece for the Community Observer because, people, I got some reading to do! There are times when I feel I make no progress on my reserve list at the AADL. One of the nifty new things about their website is they let you know where you stand in the queue for a book; right now I happen to be # 16 of 22 requests for Monica Ali's new book, Alentejo Blue (yes, I put in a request for it despite the fact that I didn't like or finish her other book, Brick Lane...This one sounds kind of promising).

For some reason, I hit the jackpot in the last week on the reserve lists and received numerous e-mails telling me to hightail it to the library to pick up a ton of books.

First we have the three books that I have already started: 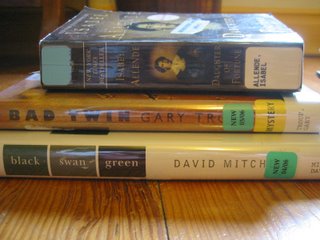 From Top: Daughter of Fortune by Isabel Allende (about 100 pages left, so-so read but not so bad that abandonment is immanent), Bad Twin by Gary Troup (about 50 pages left, a trashy gimmick novel tied to the TV series "Lost") and Black Swan Green by David Mitchell (only just finished the first chapter but looks very promising)
Then we have the four books that might soon be making me even more of a book polygamist: 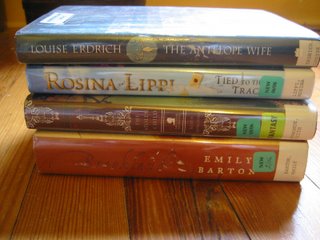 From top: The Antelope Wife by Louise Erdrich (next book group book), Tied to the Tracks by Rosina Lippi (whose Homestead is on my Top 10 favorite books), The Stolen Child by Keith Donohue (ok it has been publicized up the yin yang, but I like the subject matter) and Brookland by Emily Barton (which sounds like my kind of historical novel).

and the four books that are a part of a a little Michael Chabon crush I'm having since finishing (and raving about) The Final Solution: 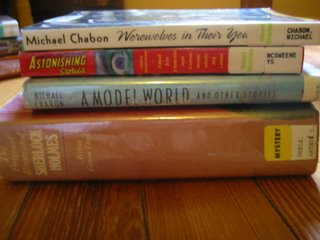 Werewolves in Their Youth (by Chabon), McSweeny's Enchanted Chamber of Astonishing Stories (which Chabon edited), A Model World (by Chabon) and The Classic Illustrated Sherlock Holmes (to try and tap into Chabon's thoughts and why he wrote The Final Solution)

And don't forget the two books that wait for my continued reading of young adult fiction which has been encouraged of late by how much I loved reading Fly by Night: 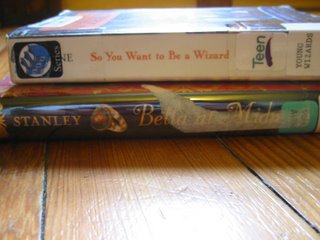 So You Want to Be a Wizard by Diane Duane (recommended on some blog recently, wish I could remember which one...) and Bella at Midnight by Diane Stanley (which A Fuse #8 Production--she who led me to Fly By Night--gave a very good review)

I ask you, why does the bounty of books descend upon me in the midst of decent weather and in prime produce season (which means I must spend some time away from my beloved couch being outside so I don't get seasonal depression in the middle of the summer, and, when inside, preparing numerous fruit pies and freezing enough pesto to get me through another winter....)?

What! No food books?
Books on your MP3 player for both gardening & cooking - then you can only barely hear the kids fighting.

I bet you can guess what I'd suggest.

Kate, I quoted you over on superpatron as part of a suggestion that libraries do netflix-style hold queues - for when you really want to ration yourself to 10 or 20 books out at a time and don't want all your holds delivered at once.

Kate, we really want to offer netflix-style borrowing, but library circulation software is just not even close yet. However, we've got some ideas (and being able to freeze your hold is coming, which will help).. so don't give up hope. We'll get there.