Book group met on Tuesday evening and this time I remembered to wear shorts with a very loose waist band. An excellent piece of foresight since the evening quickly turned into our usual Gluttony Fest.

We read Louise Erdrich's The Antelope Wife which, I think we all agreed, was not one of her best; definitely not in the class of The Last Report on the Miracles at Little No Horse. The story was very fragmented and while Erdrich often shows what tangled family lines are all about, this one felt both more tangled and less subtle than the others. I felt like I was being beaten over the head with family disfunction and intermarriage. It didn't help that I had a first edition copy which did not have a family tree included--clearly the editors received some feedback about this omission and its use-value for readers because the family tree appears in all the subsequent editions of the book.

We were a bit loose with the food connections to the book with the great exception of Ami and Sarah's contribution (noted below).

I brought an aperitif and canapes consisting of Bellini's made with a puree of local red haven peaches and prosecco sparkling wine. The canapes were a terrific (and really easy) assemblage of baguette topped with smoked trout and then blopped with a sauce made of creme fraiche, mayo, lemon, chives and dill (recipe at the end of this post). 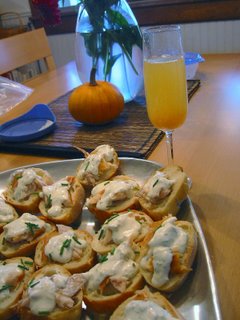 While sipping and nibbling, we watched Ami make frybread (which was mentioned numerous times in the book). Here you see Ami demonstrating the many uses of the spirit hole that is punched in the center of each piece of dough: 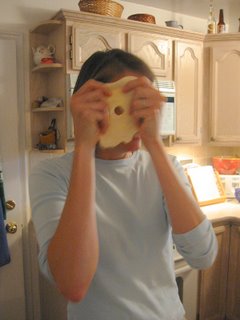 Some of the frybread (cooked in pure Lard! Yum!) were popped into a bag with cinnamon and sugar and shaken until coated. The others were sprinkled with salt. Both were damn good. In this photo you can see Halla's nicely manicured fingers making a grab for one. 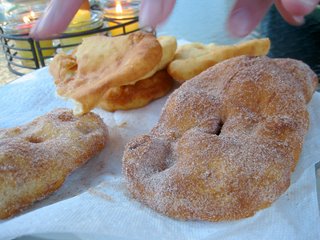 For the main course, Marilyn shared the bounty of her glorious garden with us in a potato, corn, roasted chile chowder (gotta get that recipe). The corn was so sweet and still a little crisp and the chile gave it a nice kick. 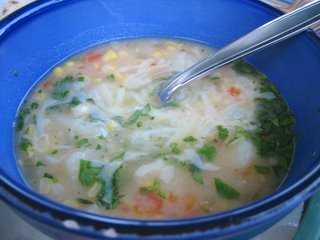 And then there was the overladen plate to go with the chowder. From top and then proceeding clockwise around the plate you see: Halla's cheesy and meltingly tender summer squash dish, Meg's garlicy tequila shrimp, a varied summer fruit salad provided by Diane, some of Marilyn's roasted beets (if she didn't provide them, I probably would have snuck away from the table and been found in the garden eating them raw with dirt smears all over my face, so thanks Marilyn, for accomodating my beet fixation!), and a pasta salad she made with the beet greens, dried cherries and Parmesan, and a salad that Lea brought with toasted pine nuts and sliced pears. Whew! 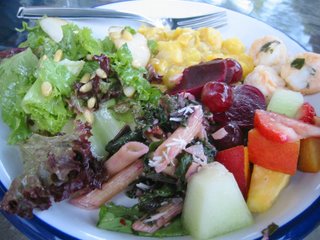 It was incredibly tempting to go back and get seconds on some of these fantastic dishes, but already I was feeling rotund in the belly region and I knew we still had dessert to contend with, so I stayed put and had another glass of wine instead!

Sarah made a blitzkuchen--a cake which is prominent in the book--and I brought along a quart of raspberries that we picked at Makielski's the other day. Thankfully the cake wasn't over the top rich--Sarah's inspired addition of lemon zest brightened the cake and helped it to not sink beneath the medly of complex flavors that preceded it. 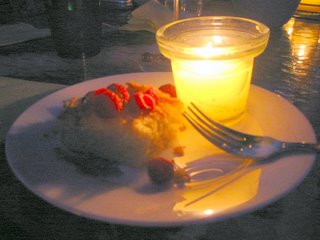 No, we didn't serve it with a candle on the plate; by desert time it was pretty dark and we were eating outside so votive lighting by Marilyn-the-pyromaniac was the way to go.

The next book around which the glutton-group will assemble is:
Alexandra Fuller's Don't Let's Go to the Dogs Tonight: An African Childhood

i love reading your food posts! (so does my boyfriend because i then go on a cooking your recipes spree :)

do you have a good recipe for frybread? i'm drooling on my keyboard here!

I'll see where Ami got the recipe because her fry bread sure was good!