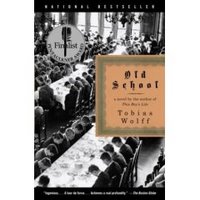 I have to thank Ami for recomending the Tobias Wolff novel Old School.

The book passes through so many moods. In the first chapters, the narrator lays out the atmosphere of his boarding school in the early 1960's and shows us how the boys with literary aspiration mimic their favorite writers. There is a fantastic conscious parody of Hemingway: "Today is the day of meatloaf. The meatloaf is swell. It is swell but when it is gone the not-having meatloaf will be tragic and the meatloaf man will not come anymore." It made me laugh so hard I risked inhaling my coffee.

Then the book shifts into a different section, much more about self-discovery than about the institution, and how a competition reveals what kind of men the boys will likely grow up to be. There is a culminating event (which I'm not going to give away) which in any other author's novel would be The Climax, the do-all and end-all, the tragic moment. But while writing clean, clear prose, Wolff inserts a much more complex view of the world and doesn't stop the story here. Bad stuff happens, characters make stupid decisions, but life doesn't stop there, nor is a life necessarily ruined by a major mistake.

The last section of the book is more reflective, the adult narrator contemplating the institution of the boarding school from afar, how he eventually became a writer, and what he learns about and from his old Masters. It would be very easy to lapse into sentimentality in this section but Wolff touches on innocence, self-awareness and memory so lightly that it never gets bogged down.

I'm trying to think of another writer who manages to convey the balance between masculine desire for power or dominance with the craving for tenderness. I'm not sure what it is about these passages that touches me so much, but the last line of the book (which doesn't give any of the plot away, if you are worried about spoilers) is an example that makes me all choked up when I read and re-read it:

"...he felt no more than a boy again--but a very well-versed boy who couldn't help thinking of the scene described by these old words, surely the most beautiful words ever written or said: His father, when he saw him coming, ran to meet him."

(Even such a heathen as I am, I managed to recognize the story of the Prodigal Son (Luke 15:11-32)--Thanks undergrad "Bible as Literature" class!)
Posted by Kate at 1:49 PM