Open the door (and please note the pretty glass door knob you are turning), come on in. Welcome to my thinking room. 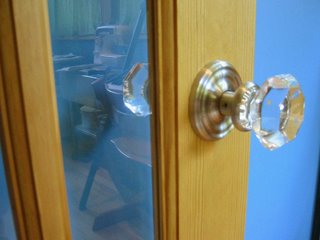 Yes, folks, after 5 years of weekend projects my office is finally habitable! I no longer have to tap away at my keyboard in a dark unheated corner of the house (though the duct work isn't actually finished in this room either...sigh). Now I have this lovely airy space to call my own: 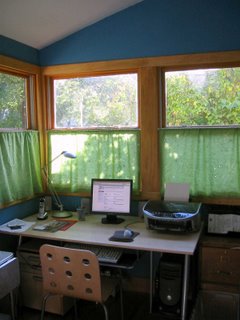 To the right of my desk is a whole wall of book shelves with the gems from my old collection now accessible and not packed away in my parents' basement, and with the rest (lots of good books, mind you, just ones I don't plan to read again or need to reference with urgency) donated to the Friends of the AADL bookshop.

Is it just a fluke that when unloading and sorting all the stored books I found three copies of Virginia Woolf's A Room of One's Own? Not at all. (Yes, two are now available for sale at the library!)

I was once castigated by one of my grad student officemates for liking such a white, bourgeois treatise, but guess what? I'm white and kinda bourgeois (with a little rebellious bent, I like to think). This officemate mocked Virginia for complaining about the difference between the meals that women at university were served compared to the relative splendor of the men's accommodations and, while I take her point that there are graver injustices in the world than bad food and drafty rooms, I think the essay makes its point and can be extended to people whose live in much more dire conditions. Later she lays it down: "Why did men drink wine and women water? Why was one sex so prosperous and the other so poor? What effect has poverty on fiction? What conditions are necessary for the creation of works of art?"

I'm not claiming that I'm going to create great works of art in this room, but I do have a new sense of mental freedom to now have a space of my own (and I have plenty of wine!) In a completely unintentional move, this room has also become the most feminine in the house--to start off with there is my pretty doorknob (which Brian picked out), and then there is this curvaceous light fixture on the ceiling: 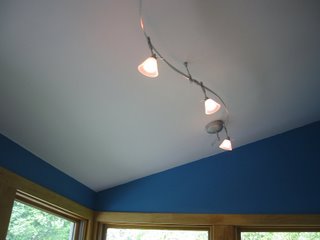 You can't tell when it is off (or really see it in this picture), but the shades have a gentle pink color which I was surprised by when I first turned it on, but have grown to like.

And then there is the unintentional femininity of the curtains. I had a dickens of a time finding any sort of fabric that would look ok with the (I now realize slightly eccentric) blue paint I chose and serve as half curtains for my five (count em' 5!) windows that look out on the street. I think the blue is the color of the perfect summer sky, but clearly most textiles were not designed to coordinate with the summer sky...I tried hanging rice paper, I bought some raw silk that ended up looking like a Chanel summer suit draped over a curtain rod, and finally I found amidst the chaos of the Joann fabric sales shelf this grass green linen fabric, with what I thought was rather subtle embroidery on it: 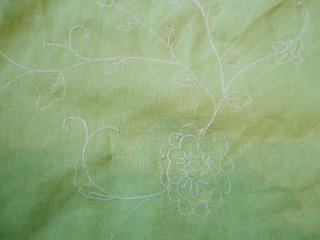 Only when I got home and unfurled the stuff I found out that the whole time (including when they measured and cut the fabric for me) I had been looking at the wrong side. When flipped over, it turned out that the embroidery was done in silver and there were a whole lot of sequins too! 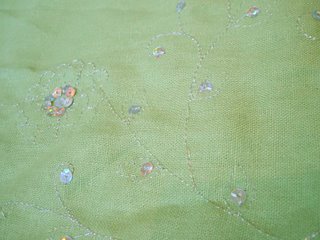 Surprise! A little more femininity than I had intended (Brian is not sold on it--though he admits it isn't his office--and complains that the place looks like a disco in the early morning when the sun coming in the East windows glances off all the sequins and makes the room all sparkly.) I would have been way too chicken intentionally to buy sequined fabric, but it is a happy mistake and gives the room a touch of whimsy and reminds me to lighten up and not take myself too seriously.

I have left-over fabric which, for a very brief moment, I thought about turning into a fairy dress for Fiona, but then it dawned on me that sewing the super basic straight seams for the curtains had pretty much maxed out my sewing skills. If anyone with more sewing skill than I have would like 1.5 yards of sparkly green linen, just let me know. Otherwise the cat will claim it as nap spot #58.
Posted by Kate at 4:30 PM

I love the room! My "office" is in the corner of the L made by the kitchen and the family room -- I would love to be able to shut a door every once in a while (especially if it had a pretty glass door knob...). Now about that fabric...if you're serious, I'll take it! I might even have some yarn I could trade you for it. And some Wallace and Gromit carrot seeds. Let me know!