Two weeks ago, my husband announced "Honey, I pulled a cottage out of my ass!" After recoiling in horror that such a structure was to be found up his colon, I realized that he was telling me that we were going on a last-minute vacation.

I spent the last week at a cottage called Snug Haven up at Georgian Bay, just north of Parry Sound.

It was just gorgeous; see, here is my kid looking poetic instead of frenetic: 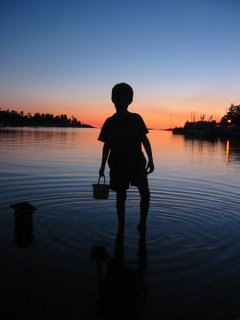 We canoed or kayaked almost every day: 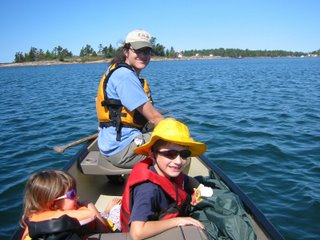 The last time I was there was when my now-six-year-old son was one. Brian and I took him on his first canoe camping trip out to Franklin Island and we visited the place again, this time for a picnic and a little skinny dipping. 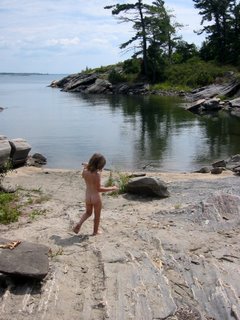 It is a most excellent thing to be the one with the camera when skinny dipping.

The landscape is so beautiful it is hard to take in--there is a lot of mica in the pinkish granite rocks and this means that everything sparkles. You stick your hand into the shallow water and stir up a little sand and it looks like someone just dumped in a container of glitter. And thanks to the glaciers, there are the coolest chains of islands to explore--I found this image on Flickr that gives you a sense of all the little bays and inlets there are to poke around in a canoe. And much of the area is Crown Land so you can pull your boat out of the water and explore the islands and let your kids run around like little mountain goats without fear of trespassing.

The cottage itself was pretty nice--incredibly clean and spacious enough for me to enjoy a week with husband, kids and my mother-in-law (yes, we brought Brian's ma with us and didn't abuse the built-in-babysitter feature too much). However--you knew there had to be a "however" in there somewhere, right?--the kitchen supplies were woefully inadequate. I adjusted to the electric stove quickly enough and it wasn't an evil one like our old "inferno". But I can't understand how anyone is expected to make a sandwich, much less a meal, with one crappy 3 inch serrated knife.

Note to self: things to bring to supplement otherwise-perfectly-satisfactory-rental-cottage:
I did remember to bring my little red Melita coffee cone and filters so I didn't have a replay of my disastrous encounter with an unknown coffee maker from last October.

So I spent last week cooking a lot of food on the grill (to get around the absence of reasonable sized pots), canoeing, kayaking, reading three terrific books--Don't Let's Go to the Dogs Tonight, Mary and O'Neil, and Small Island (reviews to come shortly)
and mostly managing to stop obsessing about the start of a new school year and whether Ian's new teacher will "get" him or not.
Posted by Kate at 9:10 PM

Having also been in a cabin this summer with inadequate kitchen supplies, I wonder if it's because the owners are cheap or because the good stuff tends to get stolen.

Welcome home! Looks lovely there. We tried to go to that area for our first anniversary, but we could find nothing available and kept creeping further out, ending up in Collingwood, which is not worth a six-hour drive.

Years ago - before children - we rented a cottage on the other side of Georgian Bay, in Wiarton. I remember the same problem with kitchen equipment. I had brought a knife and cutting board, but what I didn't have was a good saute pan. The first night I made a red sauce with a box of tomatoes we'd brought along from market, and it was a challenge. But I do remember that the kitchen was supplied with a beautiful set of 1950s-style dishes (maybe even from the 50s!), with little pastel circles on everything.

It was a lovely vacation. My days went something like this: eat - swim - read - knit - walk (repeat). Bliss!

Kate, it sounds like a fanastic vacation. I am very happy for you! I'll definitely be curious to hear about the books, I have been tempted to buy two of them in the stores...

Hope the "Back to School" time is fun for you and the kids! Can't wait to hear all about it.

We stayed at Snug Haven about two weeks before your visit- had the "Rock Cottage". The kitchen was full of stuff, the bbq was fairly new and worked okay. Nice place.