I have things to say pear chutney and some recent books I've read, but this week my energy has been directed elsewhere because I've been preoccupied with the fact that my kid wasn't eating lunch. The first week of first grade, he ate some of his lunch; by week two he figured out that if he doesn't eat, then he can play outside at recess for the entire lunch period. One day he brought home his lunch box full, except for having taken one tiny bite of a corner of his sandwich. That was it.

Unfortunately he actually needs to eat and not eating has led to some rocky afternoons.

Have I mentioned before that my sin of gluttony is clearly being punished by having a kid who is so indifferent to food?

So this week, I went into food-as-entertainment over-drive. 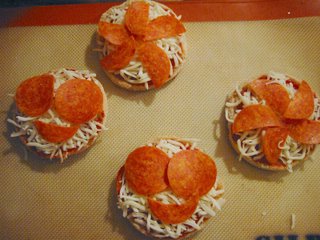 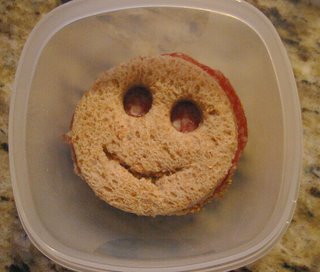 and made PB&J sandwiches shaped like flowers with little pieces of papaya or raisins as their centers. I sliced apples into hearts and used tiny pig-shaped cookie cutters to cut out a menagerie made of cheese.

I would foresee making the city of San Francisco out of Jello if I wasn't trying to keep food dyes out of his diet. (Really, you have to go click on the link. See the Transamerica building made of Jello. Then watch the video clip of the whole thing jiggling during an earthquake simulation.)

And today, the effort paid off and he brought home an empty lunch box. Not coincidentally, he also had a really good day.
Posted by Kate at 3:08 PM

Sorry to hear Ian isn't so into food...I can't blame him for wanting to play :) although the afternoons sound like it all catches up with him.

Don't remember if I originally found this blog on your site, if not you should check it out: http://veganlunchbox.blogspot.com/

The archives hold some amazing ideas for kids' lunches, although I do love your smiling salami sandwiches!!!

Here's a topic I can totally relate to with regards to the school lunch box. I do NOT understand why schools can't do a recess before lunch. These children get 30 mins for lunch and I sat in lunch with my 1st grade daughter 2 weeks ago and was shocked at how many left lunches barely touches. In order to get outside to play. Shoving food in their faces to try and 'hurry up' and eat. Ugh! That bugs the heck out of me!

Glad he finished his lunch. We have the same issues with my daughter. She's not finicky about food but she rarely ever finishes her lunch.

The way lunch is handled by elementary schools seems to be universally stupid. When my nephews in Minneapolis started all-day school, my sister wondered why one of them came home with food down the front of his winter coat. Because, she was told, they put them in their winter gear BEFORE they march down to the lunch room, to save time on going back to the room for coats before recess. They couldn't put some hooks in the lunch room? And when she volunteered for lunch duty, she was appalled at how fast they were forced to eat; teachers were marching around the tables barking, "Eat! Eat!" Combine all that with an already-indifferent eater (as my daughter often is too), and no wonder the lunch box comes back nearly full. But your efforts here are astounding, Kate, as usual.

I feel your pain. Packing a lunch for The Z has been a rough experience - they aren't allowed to have nuts at her school so that rules out the much-loved PB&J, she only wants a wee bit of turkey, a piece of cheese maybe, a yogurt, etc. And much of it comes home or goes into the trash. She did the same thing last year in all-day kindergarten. By the end of the first month though she had it all worked out and she had time to eat her lunch AND play outside.

Have you tried Sunbutter? You can get it just about most places but we get it from Trader Joes or Whole Foods. It's not from nuts at all so that might work for an alternative for you guys!

Kate, if it's any consolation, many first-graders go through the same thing at first. Mine is. I think mine spends the first 18 minutes of lunch gabbing with his friends instead of eating (he's very social). But at your son's school, they can't go outside the entire lunch period - they have to stay inside the first 20 minutes, then go outside. (But the slower eaters are subject to a "the big kids are coming, hurry up and finish!" drill as their time ticks down.) (I know this since I have 2 kids there, and eventually got the full story from the older one. :^)

By the way, your pictured lunches are totally cute! My 1st grader is not very picky about what he eats, *except* he turns out to be very picky about the temperature by lunchtime. For example, cheese sticks are out, because they're "too warm" by lunch time. Sigh. Half aagel w/ cream cheese (which he applies at lunch time) has been a winner so far, but I fear he will tire of it soon!

Hi Kate,
I'm thinking about starting a blog about reading and cooking, and in googling around I found yours (I don't knit though). I'm so struck by how many of your book assessments I agree with, good and bad (although I love Dive from Clausen's Pier and the Time Traveller's Wife), that I'm going to read some of your favorites that are new to me. So thanks for the recommendations!