My kid's mid-winter vacation starts this afternoon and while other families are heading South for a glimpse of the sun and some outside frolicking, we, being completely irrational beings, are heading North.

That's right, it isn't cold enough for us here in Ann Arbor, so we are going to a rustic cabin on Lake Huron up in Cheboygan State Park.

Is this my idea? Ahem. No. My kooky husband has decided it is high time the kids and I get a taste of winter camping, and he thinks he's being all benevolent and easy on us since we get to stay in a cabin rather than the 4 season tent. The cabin has a wood burning stove. And bunks. And an outhouse. Unfortunately the pump is turned off for the season so we'll be melting snow. And did I mention that we have to hike in a mile (with a 6 and 4 year old and all our crap) to get to this cabin? And did I mention that I've been sick and still feel pretty crappy?

Boo hoo hoo for me.

Deb has been trying to help me figure out why I am reacting so strongly against this trip since I am a gung ho camper in the spring/summer/autumn time.

I think there are two biggies with which I'm wrestling. The first one is pure and simple--an outhouse in wintertime. And the fact that I will be the one stuck taking the 4 year old girl to the outhouse when she has to go at 2 am and listen to her scream as her bare butt hits the metal seat. It just isn't fair being a girl.

The second one has to do with winter outerwear and claustrophobia. I have a little problem when it comes to clothes. Most of my friends know me as a pretty comfortable slob--t-shirts, soft jeans, floppy sweaters, and sneakers or Keens--and there are two situations in my life in which clothes become a real stumbling block for my happiness. The first isn't an issue for this trip because it involves wearing fancy/nice/formal clothes most of which leave me at the end of an evening ready to claw them off of my body. The other situation most definitely is: winter outerwear. This trip will involve every type of winter clothing all piled on: snow pants, boots, jackets, gloves, wool socks, scarves, hats, snowshoes (that 1 mile hike isn't on a groomed trail so we'll be blundering along). And even worse I'll be wrestling the two kids into their assorted winter gear.

I can tolerate this gear for an afternoon's sledding outing. I deal with it and then rip it all off as soon as I'm in the door. But the idea of spending 4 days getting into and out of all this confining crap sounds horrific. My fragile little sensory problem is going to be in full time overload.

So what is a balking donkey to do?

Focus on the carrot.

Because folks, I don't think I'd be going on this trip if there wasn't a serious carrot waiting for me the following week. A week from today, after my frozen toes expedition, I am heading off to here in the South of France where, for the next week, I will wake up to this view: 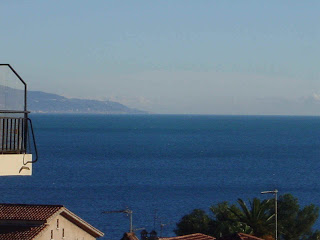 That would be Monaco off in the distance.

Here's the even better part--Brian is staying home with the kids and I am going to this blissful place with friends John and Ami, and Ami's sister Shelia.

I'm sure I'll miss Brian and the kids, but this will be the first time I've left the critters with Brian for more than a weekend alone (well, technically not alone since some adoring grandparents will be hovering about them). Brian and I had our week-long trip to Germany and France last year during which I was able to remember the pleasures of travel without kids. Don't get me wrong, I love traveling with the kids and seeing how they react to new places and situations, but sometimes a mama just needs a damn break.

And as if heading to the South of France wasn't good enough, there is another big plus: this trip is costing me very little money. Thanks to Brian flying off to China and other places he had a load of frequent flyer miles that got me my plane ticket. And the apartment we'll be staying in? Ami's lucky and generous step-mother won the week's rental in a charity lottery and gave it to her. Because we won't be spending money on plane fares and accommodation, I anticipate channeling some of the saved funds toward food. And I'll be in good company in this pursuit because both John and Ami have excellent priorities; that is to say, shortly after waking, both of them consider the important question "what are we going to eat today?" I'm sure the markets and restaurants around Nice will have lots of wonderful answers for us.
Posted by Kate at 12:46 PM