OK. I did it. I tried it. I even tried to have a decent attitude about it. But I am not a winter camping convert. 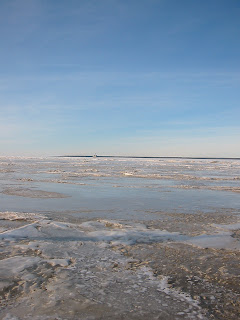 We looked at interesting ice formations: 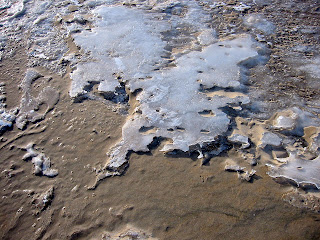 And slip-slided around a lot. It looks pretty enough, but there were 30 MPH winds whipping across the lake that (literally) lifted Fiona up and knocked her flat on her butt. At first I thought she was just slipping a lot, but no, she was actually being beat up by the wind. That's the way I like to spend my 4th birthday, what about you? 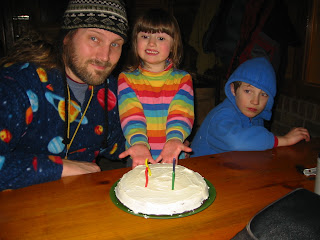 Thanks to the Outback Oven and Duncan Hines, on Saturday evening we baked Fiona's birthday cake. The oven thingy worked surprisingly well. And we all appreciated the sugar rush to keep us warm.

We gave up on going out on the ice after that first afternoon and when we ventured outdoors we stayed behind the trees to get some shelter from the wind. There were moments of levity, like when we built a snow tunnel through the drifts: 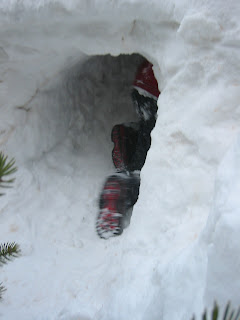 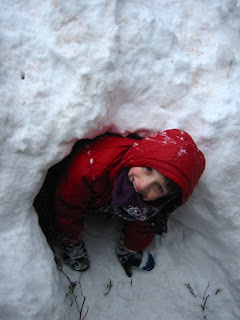 Coming out
And then there were times that the kids and I just got fed up: 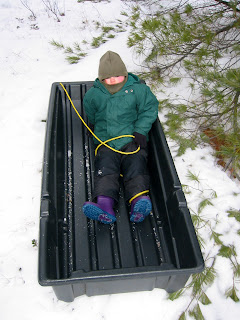 I'm cold, this balaclava makes my head look like a worm, and I want to go home.
The big bummer wasn't even the cold (though it was significant and we had to get up three times a night to put more wood on the fire or else wake up--or not wake up!--frozen), it was the darkness. Northern Michigan doesn't get that much daylight in February anyway, and Saturday was the only day the sun came out. Inside the cabin it was perpetual gloom. I imagine in the summer, with the long summer days, with doors wide open and the ability to sit outside without freezing to death, the place would be pretty nice, rather than oppressive.

I did a fair share of huddling before the fire with my headlamp on trying to escape my reality. Luckily, I brought an excellent book: 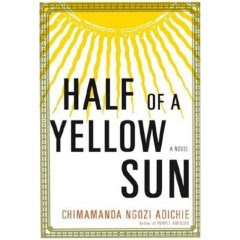 I'm trying to finish the last few chapters of Half of a Yellow Sun before I head off to France tomorrow. I can't say reading about the Nigerian/Biafra post-independence civil war in the 1960's gave me great feelings of levity, but it is beautifully written from a variety of different perspectives. I found Ugwu, the houseboy to a pair of intellectuals, the most compelling character. His views are raw and unvarnished; I hesitate to call him "pure" because he has a fair amount of goodly lust towards big bottomed women, but through his observations, sometimes as common and telling as how a yam is cooked, the war is rendered in sharp outlines, not muddied by the idealized political rhetoric that his boss spews out.

I'm going to try and blitz read it tonight so I can bring cheerier reading with me to Europe; you know, happy books like this one: 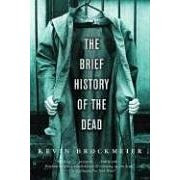 Hmmm...Maybe The Brief History of the Dead isn't the most upbeat selection...
Posted by Kate at 3:22 PM

As always, you have such a way with words Kate! If it's any consolation, your family is absolutely beautiful, I hope you have a great and rewarding trip to France!