I somewhat coyly mentioned earlier that we got a tart making lesson while in France. We managed to obtain this lesson via Ami's sister, Shelia (aka Kirk). Shelia was on vacation with us, but was also writing two articles about the region, one for an American Express Magazine (they only send it to very exclusive card holders, so being a lowly non-AmEx lass, I've never seen this one) and one for the New York Times Magazine. The latter piece (look for it in August in the special Travel edition of the magazine) was the occasion for our visit to the Menton lemon festival and through her press credentials and the contacts Shelia made at the tourism bureau, Ami, John and I got to tag along on some unique behind-the-scenes experiences.

One was a visit to a tiny little terraced lemon orchard where the low-acid Menton lemon is grown. John posted this lovely photo of the orchard we visited, over looking the old town. Here is my much crummier photo: 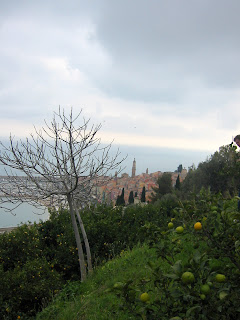 The bare tree in the foreground gave the Times photographer some trouble since it kept interrupting the scene. But it is a fig tree and the orchard owner told us he loves to come up here in the summer, put a chair in the shade it casts and eat its figs, so the tree is forgiven.
The other not-open-to-the-public event was getting a tart making lesson at the patisserie known for the best lemon tarts in all of Menton, La Cigale (the cicada--why name a patisserie after a bug, I don't know--anyone?). The owner and baker grows his own lemons for all his lemon creations (we also got info on making pate de fruits, lemon cake and a lemon custard cake thingy that I never caught the name of). 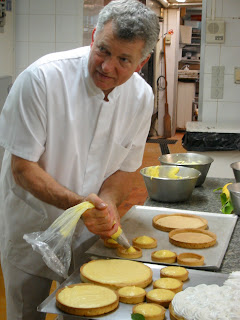 He was a lovely man and very forgiving of my erratic conjugation skills, though perhaps more distressed by my lack of skill piping meringue.... John posted a photo here of my attempt (the baker thought I was left handed I was so lousy with the pastry bag. Nope! Just uncoordinated!)

We tasted a good number of his tarts and they were lovely though I'm not sure that I'm sold on the low-acid Menton lemon for this recipe--personally, I like a stronger acid punch in my lemon deserts. They were paler in color and creamier in texture than the tarte au citron that I remember eating (quite often, thank you very much) when I lived in Bordeaux.

Side note: I did try one combination both the baker and the orchard grower recommended for thirst--thin slices of Menton lemon sprinkled with salt. 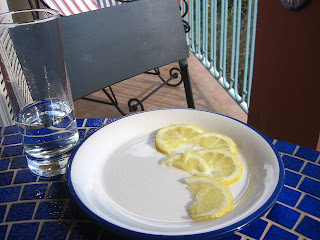 They were quite refreshing and the low-acid was great for eating the fruit raw.

Once we were back from our trip, I felt compelled to try my hand at making a good tarte au citron, albeit with our regular super market high acid lemons. Unfortunately, I wasn't able to translate the La Cigale recipe demonstrated to us from the proportions for 80 or so small tarts (which included something like 40 eggs) down to one 9 inch tart. Shelia gets to embark on that fun project and the recipe will be published in her New York Times piece so we can all give it a whirl in August. I also did not attempt to make the tart with the Italian meringue (Well, not yet. Once I get a candy thermometer and master the filling I'll take on the meringue issue.)

I did a little research and discovered that there are two distinct schools of tarte au citron making out there. The first recipe I tried was Dorrie Greenspan's lemon cream tart from her new cookbook Baking: From My Home to Yours (which is a terrific book I plan to post a separate entry on later). Her recipe sounded the most like the one we saw and tasted at La Cigale: it has a fully baked tart shell and the filling is a combination of eggs, sugar, lemon juice and zest that is cooked in a bowl over simmering water. Then the room temperature butter (a whole hell of a lot of it) is added a piece at a time to make an emulsion and create the creamy texture (Greenspan has you do this in a blender; I think the La Cigale guy did it in a mixer) . Then the cream is poured into the tart shell. This is a photo of my finished product: 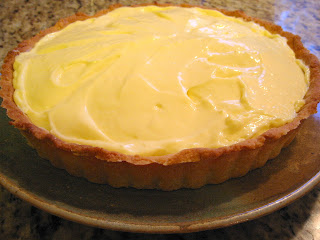 And then there is the other tarte au citron school with a baked tart which starts with a partially baked tart shell, mixes up lemon juice, sugar, zest, eggs and additional yolks and some heavy cream. This concoction is then poured into the shell and baked for about 25 minutes to set. And here is its photo: 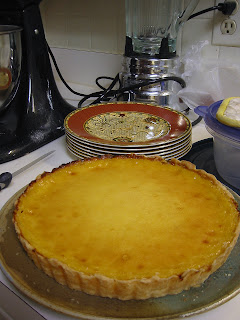 Since I made these two tarts within 3 days of each other, I managed to have some of both to do a taste test: 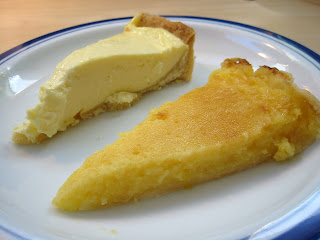 Lemon cream tart and baked lemon tart, side by side.
And the results? Hmmm. Well, both had their merits and neither tasted like La Cigale's version....

The lemon cream tart was almost too creamy and rich for my taste. The texture was lovely and silky (the zest is strained out) and there was enough lemon to brighten it up, but I think a recipe with less butter than Greenspan calls for might be the way to go. La Cigale's tarts were wonderful without being nauseatingly rich.

The baked lemon tart was much more sour--the zest doesn't get strained out of this one so it packs a lemon punch. But the texture was unimpressive. It was more of a looser lemon bar texture than what I expect in a tart.

I feel kind of like Goldilocks and her porridge dilemma--these two tarts were on opposite ends of the continuum and both were acceptable in some ways, but neither made me say "Ah! That's it!" or make me want to cut a second slice. One was too rich and the other not rich enough. So my quest continues. I think my next attempt will involve using the Greenspan/La Cigale emulsion method, but I'm going to tinker with the quantities. I'll report back if I come up with a recipe worth sharing!
Posted by Kate at 1:43 PM

The tart looks wonderful. I'm off for Cote d'Azur soon and found your blog when I searched on La Cigale. I'm staying a week in Menton and I'm definitely going to find this patisserie