Blame it on Spring: it's too early for strawberries, too late for (decent) apples and grapefruit, so I'm obsessing about lemon desserts.

I do plan to try making the elusive ideal lemon tart again, but I had a craving this week that did not involve crust so I took a little interlude in the land of puddin'cake. What's that term "puddin'cake"? It refers to a dessert that can't quite decide under which category it should be filed: lemon pudding cakes. 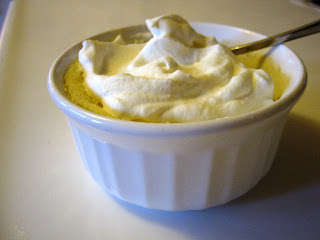 I've made a chocolate version of these which are rich and wonderful, but it being Spring, I was looking for something a little lighter and fresher. I saw the recipe on the Fine Cooking web site, a place I stop by now and again to check what they are up to. I stopped subscribing because the subscription wasn't cheap and there were too many issues that I'd glance at and not want to cook any of the recipes. But it has been a couple of years and as I've let a few other subscriptions lapse, I'm considering re-subscribing. This recipe certainly helps me lean in that direction.

The puddin'cake was true to its name--very airy cake on the top and gooey and more intensely lemony on the bottom. Bright flavors, lovely textures, just what the recipe promised. Really, the only thing I have to question about the recipe is their suggestion that serving it with whipped cream on top is optional. This is what the puddin'cake looked like without a whipped cream cap: 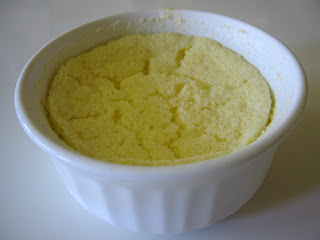 Pretty homely, eh? If you are making them just for yourself to eat while watching TV (yes, I confess, I did eat one just like this while watching crap on TV) and the aesthetic element is negligible, then go ahead, omit the whipped cream. The flavor is fine on its own. But this dessert is nice enough for company and company deserves something pretty (really, you do too). The whipped cream makes them look much more attractive; it also does take them up a notch in the richness department which is fine right now with there still being a bit of a nip in the air. When I make this in the summer (yes, I fully intend this recipe to become a regular part of my repertoire) I think I'll plan for a fresh fruit layer to cover the crevices in the top--some fresh raspberries or blueberries, perhaps with a sprinkling of powdered sugar on top, would both serve to disguise the unattractive part and would complement the lemon without adding a degree of richness which I don't find as appealing in the heat of the summer.

Position a rack in the center of the oven and heat the oven to 350°F. Butter eight 6-ounce ceramic oven-proof ramekins or Pyrex custard cups and arrange them in a baking dish or roasting pan (a 10x15-inch or two 8x8-inch Pyrex dishes work well).

In a large bowl, whisk the melted butter with 2/3 cup of the sugar and the egg yolks until smooth and light, about 1 minute. Add the flour and salt and pour in just enough milk to whisk the flour smoothly into the egg yolk mixture. Then whisk in the remaining milk and the lemon juice until smooth. The mixture will be very fluid.

Put the egg whites in a large bowl. Beat with an electric mixer (a hand-held or a stand mixer fitted with the whisk attachment) on medium speed until the whites begin to foam, 30 to 60 seconds. Increase the speed to high and beat just until the whites hold soft peaks when the beater is pulled away, another 1 to 2 minutes. Reduce the mixer speed to medium. With the mixer running, very slowly sprinkle in the remaining 1/3 cup sugar; this should take about a minute. Stop the mixer and scrape the bowl. Beat on high speed until the whites hold medium-firm peaks when the beater is pulled away, about another 30 seconds.

Scrape one-third of the egg whites into the egg yolk mixture, sprinkle the lemon zest on top, and whisk until combined. Gently incorporate the remaining whites into the batter, using the whisk in a folding/stirring motion. The batter will still be thin.

Portion the mixture evenly among the ramekins; the cakes don’t rise much, so you can fill the ramekins to within 1/8 inch of the top. Pull out the oven rack and put the baking dish full of ramekins on the rack. Pour warm water into the dish to reach halfway up the sides of the ramekins. Bake until the tops of the cakes are light golden and slightly puffed, and when touched with a finger, they should feel spongy and spring back a bit but hold a shallow indentation, 25 to 30 minutes. Using tongs, carefully transfer the ramekins to a rack. Let cool to room temperature and then refrigerate for at least 2 hours and up to 24 hours before serving, with whipped cream if you like.

I saw that recipe on their little e-mail newsletter and thought "I wonder if I should send that to Kate>" Well, looks like your cooking fingers are everywhere. Your post convinced me to make it more than their posting about.