What we do when it is too cold to camp

While the weather was worse in Michigan this past week, it was a little shocking to go to DC and find snow on the cherry blossoms. The small people had their spring break (these kids have had some sort of break every other week since the new year--a teacher in-service day here, a week there--I don't know how parents without flexible schedules can handle it.) Normally we head southish to do some camping this week, but as a frigid blast was covering every place within a reasonable driving distance, we went to DC and Pennsylvania for a little cultural tourism instead.

As completely disgusted as I am by many of the people in our government, there is a weird feeling of ownership when it comes to DC. Maybe it was just knowing that a wee portion of my taxes cover the free admission to all the Smithsonian museums, or the swarms of tourists from all over the country, or just being able to walk from the capitol building to other buildings of major governmental importance, but it did remind me that patriotism shouldn't be a word co-opted by right-wing discourse. 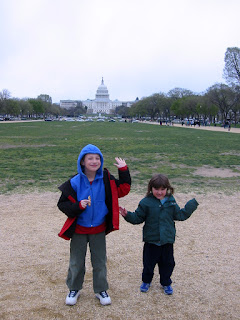 Two kids, on their way to the Air and Space Museum, trying hard not to become airborne themselves due to the fierce winds.
I'd have to say one of the biggest pleasures of the trip was occasioned by a very small creature: 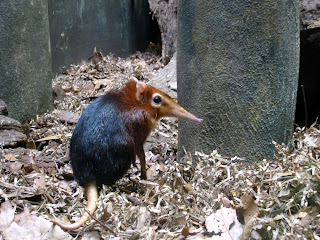 The Elephant Shrew
All the people crowding around the panda area at the National Zoo, elbowing each other in the ribs to get a glimpse of a rotund, pee-stained bear lazily eating bamboo do not know what they were missing. We loved the small mammals house more than any other place in the zoo and spent about twenty-minutes watching this little elephant shrew with his incredibly expressive snorkel of a nose scamper and peek and hide with his two other family members. We were laughing so hard that we drew a crowd. The absurd-looking and very wriggly naked mole rats were a close second in the humor department.

Food wise, traveling with my kids is always a challenge. I always want to hit the local ethnic places and they want a little culinary security when the rest of their world is in flux. Despite these challenges, I was determined to get some Vietnamese food while in DC.

Vietnamese food and DC go together in my head because I first tasted this cuisine when my parents took me there for my museum extravaganza when I was ten, and being a pretty flexible eater (for a kid) they took my sister and I to our first Vietnamese restaurant. I don't have strong memories of the food, but I do remember the lemonade served--it was fresh squeezed, lightly lemony and sugary, and I loved it. I remember being so surprised that my mouth wasn't being assaulted by excessive acid but that the flavor wasn't washed out, just delicate.

My kids, being no where near as flexible eaters as I was, would not go quietly to a Vietnamese restaurant (maybe Fiona on her own, but she follows Ian's lead when she sees him reject unfamiliar food). But thank god for take out. I hit a Safeway and got them frozen mac and cheese that we could nuke in the kitchenette at our hotel, then called in an order to a Vietnamese place that turned out to be really good called Minh's (their web site is still under construction). I felt reassured when I went in to pick up the order and saw mostly Asian people eating there.

I got us some classic Pho: 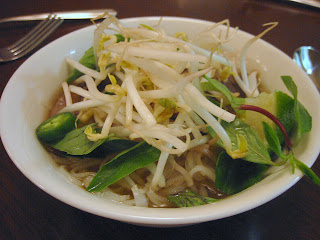 An eggy crepe studded with shrimp and stuffed with bean sprouts: 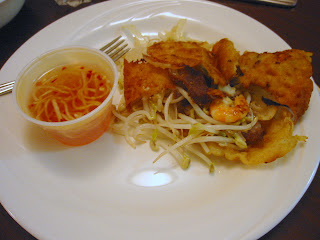 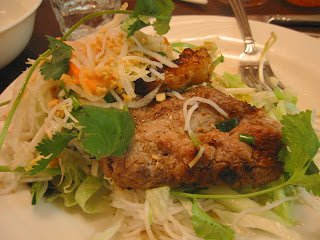 It was terrific stuff, the only change I would have made would have been more garlic and fish sauce in the dipping sauces because I like mine on the pungent side.

I would have liked to eat some more Vietnamese food while we were there, but felt grateful to have managed even a little. We did get to have another good meal which was made even more memorable for the company. Debbie met us at a kid-friendly Italian restaurant and I got to see her break pretty much every major Passover and Kosher food rule in one swell pizza! 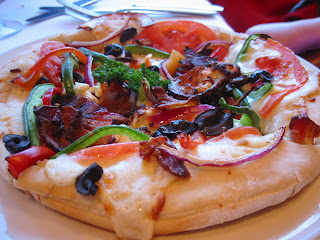 Let's see, we have leavened pizza crust, bacon, and the mixing of meat and dairy with some gooey melted goat cheese...
I had an arugula, radicchio and Parmesan salad with a nice lemon dressing and a plate of good penne with broccoli, garlic, hot peppers and lots of anchovies.

The next day we headed north to Lancaster, PA. It may be the center of the Amish population but (little did I know before being married to Brian) it is also a pilgrimage place for choo-choo fanatics. I won't bore you with choo-choo sites other than to say that the Pennsylvania Railroad Museum is worth a visit, even if you are only mildly interested in trains. And Brian and the kids were kind enough to leave me behind at times so I got a bit of fiction writing going rather than waiting impatiently for them to emerge from various train sites and shops.

As a break in all the train talk, I organized a little outing to Hershey, PA to take the kids to the World of Chocolate: 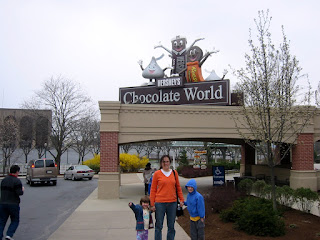 I'm no lover of Hershey's chalky chocolate but I am a great lover of things that make my kids' faces light up. (For a wonderful, funny examination of enduring crap and loving it because it makes your kids happy, you must read Dutch's entry on how a grown up can cheer for Elmo.)

The rampant consumerism of this enterprise stunned even me--I was expecting buying chocolate to be a big part of the place, but was amazed that the only "free" thing in the entire place was a 15 minute ride that explained how chocolate is made in a Hershey's factory. We went on it twice and the second time through, Fiona was so excited to see these mechanical singing cows that she mooed to them: 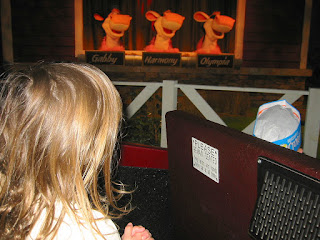 We headed into the insane gift shops and let the kids toss around Hershey Kiss pillows, test drive Hershey matchbox cars, and squeeze many a candy themed stuffed animal. Thankfully the kids were pretty happy when, at the end of wandering among chocolate merchandise, we offered to get each of them a 55 cent candy bar and thus exited the place having parted with only $1.10.

If you are a parent and are into, you know, making your kids happy out of their mind, you might want to take a trip to the Hershey mercantile enterprise, but I do have to make a plug here for a much better candy factory tour. Back in the summer of 2005 when we were back in the Bay Area showing the kids my old stomping grounds and eating good burritos and sushi 'till we felt ill, we also ventured inland a little ways and stopped at the Jelly Belly Factory in Fairfield, CA. 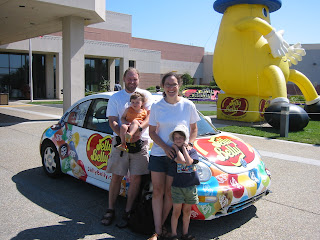 The tour of this place was awesome as it actually took you over the real factory and not just some toy ride version and it was 40 minutes long. There were people buzzing about, making huge batches of jelly beans and cool robots packing up the stuff. At the entrance they have a (free!) Jelly Belly tasting bar where you can stand and request flavors until your own belly is pretty jellyish. They even encourage you to try weird flavor combos like Mango Tango Salsa (chew together 2 mango, 1 lemon lime and 1 jalapeno jelly belly all together; it isn't as gross as it sounds).

This place had such an impact on Fiona (who was 2 years 4 months old at the time) that it still appears in her stories. Many evenings at bed time, we'll be asked to tell the story about how she and her favorite stuffed animal of the moment got on a train to go to the Jelly Belly Factory. On the way there, they have lots of adventures all of which culminate in a Jelly Belly sugar feast at the end of the trip.

Now, thanks to this most recent venture into kid candy land, our stories involve getting on a train in Hershey, PA with the singing cows and taking them on a trip across the country to the Jelly Belly factory.
Posted by Kate at 7:33 AM

Hallo, Kate--you don't know me but a friend of mine sent me to your site. I often enjoy your writing and swoon over the lovely food photos. This entry in particular serves as a snappy reminder that places like Hershey can enchant children even though we adults (over-thinkers) pause in horror at the sheer commercialism of the place. It's magic how children weave events such as a visit to singing cows into their imaginary adventures.

Hmm. . .O dear--realized that I'm signed on as "Chidester the Gumberry" (children's literary blog alter-ego) though I'm not in character at all--I'm actually Kim at the moment. Anyway, from Kim, thanks for the intriguing blog! O--and the lemon dessert looks divine! Cheerio!