Gifts for one obsession

I had a birthday this week and received some lovely gifts, all of which supported my dominant obsession for the moment--cooking. Reading is still necessary for my sanity, but knitting and writing seem to be taking a bit of a summer vacation, and truth be told, with the kids out of school, the time needed to be stationary (for knitting) or to have uninterrupted time to think (for writing) is not in abundance. Perpetual motion and crisis management currently fills my days. But hey, I can still cook--we do have to eat, after all, and I am much better able to handle crises when I've eating well--and now I have new fun stuff to play with in the kitchen.

The first gift I received was this new Rancilio coffee grinder: 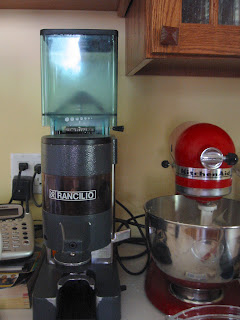 It does a fantastic grind for espresso, my only gripe is the size--you can see how huge it is when compared to my Kitchen Aid mixer. It is a commercial-grade piece of equipment that Brian got from a company that reclaims equipment from failed restaurants. New it costs over $400, but through the reclamation business Brian got it for a little over $100. Now I just have to get used to its size.

Lately, I've been wanting to try recipes that come from European blogs (like, say, Chez Pim, or La Tartine Gourmande). But in Europe many recipe measurements are by weight, rather than volume so I've been making some wild guesses. But no more! My parents gave me this: 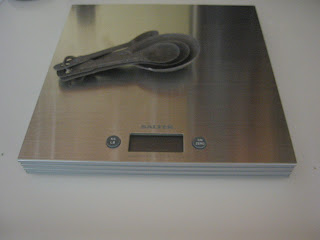 A lovely little Salter scale which can weigh things from 1/8th of an oz up to 11 lbs. And it can switch to grams and kilograms for those sensible European modes of measurement. Brian is also thrilled by its arrival since he has begun brewing his own beer and needs to be able to weigh out precise quantities of yeast. I particularly appreciate its size (especially after receiving the Rancilio grinder)--it is slim, lightweight and a breeze to tuck into a drawer when not using.

When not prowling European food blogs, Brian has made sure that I'm not at a loss for new things to cook. He gave me the following books: 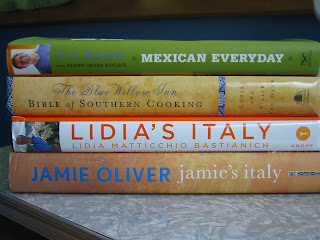 Rick Bayless' Mexican Everyday, The Blue Willow Inn Bible of Southern Cooking, Lidia Matticchio Bastianich's Lidia's Italy, and Jamie Oliver's Jamie's Italy. The last two I've checked out from the library before and really liked. I've started plowing through the Bayless book and already have gleaned good information (best way to cook dried beans perfectly--the slow cooker! Last night I made some delicious pintos for dinner). The Southern Cooking book is so I also cook some foods that Brian adores. Sometimes I think he tries to figure out how to take vacations in the South just to satisfy his barbecue, fried okra and biscuit cravings. (Of course, I heartily approve of travel that is based on one's belly.) So maybe we'll be able to stay at home here in the much less humid-North for the summer and still satisfy those cravings.

And then I got myself a little gift. Any of you do this for your birthday? I haven't been doing it for long, but I really like the principle of giving myself a gift--something that is a little bit of a splurge. This year I chose three citrus flavored olive oils from O. 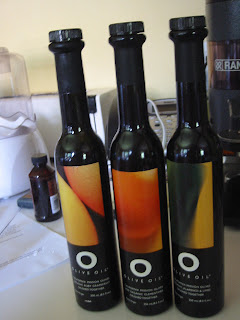 I chose the O Sunshine Sampler which consists of their Ruby Grapefruit, Clementine and Jalapeno Lime citrus oils. They are fabulous. So far my favorite is the Clementine oil--I've been having it drizzled on top of some chevre on a piece of baguette and it is just wonderful. I've also tried the Jalapeno Lime on a fresh corn salad with feta and cilantro, and the Ruby Grapefruit on a spinach salad with white beans, toasted walnuts, goat cheese, thin sliced radishes and muscat vinegar (inspired by an entry on the food blog 101 Cookbooks).

And then in the evening on my birthday, Brian and I went out to dinner at the Five Lakes Grill for their prix fixe "Taste of Spain" dinner, which I will have to blog about a little later because the small people are stirring and I haven't yet fired up that Rancilio grinder to brew my morning coping elixir...
Posted by Kate at 6:37 AM

Happy Belated Birthday Kate! I love the gifts you received, they are so appropriate and also so fun. I have the Bayless cookbook and do enjoy it a lot. He is very eloquent at writing about the culture and food in a way so you don't have to follow a recipe verbatim - you can be inspired to futz with it a bit... Of course, it does make me miss his restaurants in Chicago sometimes :(

The oils sound delicious, I'll have to check them out someday soon too...keep us posted on your many creative uses for them!

I'm a fan of cooking beans at the other end of the spectrum: the pressure cooker. Largely because I often don't think of it until the last minute. But it's very handy.

Oh if I had a pressure cooker I would use that! It is one piece of kitchen equipment that I have yet to obtain. Maybe I should ask for one for my next birthday?

As a follow up to our e-mails of a year ago and your topic today - here's a kitchen gadget I strongly recommend: The Jaccard needle tenderizer.

I got this as a recommendation from the chef we employ at Swift. He said he uses on every cut of meat. It's great for tougher (and lower cost) cuts of meat. I know you like grass fed beef, which is more muscle than fat. A Jaccard would be great. It helps break the fibre and also improves the meat's ability to take a marinade.