I just finished Flight which was fantastic, but I will save my comments until after my book group meets in late July to talk about the book here. I started Michael Chabon's latest, The Yiddish Policemen's Union, and it is terrific, too. The alternate reality of a temporary Jewish homeland on an island off the coast of Alaska where the primary language is Yiddish takes some mental adjustment; the prominent humor is very, very ironic and Jewish. I was snorting with laughter when I read this passage in which a gentile reporter who learned Yiddish from "some pompous old German" and whose Yiddish is described as "like a sausage recipe with footnotes" tries to talk to two hardened (Yiddish) homicide detectives:

"A need to repeat the rash threats of yore does not, I assure you, exist, Detective Shemets....Evergreen and ripe with the sap of their original violence they remain."

Which later gets him the response:
"Brennan, please, I beg you to speak American....What the fuck do you want?"

But the book isn't just funny. Though I'm only on page 99, it already has moments of beauty that are sad, in a wasted, persecuted Jewish sort of way. To say this book gives me great insight into my father and his predecessors is a bit of an understatement.

I finished the Branching Out scarf and it looks like it will be the perfect length--not too long for a partly decorative, partly warming piece of neck wear. Here it is being blocked:

The Artfibers Ming yarn was luscious to work with--Thanks again to Deb for the treat! I actually had someone in a doctor's waiting room ask if they could touch the yarn because it gives off that kind of glow.

I sticking with sturdier stuff for the Pea Pod Baby Set I just started knitting for my kid's pre-school auction this fall. I have no patience with the yarn called for in the pattern: a Debbie Bliss yarn with cashmere that is supposed to be dry cleaned. That strikes me as a recipe for a baby sweater that never gets used; I don't know about the babies the designer has met, but my kids copiously urped breast milk all over their clothes (and mine) pretty much every ten minutes and cashmere was not a part of our wardrobe.

I tried the Cold-brewed iced coffee method from the NY Times and thought it was ok. The way the writer, Cindy Price, described the resulting beverage in the article made it sound dramatically different from the "normal" iced coffee I usually make (that is, chuck the leftover coffee from hubby's morning brew in a jar and shove it in the fridge until mid-afternoon when the caffeine is absolutely necessary to keep the kids from making mincemeat out of me before Brian gets home. If I'm desperate I swill it straight from the jar; if I have a little more prep-time I actually pour it in a glass with ice cubes! and maybe a little splash of milk!) Price describes "hints of chocolate, even caramel" coming out of the cold-brewed version. Well, I made a batch of the cold-brewed stuff (1/3 C ground coffee mixed up with 1 and 1/2 C cold water and left overnight to steep, then strained through a coffee filter). It was fine, but the angels neglected to play their trumpets over my head. I couldn't tell the difference between that and the stuff I usually drink. It was kind of nice not to have to heat up water for coffee that you want to drink cold, but as I am one of the few, the proud, the non-garbage disposal owners, cleaning the coffee grounds out of the jar was a messy chore. If you do have a disposal and can just swish it around and dump it down the drain, then this method might be good for you.

However, the angels were in attendance on my birthday when I tasted best red wine I've ever had the privilege of drinking. Brian and I went up to the Five Lakes Grill for their monthly theme dinner; this month was "A Taste of Spain". The food was good, but not mind blowing--there were some tapas, a nice gazpacho, some garlicy big shrimp, a fancified paella and an orange creme brulee. Everything was very nicely prepared, but none of it rocked my world. What did set me spinning was the red wine that was paired with the "Modern Style Paella": 2001 Remelluri Rioja. It was so ripe and rich and smoky and fruity I just about ran out of wine adjectives to describe it. It was this wine, and not the food, that Brian and I talked about on the way home. I've found it listed on-line on sale for $22.99/bottle, but I'd rather find a local source for it. 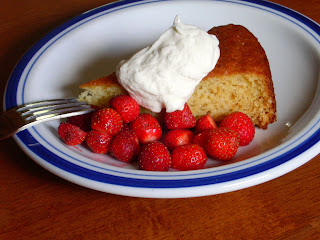 The cake is very springy and moist and the small amount of vanilla and rum in the batter give it a big boost of flavor. The strawberries pictured above were the very end of the Michigan crop (at least around here). Fiona and my mom and I went out and picked berries at Rowes earlier this week. The berries required sunstantial work--there weren't many per plant and they were small. But the small size was due to the stressed-out nature of the plants at the end of their fruit producing season and stressed-out, tired plants produce incredibly sweet and perfumed berries (if only all stressed-out, tired entities had such lovely results...). These berries are about as close in flavor to a wild strawberry as I've ever tasted coming from a cultivated plant. And they pair wonderfully with the yogurt cake and a big dollop of whipped cream.

I have an idea that I don't want to curse by talking about it. Sorry.
Posted by Kate at 11:44 AM

Yeah, I tried that cold-brewed iced coffee too and didn't fall to my knees in ecstasy either. Your method sounds better.

Wow, I'm glad I read your post about the coffee. Now I won't have to bother doing it. I too, usually do the same as you, refrigerating my leftover coffee and I freeze some in a ice cube tray. It's pretty good but the NY times article had me doubting my method. Thanks for sparing me the mess.