Despite the appearance of a tornado in Whitmore Lake at 4 PM and some crazy strong rain shortly thereafter, the skies cleared in time for us to head out to the 54th Annual Manchester Chicken Broil last night. I've meant to go to this every year and never got my butt out there, but finally got to witness the smoky glory of 19,000 lbs of grilled chicken. The timing was also terrific as this is Art Fair week in Ann Arbor and when hundreds of thousands of people pour into our town, well, I want to flee in a different direction entirely. And it helps if that direction has smoky chicken air to guide me. 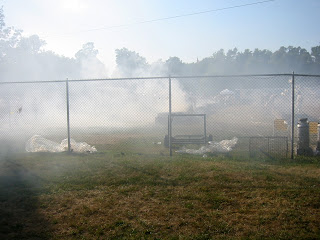 I don't even want to think of thevolunteers who did all the cooking.

When the wind picked up and the smoke cleared for a second I was able to see the actual humans bent over the pit: 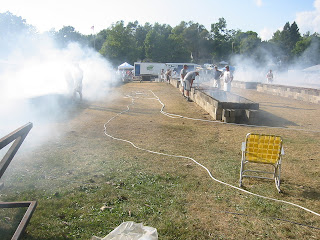 Sparkles-the-Rescue-Cat (Fiona's most frequent alter ego) was excited about getting to sink her teeth into some chicken. 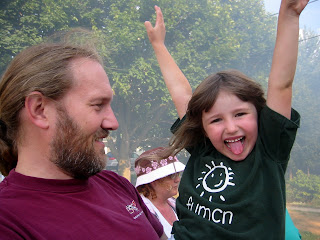 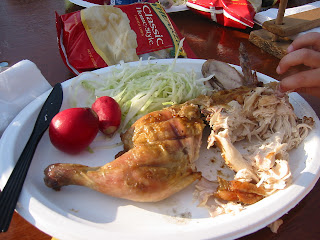 Half a chicken (which you can see she is already decimating), radishes, a pile of really good coleslaw (which I will attempt to reproduce tonight and post the recipe if I am successful), potato chips, roll and butter and soda, ice tea or water. The dark meat of the chicken was fantastic, the white meat was a little dry, but better that than an undercooked chicken. The food safety geek in me was happy to hear the announcer say that they use an instant read thermometer to temp test every chicken before it is served--with approx 14,000 dinners, that is a busy thermometer.

I was amazed by the efficiency of the operation. We waited for about 10 minutes in one (smoky) fast moving line outside the gates to get our tickets but once inside we went through the food line immediately and were sitting down at a table before a) any of the kids started to complain and b) we lost them in the crowds.

The proceeds of the Chicken Broil go to building playgrounds in the town--and I wish I had remembered to take a picture of the playground the kids managed to drag their full bellies to after dinner called the "Chi Bro Playground" whose name clearly tells you who paid for the place. They had taken some pretty standard playground equipment but had customized it with panels on the sides which transformed the structures into a huge fire engine and a police car. The actual equipment was pretty basic--tubes, slides, fireman poles, platforms and steering wheels--but by decorating the thing with the panels it opened up a great level of imaginative play to be mixed with the standard crazy kid-at-a-playground energy. I heard one mom whose kids were playing in the back of the police car happily telling her kids they were dangerous criminals and she was taking them to jail, which would make a nice change from my kids repeatedly threatening to take me to jail...
Posted by Kate at 7:15 AM