Look what I made! 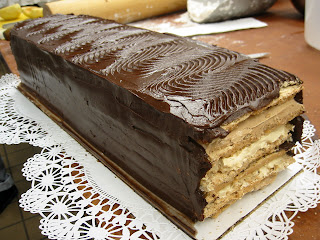 I can't actually testify as to how the Marjolaine tastes all together, since it was to be served in the restaurant at WCC, though I did sample the parts that made up the whole--the hazelnut meringue, the chocolate and praline French butter cream, the ganache. I imagine that put together they packed quite a wallop of fat and sugar intensity.

I tried a couple of the plated desserts this week and wasn't terribly impressed with either. There was a raspberry sorbet with Champagne sabayon 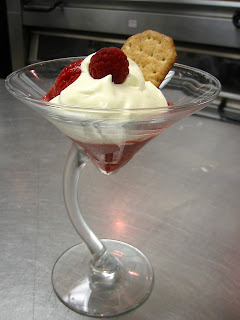 and vanilla souffle with chocolate sauce. 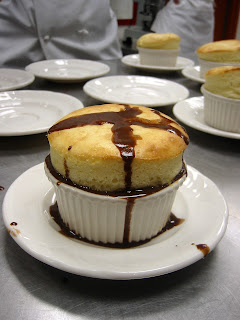 The sabayon and the sorbet were fine, but not memorable, and whose idea was it to stick a wheat cracker in as a garnish? Ick. The souffle looked pretty but really tasted mostly of eggs, not of vanilla and the chocolate sauce was watery and tasted like cheap chocolate was used (it probably was cheap chocolate since it wasn't going to be served to the public.)

So the noshing at the last class wasn't as good, but at least my Marjolaine turned out!
Posted by Kate at 2:18 PM