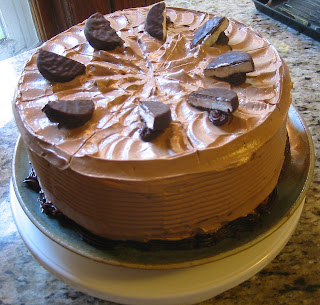 I'm still pretty crappy at getting the buttercream to look right on the cake, and not having the right equipment (offset spatula, cake comb) didn't help the matter. But the taste of the buttercream was by far the best thing about this cake.

I've never liked the kind of buttercream that you make with powdered sugar--it is just too damn sweet and makes me feel like I'm going to go into diabetic shock. And frankly, it freaks me out to see a recipe with a whole pound of powdered sugar in it.

One of the best things I have learned in my pastry class is that there is a buttercream that I can love--French buttercream. There is only 1 C of granulated sugar in the recipe which makes a buttercream that is far more palatable to me, and it also has a great texture with none of the chalkiness that can come from powdered sugar. The technique sounds like a pain in the ass when you first hear it, but it really is pretty simple--beat up some egg yolks until they are thick and light. While the mixer is beating away, heat up the sugar with 2 oz water and make a syrup that reaches the soft ball stage (240 degrees). Then with your mixer still running, slowly pour the sugar syrup down the side of the bowl (so it doesn't splatter or make little hard droplets in your buttercream). The heat of the sugar cooks the yolks so they are safe to eat. You can add your melted chocolate and peppermint extract now. Then you leave the mixer running and beating the hell out of the stuff until it is pretty cool. Then blop in pieces of room temperature butter until it is all combined.

The frosting is silky smooth with just the right amount of sweetness and richness. Brian tasted it and his whole face lit up--it is that good--and both of us had to resist sitting down and eating it with a spoon.

enough to frost and fill a 3 layer cake

After browsing your latest entries I am starving, for a bizarre meal of salade vert and rich buttercream. Looks delicious.

My boyfriend loves bannana cream pie. Is that considered a pastry? Do you have an easy recipe for it?

I'm making a cake tonight and am pleased to see that Rose Levy Beranbaum's ("The Cake Bible") buttercream is done this same way. In fact, I don't think there's any powdered sugar in any of her recipes. One more reason to love that book.

There's also a very easy glaze in Rose's book that I like: Heat 1 cup of heavy cream and pour it over 9 oz. of shaved/chopped bittersweet chocolate (or chocolate chips). Let it sit, covered, for 5 minutes, then stir well and pour over the cake. It hardens a little into a shiny exoskeleton. (Actually, it doesn't get that hard.) It's not as much of a show-stopper as a good buttercream, but mild and tasy, which is sometimes what I want. And can't argue with how fast and easy it is.

i feel the same way about American icing. my teeth hurt from the sweetness.

thanks for the French butter cream recipe, i've been looking for one but i didn't really know what it was called.