In between dealing with the zucchini and tomato overloads, small person wrangling and pastry making, I've been slowly attempting to improve our living space. Our house is a work in progress and Brian and I are leisurely at best, and lazy at worst, about making the necessary improvements (did I mention the three foot deep pit that rendered the front door inaccessible for over a year?). But every once in a while we get a burst of improvement energy (or present environment disgust) and tackle another project.

The room which is currently our (small) living room (previously the dining room and before that, the kitchen--we've been shuffling rooms for a while now) finally got walls in August (trim coming in November!) It was down to the studs for a few years, then we insulated it and stuck up some plywood, and three years later I finally had the energy to push for drywall.

It isn't the greatest mudding job since I did it myself, but it is my hope that within the next 3 years (ok, maybe 5 years...), we will have started to build a living room addition on to the back of the house and the current living room will be transformed into a hallway/pantry and a half bath. Thus the lumps and bumps in my mudding will eventually be covered with shelves or tile.

After the drywalling, I painted the living room. First a hideous shade of too-bright almost-lime green (another of those "Whoops! looked ok on a swatch" moments), and after a couple of days of squinting and thinking that I needed sunglasses to stay in the room, I repainted it a softer green. I picked a Martha Stewart paint swatch (Fern Shoot) since all her colors are sort of subdued and I wanted to be sure we wouldn't be blinded by the room. I had them color match it using Olympic paint since it is zero VOC and I've done enough damage to my brain over the years without voluntarily inhaling toxins.

I like the color--it is cheerful without being overwhelming, but it does represent a decorating challenge. It needs neutral colors to balance it out. I have a bunch of nice black and white prints of my dad's photography that are matted and framed in silver frames that will look good on the walls. But our furniture? Well, that's another story.

Our couch used to be red twill, though it has faded and been beat up over the years of pet and kid ownership. It looked fine in a cream or white room, but horrific with the green walls. We have a beige ultra suede slipcover for the thing that we are currently using and which provides a neutral couch experience (a rich chocolate brown one would be nicer, but right now our aging and ailing cat often is puking on the current one so this is not the time to invest in an upgrade). Big bonus--the thing washes and drys well and fast.

So it is to the couch throw pillows I have turned my attention. I bought some fabric from Fabric.com to cover the hideous, but really comfy big pillow: 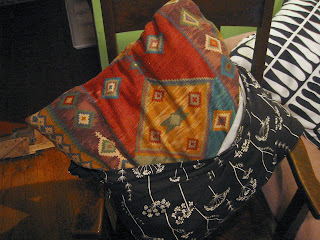 In the process of being swallowed, ahem, covered.
And I think it looks pretty good next to the nifty $7 Ikea Hedda covers. 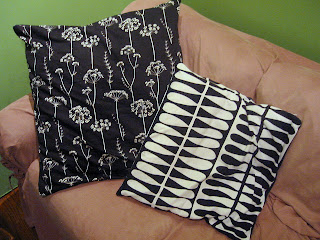 I like the way the Queen Ann's Lace botanical print softens up the modernist plant on the Ikea pillow. Much as I love mid-century modern stuff (that would be my Dad's aesthetic and the one that I grew up with), Brian and I are a little too quirky to go that pure route. But the modernish-accents help keep our weird stuff, like this print (look closely--under each cow is a car brand or model), or Brian's Fez collection or my subversive toile, from looking too kitchy.

I also bought a couple of yards of the negative of the pillow fabric (currently on clearance): 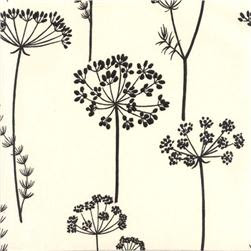 I haven't decided what to do with it yet--cover some more pillows? Make a roller shade for the window in the room?
Posted by Kate at 7:56 AM

What, the living room is where the dining room was? Wow! Big change. I would probably get lost now in your house.

I think a roller shade would be very nice looking.